Are Free Market Forces the Solution for Our Country’s Health Care Woes? 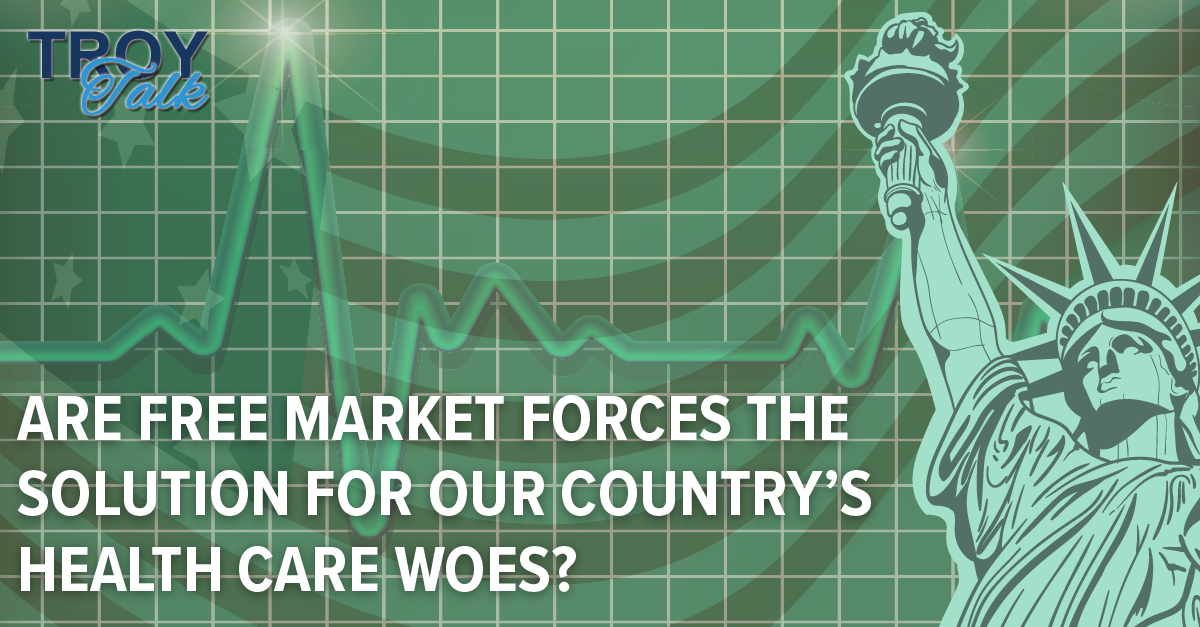 There is no topic in recent times that garners more attention than health care, except for the never-ending debate on higher taxes. Cupped into the debate surrounding health care in our country are the oftentimes competing concerns of cost, quality of service, availability, and who pays for what.

As this issue has once again been thrust to the forefront of the national debate, we should begin by trying to establish what precepts we can agree upon. Regardless of political ideology, I firmly believe that the overwhelming majority of Americans want everyone to have access to a high quality health care system for all. No one should die in the United States of America because they don’t have health care (though an estimated 45,000 die annually for that reason). I also believe unanimity exists that this topic is numbingly complex both in scale and potential solutions, despite what some have publicly stated.

To set the foundation of this discussion, we should also acknowledge, and again I believe that regardless of political ideology we can agree, that we have among the highest health care costs in the industrial (read “advanced”) world, yet we don’t make the top 10 of countries in the world for life expectancy. (As of 2015, we’re 43 out of 224 countries.)

Now, the disconnect appears around solutions. Some argue that if market forces were the mechanism for deciding cost and allocation of health resources, the system would be fairer, everyone would have access to coverage and we could stem the seemingly never-ending cycle of increased costs.

Writing in the Pacific Standard, Dwyer Gunn captures the spirit of the conservative argument, noting that their approach is “a combination of high-deductible insurance and health savings accounts” as their foundation. “Such a health care composite … would cover all ailments, with the former covering unforeseen emergencies like cancer or a car accident, and the latter being applied to the routine, predictable care that most people require.”

They would also argue that if we arm consumers with good intelligence, that is, all the necessary information available, they would be more apt to make the correct decision by choosing more carefully.

The approach here is “skin in the game.” If it’s your money (to a high degree), you’ll be less likely to abuse the system for unnecessary care, and that it will nudge you (if not push you) into searching for lower cost solutions. Additionally, increasing price transparency in health care should be a central component of any proposal to address this issue.

The free market solution to health care presumes, of course, that everyone is fully equipped to handle the complexity, nuances and cultural deference (toward medical professionals because in part, they speak a “different” language) to make those choices. In short, they would turn health care into a commodity. Sure, sounds good, but have you ever tried to decipher a hospital bill?

The reality is that health care is not a commodity. It’s not like buying a car or the latest model cellphone. If you think it is, try treating your health like a commodity if you rupture your spleen, need radiation for prostate cancer or if you came in contact with say the Zika virus. I promise you that “medical window shopping” is not in your health’s best interest.

And one terrible consequence of the market forces idea, for example, is that as prices rise for health care, more people opt out of the system. In the United States at the start of the global economic crisis in 2007, a survey revealed that 26.5 percent of Americans reduced “their use of routine health care.” This leads to more emergency room visits for these uninsured patients thus driving up health care costs for everyone else.

In other countries, it was far lower at “5.3 percent in Canada, 7.6 percent in Britain, 10.3 percent in German and 12 percent in France,” according to TheNew York Times.

No country has it perfect when it comes to health care. But overhauling our system into a completely free market approach is dangerous because if we’re wrong, people suffer and some will suffer grievously. Even experts can be wrong, but I find the argument by Nobel Laureate Paul Krugman, distinguished professor of economics at the City University of New York, and a columnist for The New York Times, compelling because he offers a simple, lucid explanation for his opposition to market forces as the primary approach to paying for health care. Krugman noted in The New York Times that, “All of this doesn’t necessarily mean that socialized medicine, or even single-payer, is the only way to go. There are a number of successful health care systems, at least as measured by pretty good care much cheaper than here, and they are quite different from each other. There are, however, no examples of successful health care based on the principles of the free market, for one simple reason: in health care, the free market just doesn’t work. And people who say that the market is the answer are flying in the face of both theory and overwhelming evidence.”