SEE SOMETHING, SAY SOMETHING: Protecting Our Most Vulnerable Children By Identifying The Signs Of Child Abuse 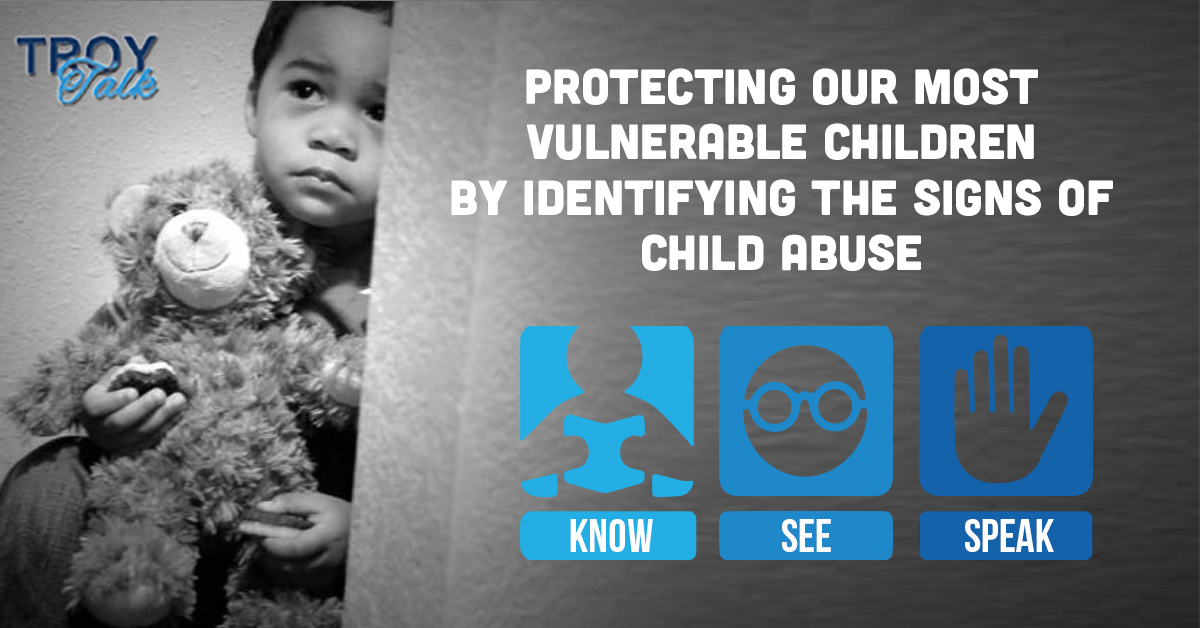 Every year in the United States, hundreds of thousands of children are victims of child abuse and neglect. One in four children experience child abuse or neglect at some point in his or her life.

April was designated Child Abuse Prevention Month by presidential proclamation in 1983. The observance raises awareness about child abuse, and speaks to prevention by educating individuals and communities about how they can help prevent the problem before it starts. We each play a part in promoting the social and emotional well-being of children and families in our communities.

Abuse and neglect against children — the most innocent in our society — seem almost unimaginable to us. Yet it happens, more often than we would like to acknowledge.

In fact, according to the Centers for Disease Control and Prevention (CDC), child abuse and neglect are significant public health problems here in the United States. The CDC states that more than 1,670 children died in the United States in 2015 from abuse and neglect. And according to child protective services, another 683,000 children were victims of child abuse or neglect nationwide that same year. As a father, this is heartbreaking and unfathomable.

Clearly, in spite of all the efforts to prevent child abuse, we still need to work on recognizing signs that it might be occurring. We have a checklist for identifying signs of physical illness in our children, but we also need to become familiar with signs of physical and emotional abuse in children, which include:

It is important to understand that if you observe one of these characteristics, it does not automatically point to child abuse. Many unrelated factors can be the cause of a child’s behavior. But signs that are numerous or persistent should raise some alarm.

But, what should you do if you suspect it? There is an understandable reluctance to report someone, especially if the evidence is circumstantial or not personally witnessed. The New Jersey Department of Children and Families addresses these questions directly.

Do callers have immunity from civil or criminal liability?

Any person who, in good faith, makes a report of child abuse or neglect or testifies in a child abuse hearing resulting from such a report is immune from any criminal or civil liability because of such action. Calls can be placed to the hotline anonymously.

Is it against the laws of New Jersey to fail to report suspected abuse/neglect?

Any person who knowingly fails to report suspected abuse or neglect according to the law or to comply with the provisions of the law is a disorderly person.

What happens after I make the call?

When a report indicates that a child may be at risk, an investigator from the Division of Child Protection and Permanency (formerly Youth and Family Services) will promptly investigate the allegations of child abuse and neglect within 24 hours of receipt of the report.

Additionally, it is helpful to know where to report any suspected child abuse. Here are two resources – one national and one in New Jersey – that can be used anonymously. I strongly urge you to visit the links I’ve provided below.

If you see or suspect child abuse, step up and accept the responsibility of reporting it. Child Welfare Information Gateway captures with perfect clarity what this reporting process means: “Reporting your concerns is not making an accusation; rather, it is a request for an investigation and assessment to determine if help is needed.”

Observing and reporting are actionable steps in preventing child abuse and neglect. It is one direct way we have to protect our children. That’s my take, what’s yours?