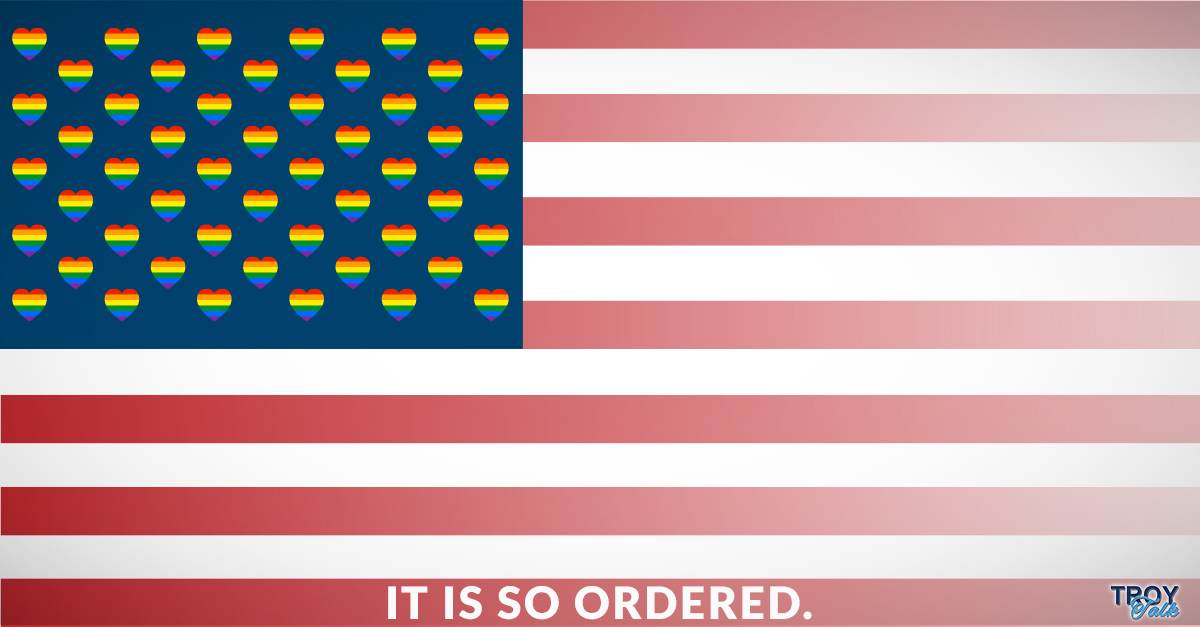 US) ruled that the U.S. Constitution provides a guarantee for the right of same-sex marriage. The 5-to-4 vote ends the decades-old battle to afford everyone the right to marry whomever they want regardless of gender.

I supported the Courts decision and issued the following statement after it was made public:

"This Supreme Court decision is a historic moment in our never-ending fight for civil rights and justice. I'm proud that the court extended nationwide the same protection for marriage equality that New Jersey has enjoyed for the past few years in their recognition that love is love."

The central and fundamental tenet that the SCOTUS ruling rests upon is unmistakably clear. The inalienable rights that our country was founded upon can no longer be denied to our fellow Americans based on their sexual orientation. The eloquence and intelligence of Justice Anthony Kennedy's majority opinion read like a manifesto of compassion and equality, wrapped in irrefutable legal reasoning. Its design appeals to the better angels of our character in such a way that reasonable people can understand it was the only possible legal outcome.

Some will argue that this ruling paves the way for the deterioration of the marriage institution.I would respectfully disagree with such a statement. My marriage has never been affected by the marriage of anyone else. That doesn't change with the SCOTUS ruling. In fact, as an American Christian, this ruling underscores the freedoms we have in this country and the beliefs of my faith to "love my neighbor as thyself." I would prefer to choose this compassionate road of love of one another rather than trying to adopt a moral authority that I am unqualified to render (as are you btw) and which is best left to our Creator on Judgment Day.

The issue of marriage equality is a deeply personal one for me. I recently had the distinct pleasure of attending a reception celebrating the nuptials of a male family friend and his new husband. Their commitment to each other is no less real than any other married couple and their right to legally bind their lives together shouldn’t be as well. I firmly believe that the sanctity of marriage is rooted in the shared notion of two individuals demonstrating a responsibility to each other. This level of love and fidelity is no more imbedded in one type of relationship over another. That is the crux of the historic legal argument decided by the SCOTUS.

Reading legal decisions can be tedious and sometimes difficult. However, Justice Kennedy’s final paragraph is beautiful English prose that embodies the legal and emotional basis for the SCOTUS’s decision. Here it is in entirety:

“No union is more profound than marriage, for it embod­ies the highest ideals of love, fidelity, devotion, sacrifice, and family. In forming a marital union, two people be­come something greater than once they were. As some of the petitioners in these cases demonstrate, marriage embodies a love that may endure even past death. It would misunderstand these men and women to say they disrespect the idea of marriage. Their plea is that they do respect it, respect it so deeply that they seek to find its fulfillment for themselves. Their hope is not to be con­demned to live in loneliness, excluded from one of civiliza­tion’s oldest institutions. They ask for equal dignity in the eyes of the law. The Constitution grants them that right. The judgment of the Court of Appeals for the Sixth Circuit is reversed.”

The intersection of religion and politics has often confounded our nation and its ability to chart its future course. This issue crystallizes that sentiment. That being said, the legal standing of same sex marriages in our country has been decided in such a way, that in my opinion, embodies the eternal American ideal of “life, liberty and the pursuit of happiness”

For that, I’ll raise my glass…Cheers! That’s my take. What’s yours?