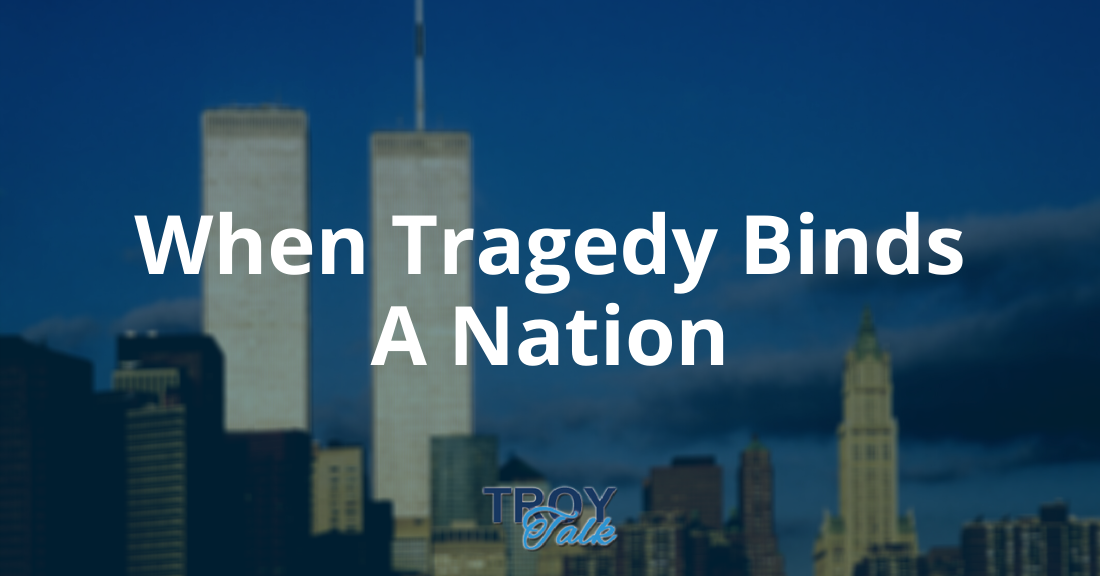 During this maelstrom of divisiveness, confusion, and a global pandemic, it is easy to forget what binds us together. And unfortunately or not, it often takes a tragedy or the commemoration of one to remind us.

The Greatest Generation of World War II had Pearl Harbor. We have 9/11. Those chilling images of planes crashing into the Twin Towers of the World Trade Center remain firmly etched in our minds, as do the reports of the aircrafts that crashed in Shanksville, Pennsylvania and into the Pentagon in Washington D.C.

It seems inescapable that when tragedy strikes, we find commonality. I can’t help but believe that most of us want the same thing: a future with hope, a daily life filled with promise and peace, and the ability to feel comfortable in our financial security. It seems the pursuit of those aims and how we achieve them are where the differences arise.

I have a friend who recently visited the Flight 93 National Memorial in Pennsylvania. It was so touching that it almost brought him to tears. The innocent passengers and crew, on their way to San Francisco International Airport, tried gallantly to recover control of the aircraft from four al-Qaida terrorists. Those passengers, who didn’t know each other, were shocked into action. They didn’t ask each other about their country of origin or what faith they practiced. Ethnicity and the color of their skin no longer mattered. What counted was banding together to try to thwart evil in its worst form.

The same is true of the Twin Towers and at the Pentagon. So many people sacrificed their lives and placed the well-being of fellow citizens ahead of their safety. Let’s not forget that in the wake of 9/11, millions bought American flags and donated blood. Enlistment in the military surged. The feeling of solidarity was palpable.

And yet a Gallup Poll conducted last year, just before the Fourth of July, registered that fewer than half (45%) of U.S. adults said they were “extremely” proud to be an American. This was lowest percentage since Gallup first asked this question in 2001, and is truly a sad state of affairs.

I believe what has changed is a shift in perspective. Are we focusing too much on our differences — often in the political vein — rather than on the values we actually share?

And one of those shared values is and always should be a commitment to the greater good, exemplified by our actions on and after 9/11.

We are in this together, and finding the commonality is what will bind us even stronger, I believe, than any temporary differences. The existence of the United States is the result of an ideal, however imperfect at times, that formed a great nation.

The victims of 9/11, however, they might have expressed it, gave their lives for that ideal.

No one is asking us to sacrifice our lives for this country. What we should ask of ourselves is how to find strength in our shared aim and not divisiveness in our differences.