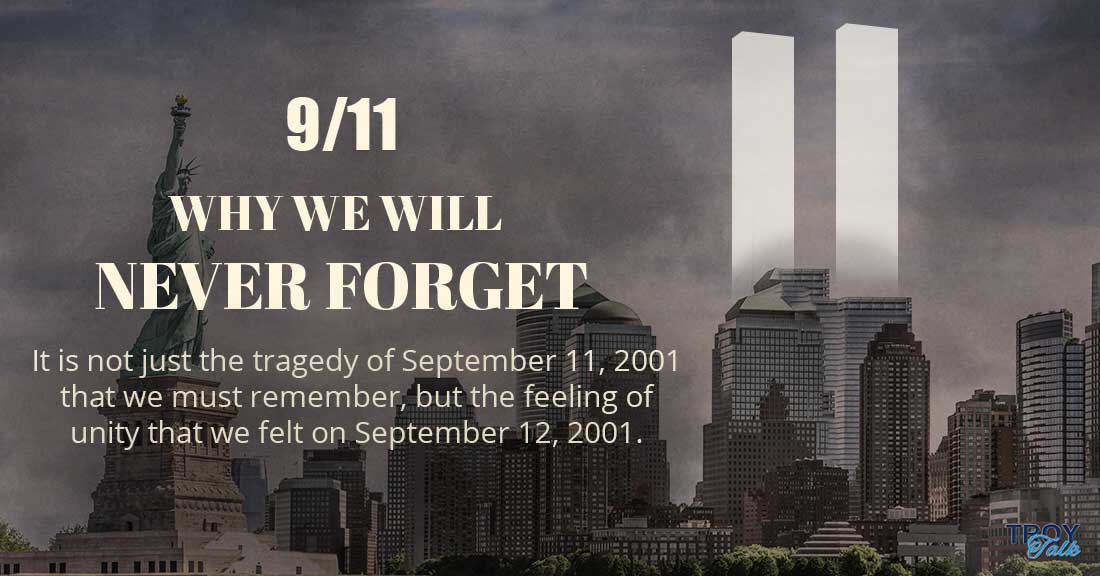 Yesterday, we celebrated the 18th anniversary of America’s September 11th tragedy. The event in 2001 touched and traumatized us deeply. It’s a moment that will forever be burned in the minds of those of us who were alive as these horrific events unfolded.

There is no unanimity on how we remember this day. What is unanimous is that we can never forget, and we offer our respect and remembrance as we see fit, whether it is at a public ceremony, a private thought, or a personal prayer for those we lost.

Surely our thoughts fall to the thousands of innocent victims, the first responders and others who tried to help. The ongoing tragedy, unfortunately, is that some, especially among first responders, continue to pay the price of poor health because of the toxins and carcinogens released in the air during those heroic efforts.

It is poignant to witness how our nation remembers.

In Denver, the  Colorado Memorial Stair Climb occurs. Since 2009, climbers participate in a climbing 110 flights of stairs to remember the same number of stories first responders had to climb.

The Travis Manion Foundation is the sponsor of 9/11 Heroes Run throughout the country. You can visit the website and type in your ZIP code to find the nearest run honoring our first responder heroes.

Or, New Jerseyans can visit https://wpst.com/september-11-memorial-services-planned-across-mercer-bucks-burlington-counties/ to see where and how we honor the victims and survivors of 9/11. Additionally, countless New Jersey towns have memorials to honor those residents we lost.

Our nation lost more than 3000 people in the attacks – more than 700 of which were from New Jersey. You can pay homage to them at the National September 11 Memorial and Museum in New York City (https://www.911memorial.org/).

I understand that how one remembers or honors individuals and events like 9/11 is a very personal decision. Whatever your faith and feelings regarding 9/11, I hope that you honored them yesterday and all the anniversaries in the future.

Sometimes when writing a blog about an event that is as emotional and significant as 9/11, the task seems overwhelming. And then I thought about the words offered by someone who understood the tragedy and the heroism that fateful day because of his role, and because the message he crafted continues to resonate with us all these years later.

President George W. Bush, speaking from the Oval Office, said: “This is a day when all Americans from every walk of life unite in our resolve for justice and peace….None of us will ever forget this day, yet we go forward to defend freedom and all that is good and just in our world.”

In the wake of 9/11, we stood united as one nation. The commonalities that bonded us during that time seem to be lost now and we need to strive to return to that common purpose as a nation. Therefore, it is not just the tragedy of September 11, 2001 that we must remember but the feeling of unity that we felt on September 12, 2001. The patriotism, unity, and civility we displayed afterwards is just as important as remembering the horror and devastation caused by the 9/11 attacks. It was a moment when nothing divided us because we were ALL Americans. So, as this year marking of this infamous day passes let us look to rekindle the sense of unity, purpose and selflessness that was exhibited by our brave fellow Americans who paid the ultimate price in their devotion to their fellow citizens.