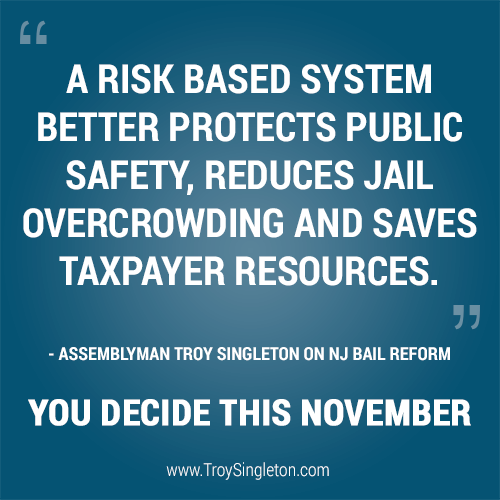 While this monumental legislation was working its way through the legislature recently, a number of concerns were raised about how these changes would impact poor, predominantly minority defendants.  Some have sought to play on the tenets of racism and classism in an attempt to make this a wedge issue amongst those charged with weighing its impact on New Jersey. At the end of the day, we were able to achieve what I believe is a crucial, healthy balance – a balance that blends public safety concerns with civil rights protections.

The changes we’ve approved take into account the concerns of law enforcement, judges, and prosecutors while striving to make sure the system improves public safety and protects our families. Additionally, we hope to create a fairer and more equitable system for those who have traditionally been neglected and underserved.

From a public safety angle, these changes will keep violent predators off the streets by giving judges the discretion to deny bail for those charged with committing the harshest of crimes, including those such as murder, human trafficking, crimes involving certain firearms charges or victims who are minors, or anyone a judge believes may pose a threat to others or the community. A system that is risk-based, rather than one based on a defendant’s wealth, better protects public safety and saves taxpayer resources.

Without these changes, a violent drug dealer or a repeat domestic violence offender could be back on the streets in no time, free to commit more crimes, simply because they had the money to post bail, despite having a well-regarded tendency to reoffend. We have all been shocked and left angry over the numerous instances of this circumstance that we have read about in our newspapers far too often.

With the historic reforms we just approved, those days will be over.  This is a win for our communities and the families who worry every day about the safety of their children and loved ones in their neighborhoods.

Equally important, the new changes will employ professional risk assessments to determine if burdensome bail requirements should be reduced for non-violent offenders, particularly those who are poor and would likely be resigned to awaiting trial in a jail cell because they do not have the means to procure bail.

It’s this same line of reasoning that has prompted U.S. Attorney General Eric Holder to support the “competent” use of risk assessments.

As Holder pointed out at the 2011 National Symposium on Pretrial Justice, “nearly two thirds of all inmates who crowd our county jails – at an annual cost of roughly nine billion taxpayer dollars – are defendants awaiting trial.”

It’s important to note that a large majority of these individuals are nonviolent, non-felony offenders, charged with petty crimes, an overwhelmingly disproportionate number of whom are poor and forced to remain in custody because of the simple fact that they cannot afford to post the bail required to return to their normal lives until their trial.

As Holder went on to note, “The reality is that it doesn’t have to be this way.   Almost all of these individuals could be released and supervised in their communities – and allowed to pursue or maintain employment, and participate in educational opportunities and their normal family lives – without risk of endangering their fellow citizens or fleeing from justice…But, within the confines of the current system, we too often find ourselves with few – if any – viable alternatives to incarceration.”

This has been one of the great moral dilemmas of our generation and one of the reasons that prompted the legislature to act on, and me to vote in favor of, these historic bail reform changes.

We knew we could not sit idle any longer and allow the current system to continue.

A fair and efficient criminal justice system is one of the cornerstones of our democracy, and with these steps we’ll be creating a better system for our state. But this alone is not enough. At the same time, we must work in earnest on our reentry policies. It is a moral and civic imperative that we provide a real impact on both ends of the spectrum: from pretrial justice, to the rehabilitation and reintegration of those who are released from custody.

I am proud of the step that New Jersey has taken in moving this issue forward. However, more work lies ahead. Let us all commit to that hard task of finishing the job and ensuring justice for all.