A Call To Action During National Autism Awareness Month 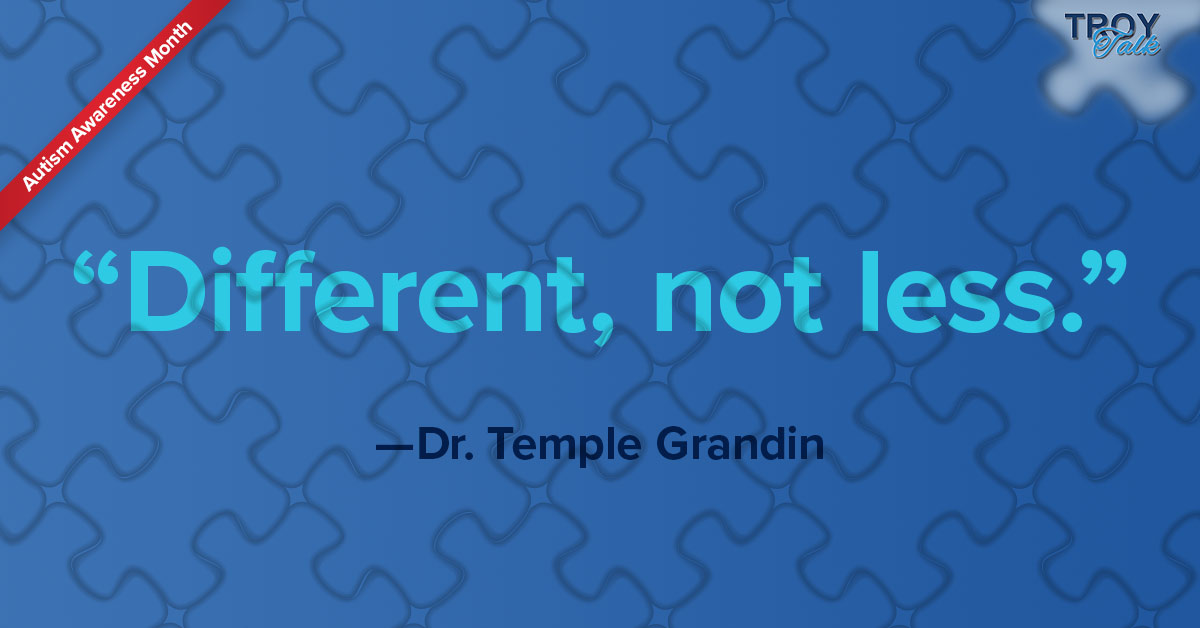 Seldom has a movement had a slogan that distills its message to a few words as the simple one coined by Dr. Temple Grandin: “Different, not less.”

Her pithy description captures the essence of autism and suggests how we should view someone who has it.

Dr. Grandin’s slogan isn’t the result of clever wordsmithing, though it works wonderfully. She understands autism at its core. Dr. Grandin is a professor at Colorado State University and a representative for the Autism Society. She has autism. Yet she has become the beacon that many look to for proof that even with autism, you can succeed in life and contribute to our society.

“Autism spectrum disorder (ASD) is a complex developmental disability; signs typically appear during early childhood and affect a person’s ability to communicate, and interact with others,” according to the Autism Society. “ASD is defined by a certain set of behaviors and is a ‘spectrum condition’ that affects individuals differently and to varying degrees. There is no known single cause of autism, but increased awareness and early diagnosis/intervention and access to appropriate services/supports lead to significantly improved outcomes.”

Added to the pain and cost of autism is the current trend that suggests the incidence of autism is rising to 1 in 68 births. In 2004, the rate was one in 124.

Autism touches all of us, especially the families whose child has been diagnosed with it. While no cure exists, it is treatable and the earlier that one recognizes the symptoms and has professional intervention, the more likelihood the child will have “significantly improved outcomes,” according to the Autism Society.

There is an element in most of us that we become unsettled when we encounter someone who is perceptively different, whether it is the way they look, the way they behave, maybe the way they speak. This is a good time to remember that just because someone is a bit different, doesn’t mean that we should ascribe negative qualities or treat them with scorn and criticism.

But what does it “feel” like to be autistic? Here is a glimpse from a self-described highly functioning autistic person: “I used to think I was insane. Growing up I knew I saw things differently, I found it hard to socialise and keep up with a conversation, and would often get "subject locked" and end up sticking with a theme that other people in the conversation had already moved way past. I didn't get most people’s humour, and conversely, found humour in things that other people just couldn't see. I have quite a quiet voice I'm told (though to me it feels like I'm talking too loud) and often give up on trying to talk because it's too easy to get talked over by more competent, or louder conversationalists.”

While many of us will pause with good intention this month to recognize Autism Awareness Month, we need to do more. We need to have a greater sense of urgency regarding this issue. We need to all become better and more forceful advocates who are committed to ensuring that those with autism are not only more widely accepted in society, but that they are getting critical help in the form of better social programs, education, safety and work opportunities.

Together we can turn Autism Awareness Month into Autism ACTION Month. “The world needs all kinds of minds,” as Dr. Grandin said in a 2010 T.E.D. Talk. I couldn’t agree more. That’s my take, what’s yours?