A Holiday Reflection: Living by the Golden Rule 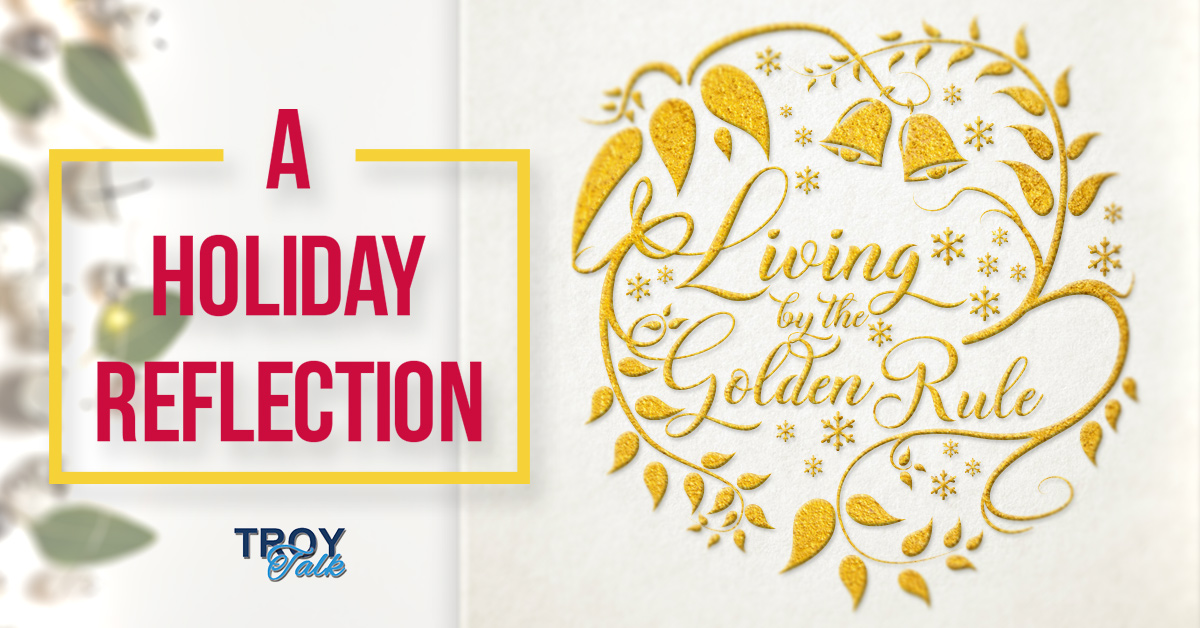 It’s the Holiday Season and amidst all of the preparations and celebrations, it is the perfect time to seek a few moments of much needed reflection, and hopefully achieve a greater sense of intimacy with family and friends.

I say Holiday Season because during December, religions that are not Christian have their own calendar for a time and approach to a special celebration that is meaningful to their faithful and yet might not coincide with ours.

I am not a theologian, but most religions seem to have a bridge to two characteristics with which we are all familiar. One is the golden rule — do unto other as you would have them do unto you. The other is that we should offer acts of kindness or mercy toward others. I do not believe that it is a stretch to suggest that all religions ask their followers to emulate these characteristics.

I have a friend who is a Christian. He addresses the issue this way, telling friends and acquaintances in his notes, cards and emails: “Merry Christmas and Happy New Year. If you do not celebrate Christmas, please accept my greetings in the spirit for which they are intended.” It’s his modest attempt at inclusion — sharing the joy — rather than exclusion.

With that in mind, may the blessings of this Holiday Season, from my family to yours, be filled with peace, love and joy.

It might be a coincidence that the holiday season coincides with Human Rights Month, celebrated every December since 1948. Indeed, the significance of this 70th anniversary cannot be overemphasized. After World War II, the United Nations General Assembly codified a set of principles that applied to every human being. Just as significant is that a diverse set of individuals representing an array of cultures, languages and beliefs drew up the rules for the declaration.

Article 1 of the Declaration states: “All human beings are born free and equal in dignity and rights. They are endowed with reason and conscience and should act toward one another in a spirit of brotherhood.” These words are simple and grand at the same time.

With this in mind and in the spirit of kindness and generosity which I have mentioned earlier, I’d like to offer a suggestion during this holiday season. One of the most divisive issues that seem to surround us is immigration and refugees.  Jesus, our centerpiece for the Christmas season, was a refugee. Most of us know or are familiar with the biblical reference. Jesus’ parents, Mary and Joseph, went to Bethlehem to be counted in the Roman census. Jesus’ family had to find refuge in a manger — an open structure for feeding animals — that served as the birthplace of the person who would become the central figure of Christianity. After his birth, the Holy Family had to flee to Egypt from a despot or face possible death.

Whether you accept the story of Christ or not, the basic lesson of common humanity should not be lost on anyone. Everyone should be treated with kindness, compassion and respect, especially those who are persecuted. And this delves directly into our raging debate about immigration and refugees. Open doors, closed borders, it has become so conflicted that common courtesy seems to disappear as we struggle for a middle ground that appears almost nonexistent. Let me remind everyone, and this is not a throwaway line for the sake of closing this debate, that there is an unarguable fact that we should consider. Everyone was an immigrant — willing and unwilling — except Native Americans, and many of those immigrants – women, men and children – were refugees escaping a perilous existence with a simple desire: a better life.

Where does this leave us? Is it too much to ask that during this Holiday Season we begin with a personal commitment to the Golden Rule and tilt toward just a little more kindness and consideration, especially when we make judgments about fellow human beings and the issues of immigration and refugees? It’s not an easy solution or the only one, but it’s a good way to start.