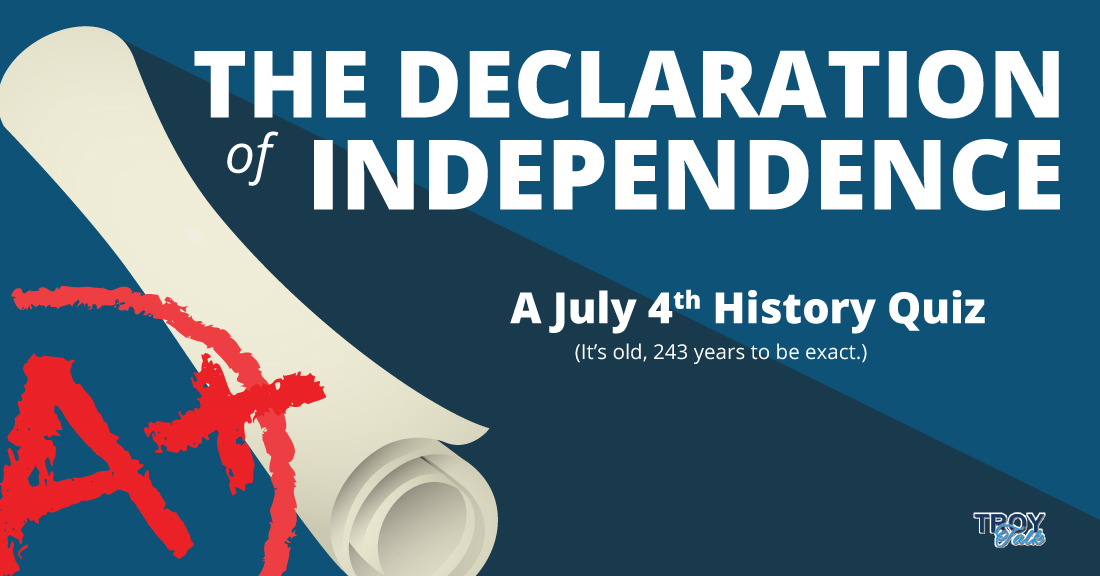 I’m talking about the Declaration of Independence. It would be difficult, indeed impossible, to imagine what this country would be like without this earth-shattering document.

It was the collective wisdom of Americans who articulated and then wrote down why the United States should break from Great Britain to form its own government. The idea of the declaration was imperfect in practice in 1776, certainly for women, African Americans and the landless. But it was a noble beginning that flourished over time, an idea that broadened as it adjusted to circumstances and experience, followed by enlightened legislators and legislation. Without it, there would be no United States of America. It was the rolling stone that set everything else in motion. (The United States didn’t ratify the Constitution until 1789.)

It also was an act of courage that supported the idea. It does not take much imagination to believe that had the American Revolution failed, the signers would have faced the hangman’s noose and had their properties confiscated.

Nor did its impact end from sea to shining sea. While direct linkage might be unproven, “More than half of the 193 countries now represented at the United Nations have a founding document that can be called a Declaration of Independence,” according to David Armitage, a professor of history at Harvard, writing in The Wall Street Journal. “Most of those countries came into being from the wreckage of empires or confederations, from Spanish America in the 1810s and 1820s to the Soviet Union and the former Yugoslavia in the 1990s. Their declarations of independence, like the American Declaration, informed the world that one people or state was now asserting—or reasserting, in many cases in the second half of the 20th century—its sovereignty and independence.”

Might this July 4 finally be the time to spend those few minutes to read the Declaration of Independence? It reminds us of the birth of our nation. Its impact ultimately led to the freedoms we enjoy and for which many yearn. If you so desire, please visit http://www.ushistory.org/declaration/document/  to read it. What I find rich about this beloved document is that when you read it, you’ll find some portion of it that resonates in a personal way.

Beyond reading the words of our independence, there are other ways to commemorate our freedom. Throughout South Jersey, our entire state and the rest of the United States, there will be parades and celebrations.

If your children are too young to read or understand the importance of the Declaration of Independence, New Jersey offers a solution. Turn July 4 (or any weekend this summer) into an exciting trip to a Revolutionary War site. Here are five in New Jersey:

Washington Crossing State Park in Titusville where General Washington and his men crossed the Delaware River, marking the turning point of the Revolutionary War. There is a Visitor’s Center Museum, which shows a short film about the crossing and contains war artifacts, and the Johnson Ferry House which has living history demonstrations and tours.

Old Barracks Museum in Trenton, which played a vital role in the American Revolution both as a hospital for injured soldiers and as a holding area for British prisoners of war. The Trenton Battle Monument and the NJ State House are also nearby.

Princeton Battlefield State Park in Princeton is where Washington and his troops defeated the British just days after victory in Trenton. There you can visit the Clarke House Museum which features Revolutionary War artifacts and activities and the Princeton Battle Monument, which was inspired by the Arc de Triomphe in Paris.

Monmouth Battlefield State Park in Manalapan is where the Battle of Monmouth took place. It is described as one of the most challenging fights in the American Revolution. Visitors can follow in the soldiers’ footsteps on walking trails that mark key moments in the battle.

Morristown National Historical Park in Morristown is where the Continental Army stayed for six months from December 1779 through June 1780. In addition to miles of hiking trails, there is the Ford Mansion, where Washington and Alexander Hamilton stayed; the Washington Headquarters Museum, and the Jockey Hollow Encampment Area.

Besides visiting these sites, if you’re a history buff or just curious about some interesting facts related to the Declaration of Independence that you might not know about, take a moment to read through this link: https://bit.ly/2u6m4xU.

So, whether it’s joining family and friends at a barbeque, watching a parade, heading to the shore, watching fireworks, taking some time to learn some more about the Declaration of Independence, or visiting a historic site, I hope you have a Happy 4th of July.