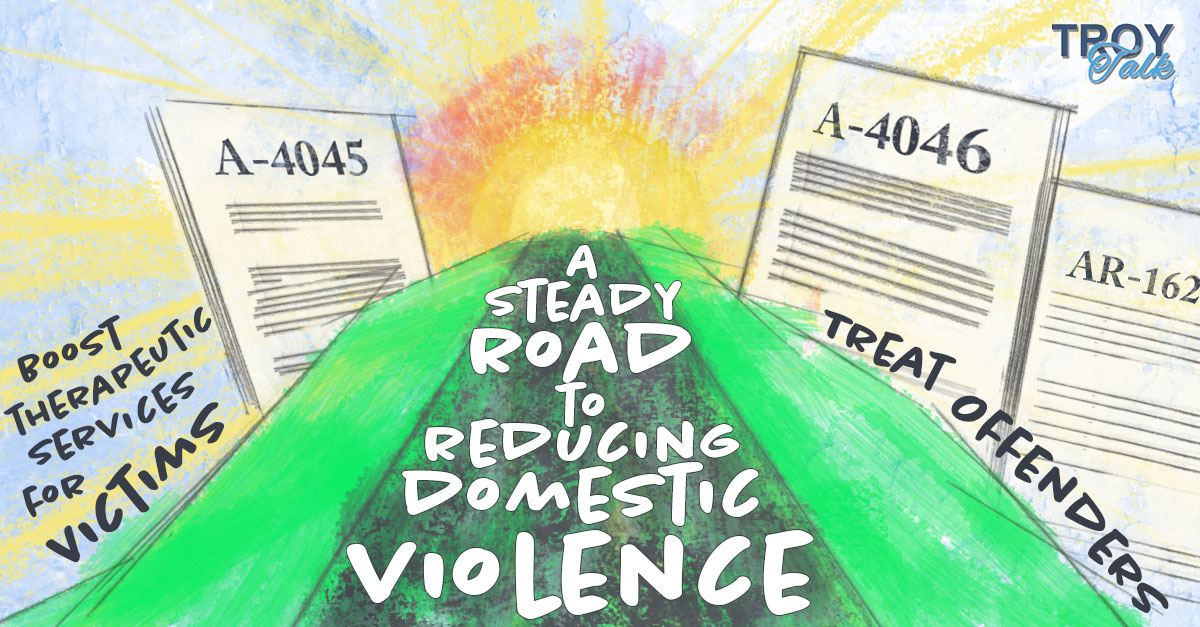 Domestic violence is one of the greatest threats to our families and is among the most difficult challenges for our legal system to address effectively. I had the privilege of serving last year on a New Jersey Supreme Court committee which looked closely at this issue from all facets. Our committee which included representatives from all three branches of government, the private sector, academia, advocacy groups and legal practitioners representing both victims and those charged with domestic violence recommended changes in an array of areas, including education, training, and resources for victims and adjudication and treatment of offenders.

We worked together in a bipartisan fashion to examine the entire system and, while areas are working, there is also a need to become better at processing these cases as effectively as possible while protecting victims of domestic violence. Thus, was born a package of proposals to get after this issue.

One of the areas that we were most sensitive to was the impact of domestic violence has on the children in those toxic relationships. The collateral damage inflicted on children of domestic violence can be devastating and long-lasting. Boosting therapeutic services for victims can help mitigate their emotional damage. This bill package represents a comprehensive effort to increase support services statewide and treat offenders in the hope of reducing domestic violence rates and vastly improve the lives of victims and their families.

The issue of dealing with domestic violence is highly complex because the issues often include children and jurisdictional consideration. However, I believe that these bills, if enacted, would have a significant impact on reducing domestic violence while offering victims the opportunity for a brighter future.

The proposals that we have introduced seek to bring clarity and produce more broadly based possible solutions across all jurisdictions. These initiatives will allow us to make demonstrative progress against this problem. Listed below are some of the most significant initiatives in the package.

The first proposal, A-4045, would establish and maintain a statewide, evidence-based program to provide grants to providers for developing and implementing treatment, counseling and supportive services to children and their families who have been exposed to domestic violence. This idea codifies effective treatment programs for victims and expands their impact throughout our state. Only 11 counties have done this, and we need every county in New Jersey to follow this course.

The second, A-4046, would require counseling for perpetrators whom the court orders for such treatment. However, we want this counseling to have firm guidelines to ensure its effectiveness. Specifically, the proposal would require:

The third, AR-162, would create a Technology Task Force within the court’s State Domestic Violence Task Force. This would address technical systemic issues that courts face when dealing with domestic violence issues.

The other initiatives in the package are as follows:

These varied efforts I have undertaken with my colleagues underscore my deep concern about this issue. The idea that any individual should be a victim of domestic abuse, sometimes repeatedly, is repugnant. And, I find it even more difficult when children are involved because perpetrators often use them as pawns to interfere with their lives and the spouse.

I’ve asked the question: What is best for the victims of domestic violence and how can we more thoroughly protect our children? If there were a magic formula or a single piece of legislation, I would support it. But given the realities and complexities of the issue, I believe that effects of these bills will have a measurable impact, reduce domestic violence, foster a growing knowledge of the issue and protect those who are in harm’s way, particularly children who are invariably the most vulnerable. That’s my take. What’s yours?