An Open Letter to My Fellow Americans 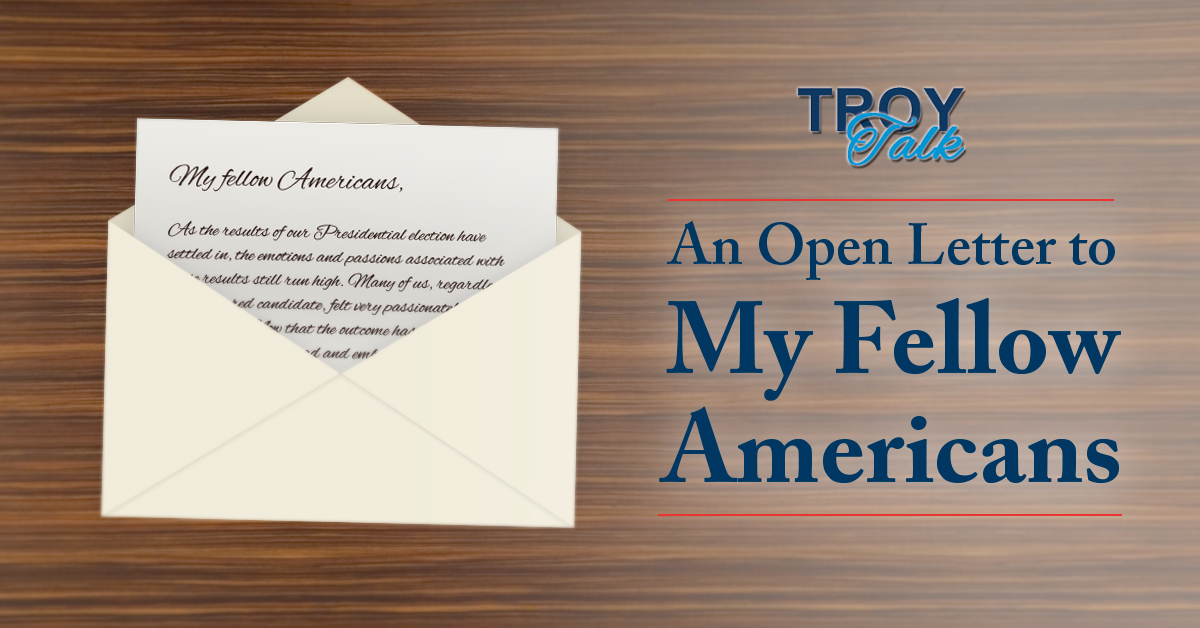 As the results of our Presidential election have settled in, the emotions and passions associated with those results still run high. Many of us, regardless of our preferred candidate, felt very passionately about this election. Now that the outcome has been decided, we must take the high road and embrace our fellow citizens as we attempt to move forward as a nation.

This election has turned a mirror onto who we are as Americans. While this image may be shocking or disturbing to some, it is what we have collectively allowed our republic to become. This is mostly due to political polarization, lethargy, and an almost apathetic disdain for government and those who run it. This last point is especially important. When we do not care enough to treat the holders of the elected positions in our representative democracy as conduits of our shared values, then we get representatives beholden to some and ignorant to the beliefs of many. Our democracy becomes less of a reflection of who we are, and more of a manifestation of our worst fears.

In order for us to grow as a country, we must all believe and embrace the notion that our democracy has to have room for divergent viewpoints in order for it to thrive. A country born out of rebellion and formed through agitation should not be afraid of passionate debate and differing opinions. So much of the anger and fear that prevents us from accepting other viewpoints, is born out of our inability to grasp that we can disagree with one another without those disagreements turning personal. This brand of politics has left an indelible mark on our nation and has scarred our political system significantly.

That said, we should never reward those who seek to stifle the voices of our fellow Americans because that betrays the ideals on which our country was founded. It is our duty to continue to raise those voices in loyal and reasoned opposition to an agenda that does not support the values that we believe in. Not only is that is our right, but it is also our responsibility as Americans to ensure that a government by the people and for the people are more than just mere words.

This responsibility cannot solely be exercised every four years, but must be actively cultivated every electoral season. We cannot allow candidates to be selected or elections decided because we have surrendered our vote and thus our voice by not being engaged in this process. So, starting now we have to begin to heal as a nation. All elections are about partisanship, but governing is about partnership and I begin by looking at myself and working in every way possible to find common ground amongst my fellow citizens on the challenges we face. I do this because I want my sons and daughter, and yours as well, to see that a nation deeply divided by a political choice can come together to repair our imperfect union.

My friends, I have the same prayer for our President-elect as I have had for every President since my first vote in 1992, “to govern in the interest of all Americans and to protect our nation”. I pledge my support to our President-elect to achieve this goal and hope with every fiber of my being that he will live up to that prayer. If he does, he will be successful and our nation will be as well. So let us no longer sow the seeds of derision and divisiveness in our country, but rather look forward to a harvest built on cooperation and unity, in an effort to make our country better.