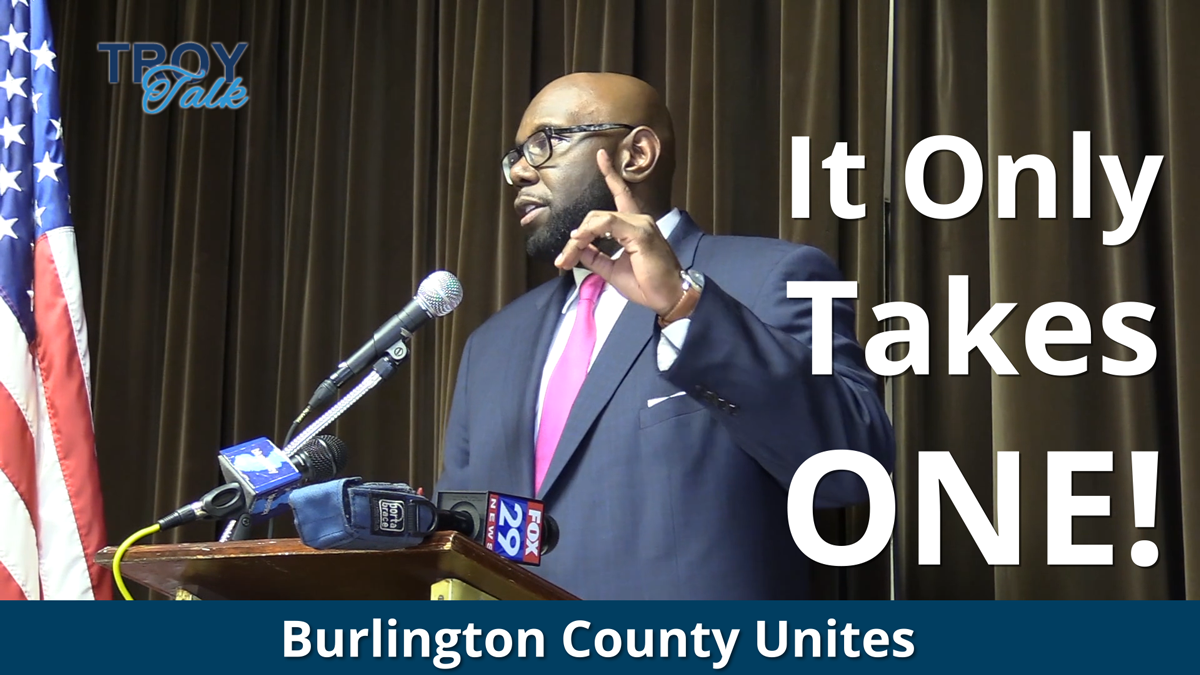 Recently, actions by the Klu Klux Klan in releasing racist and homophobic flyers, attacks on immigrants of Indian descent, the desecration of Jewish cemeteries and threats of violence at Jewish community centers were designed to sow the seeds of division and heighten fear in our communities. On Thursday, March 2nd at Our Lady of Perpetual Help Church in Maple Shade, NJ public officials, clergy leaders and concerned community members came together as one voice against intolerance, bigotry and discrimination. Our message of unity and inclusiveness permeated through the program. The following is the longer version of my remarks that were shortened on the night of the program.

First and foremost, I cannot stand in this holy sanctuary and not begin without giving honor and glory to my Lord and Savior, Jesus Christ. Oftentimes, public officials are shy to invoke their faith but my religious morals are the foundation upon which everything else I do is based. And, since I am surrounded by all of these outstanding faith leaders please forgive me if I sprinkle my remarks with a little bit of my Christian experience.

As I sat down to prepare my comments and as we reflect upon how these tumultuous times have gripped our nation, I was reminded of the story of David & Goliath from the First Book of Samuel. I recently had the opportunity of participating in a community meeting in my hometown of Willingboro where the keynote speaker likened this story to the challenges we face in our society today. I was moved by his remarks and inspired to craft a similar message for you this evening.

Now many, if not all of us, are familiar with this tale of the young future King of Israel, David, up against the Philistine giant, Goliath on the battlefield. The story tells us how David….in the face of the boasting and intimidating foe…choose to stand up for his people, many of whom he didn’t even know and face off against the Philistine. The young shepherd boy, who only arrived on the scene to bring rations to his soldier big brothers, was now thrust into a confrontation because of the indignant words of the Philistine. As the story continues, David hit the giant with one of the smooth rocks from his slingshot knocking him to the ground and finishing him with a death blow.

The story tells us a lot about our own lives and our own disposition when faced with life’s challenges. Oftentimes when faced with the fear of the challenge before us we really only have two options in life. We can fight or flee. In the story, the Israelites were frozen in fear and in silence before their tormentor, until David’s actions gave them strength.

However, my friends this story is not simply about the courage to face one’s fears, but to also lean on the understanding of something greater than we are to overcome what may seem like an unbeatable foe. We are at that very crossroads in our country and in our communities right now. We are faced with a country more polarized than at any time in my 43 years of life. A country questioning the very institutions of our democracy and the stewards of those vestiges.

David realized, as we must realize, that we are never in the battle alone but sometimes it just takes one of us to stand up first. ONE man….ONE man’s strength was able to embolden an army…ONE man’s courage was able to summon the resolve of a nation to fight back…ONE man’s refusal to be silent against what he saw changed the face of history. Just as it took ONE woman to refuse to give up her seat on a bus….ONE woman to say that I should have the same rights as my male counterparts….My brothers and sisters….I submit to you that it only takes ONE!

My brothers and sisters our moment is upon us. Throughout our nation’s history at these pivotal moments’ men and women just like you and I wondered, “what would I do if I were there?” I submit to you that whatever you are doing right now is what you would have done. And, if you are sitting silently while the fundamental tenets of who we are as Americans is being threatened, then your silence and complicity is a danger to our democracy.

My brothers and sisters as we sit at this prayer service, and if you declare yourself a child of God, Allah, Jehovah, Yahweh or even agnostic to any faith whatsoever…realize this…if we stand as one, our communities will be stronger ….our nation will be stronger…and we as a people will be STRONGER TOGETHER!