Community Benefit Agreements: Where Everyone Wins 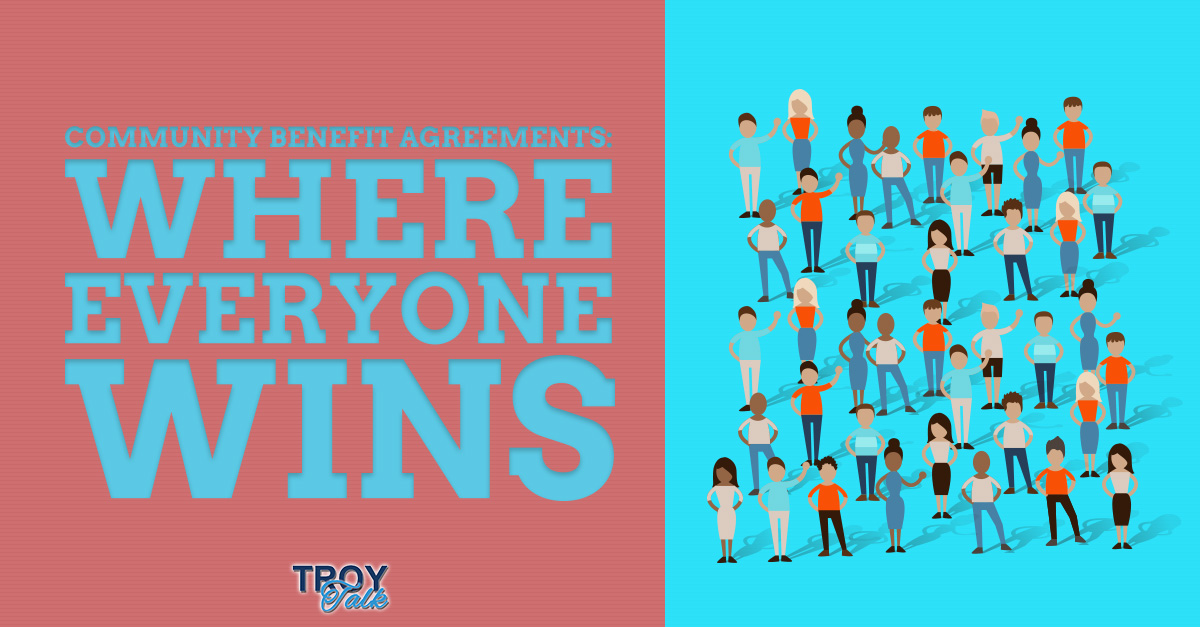 Besides being a state representative, I am also active in the world of construction. As a union carpenter and public official, I am keenly aware as to how the intersection of development and community enrichment can benefit our society as a whole. This leads me to my thought this week on enhancing a proven tool that marries those two concepts: community benefit agreements. On the surface, these agreements are fairly simple. A developer is seeking certain concessions on a project (usually a tax break or some type of public subsidy) and agrees to provide benefits to the community. Those benefits come in various forms depending on the community but most fall along the lines of living wage standards, quality of life improvements and/or local hiring goals.

A key focus of mine as it relates to development is to ensure that these projects not only bring good well-paying jobs, but also potentially reshape communities in a positive manner. Currently, I am working on a proposal that seeks to accomplish this goal by allowing local government entities to create community benefit agreements related to projects that occur in their jurisdictions. This proposal, if enacted, would afford town leaders the option of having greater leverage in shaping the development in their communities.

Community Benefit Agreements (CBAs) are the economic equivalent to the idea that “no man is an island unto himself”. What a developer hopes for is a successful project that will eventually turn into an economically profitable venture. That is an expected and reasonable business goal. What a community hopes for, through its elected leadership, is a successful project that turns into an asset for its residents. It really is as uncomplicated as that.

I believe that every smart developer would, in the long run, understand that they could expect a far more harmonious working relationship with a project and a community if they start a dialog with local leaders well before considering a new venture.

If business people believe that this approach has the trappings of anti-business sentiments, they are mistaken. Rarely would local communities reject a business investment out of hand. Indeed, I am pro-business when it benefits everyone: the builder, the community and its residents and as I have said before, without business there is no labor. But just as you have the right (and should, in fact do so) ask hard questions about buying a home, a new car, or choosing a college, so too should community leaders, who know and understand the culture of their neighborhoods better than anyone, have a say in what comes into theirs. This proposal seeks to ensure that the existing laws related to project development are sensitive to community needs, without being discriminatory or prejudicial.

After reaching a reasonable and fair plan that benefits both parties, and then it’s time to adhere to the agreement, both in the spirit and to the letter of the CBA. Communities should not be left dangling when a developer makes significant promises, then fails to deliver. According to one news report that demonstrates this cavalier attitude, Marathon Oil got a $175 million tax break from Detroit.  In order to gain the subsidy, Marathon agreed to a nonbinding agreement to hire Detroiters. They did. In eight years, they hired eight employees. This is NOT the type of agreement that demonstrates the spirit of mutual trust and respect in a community benefit agreement.

While CBAs pose a positive initiative for most communities, there appears to be a creeping sentiment from some legislative bodies to outright ban their usage. The first stab at this appears to be in Michigan, where an American Legislative Exchange Council (ALEC) backed proposal is currently stalled for the moment in the legislative process.  “If approved, Michigan’s law could take us back to the days when development deals were brokered in backrooms and pubic money was handed out with little more than a wink and a nod,” according to Amy B. Dean, a fellow at the Century Foundation.

Dean correctly assesses that CBAs, a relatively new approach for urban development, are really a matter of transparency, saying in practice, “Let’s always operate in an atmosphere of openness.” I agree. In order to reduce the cynicism that many of us feel towards government, citizens must be truly included in the mechanics of government. This includes having a real belief that development decisions are made on the merits with an eye towards benefitting the community as a whole.

Community benefit agreements have been shown to work in other jurisdictions around the country. From New York City to Los Angeles, to New Haven, CT, and to Denver, projects are under way with solid CBAs that are working models for others to emulate. We should take notice.  The cliché “win-win” is popular today. But that refrain can become a reality when developers and local leaders work together in a spirit of fairness and transparency. That’s my take, what’s yours?