Earning Power: A Way To Eradicating Poverty In New Jersey 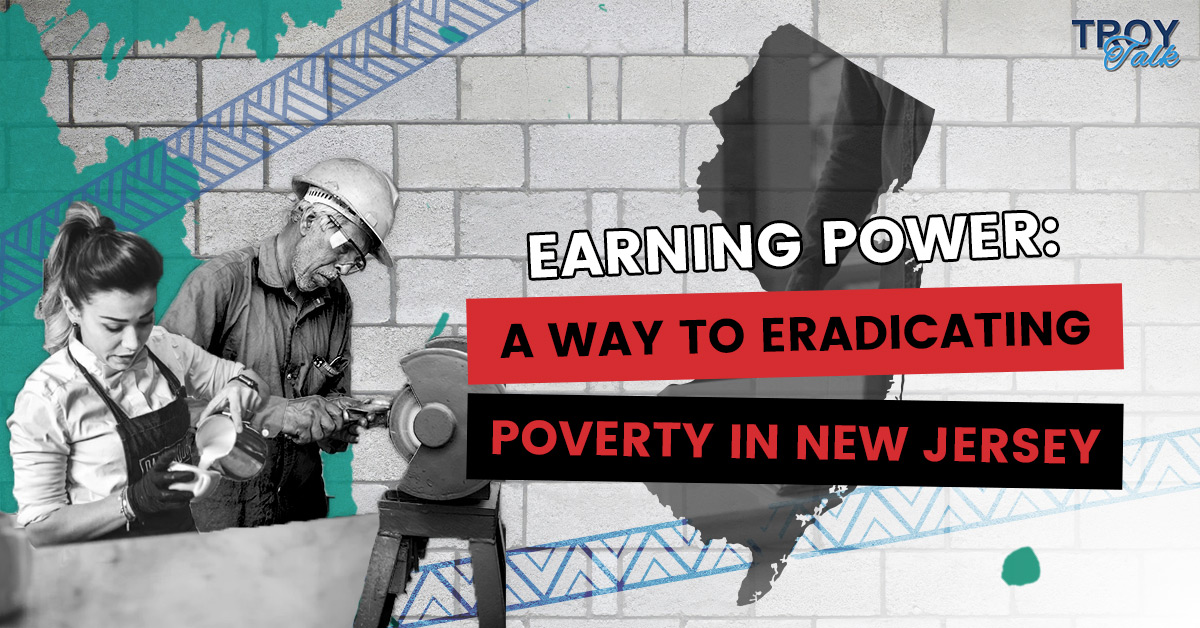 Let’s talk about a subject that leaves some people uncomfortable: Poverty.

The poverty line is the estimate of the minimum level of income needed for basic life necessities. According to the U.S. Census Bureau’s report, 40.6 million people in the country lived under the poverty line in 2016, a third of them children.

While it was the second year in a row of a decrease in the poverty rate, that number is still too high. January is National Poverty in America Awareness Month, so it’s time to think of what you can do to ensure that the poverty rate continues to decline.

We often hear about programs, incentives, motivational pitches and academic analysis that have merit in helping eradicate poverty. Some make sense, some don’t. I’d like to add a simple, tested idea to the discussion, which has grounding in common sense: Let’s focus on earning power that gives people a lift past the poverty line.

A good job is the key to a strategy of cutting poverty, and a job that doesn’t increase one’s earning power is simply a half measure towards moving this strategy from concept to concrete. The earning power I’m referring to is an increase in New Jersey’s minimum wage to $15-per-hour. That figure isn’t a panacea, but it can push one further away from the poverty barrier with an annual salary of approximately $31,395. Additionally, beyond just increasing the wages of thousands of low-wage workers it will create demand in our state’s economy for goods and services as these workers spend their wages at local businesses.

One of the biggest arguments against an increase in the minimum wage is the claim that a $15-per-hour wage is a threat to business, especially small ones. The argument that it will result in lost jobs and working hours has been debated by economists and reporters all across the political spectrum. Barry Ritholtz, a columnist for Bloomberg, points to a well-known study that claimed raising the minimum wage would result in these dire circumstance. “The authors behind an earlier study predicting a negative impact have all but recanted their initial conclusions,” writes Ritholtz. Using Seattle as a test case (they raised the minimum rate to $15 in a series of steps), the authors predicted a death spiral for food service and drinking establishments. It didn’t happen. Instead, business grew in both sectors.

I don’t wear rose-colored glasses when discussing the issue of moving the minimum wage toward $15-per-hour. On that salary, no one is going to take a vacation at a posh resort. What $15 does provide is allowing workers to raise their head above water for themselves and their family, earning in a sense a financial respite as they plan for a better future.

However, what we also need to realize is that simply focusing on increasing the minimum wage is not enough. We have to maximize the opportunity for workers to earn more than a minimum wage. This entails better workforce training that focuses on the skills needed for the jobs of tomorrow and a better education system that ignores which zip code a child is from. Combined, workforce training and education will allow our next generation to break the cycle of poverty that grips so many communities.

So, how do we increase the minimum wage in a manner that bolsters workers’ economic conditions, grows our economy, and elevates New Jersey’s business community? I believe that tying any increase in our state’s minimum wage to the statewide median wage could be one such way to achieve this. It will move the needle on wages both gradually and fairly, while producing an immediate stimulus to the economy.

The existing federal minimum wage is $7.25 per hour (The government changed it to this figure in 2008). It’s a number that keeps you below the poverty line. Try living on $15,080 annually. No matter how frugal or fiscally conscientious one is, you’ll never get ahead. One way to increase wages sensibly is to use the median index as the standard rather than averaging. Using the median is a basic statistical approach that is logical and effective. The median is the midpoint between two numbers. For example, the median between 0 and 100 is 50. It’s as simple as that. Using an “average” number can be misleading. If 100 people in a room earn $100 per day except for Joe who earns $1,000 per day, then the average isn’t 100 but $109 per day. Indexing wages to the median wage also offers protection against inflation, which hurts the working poor more than most.

Our New Jersey workers need a fair, adjustable standard that can ultimately move them up the economic ladder and out of poverty. Linking the minimum wage to the median income offers a practical approach to achieving this goal.