From Battlefields to Boardrooms 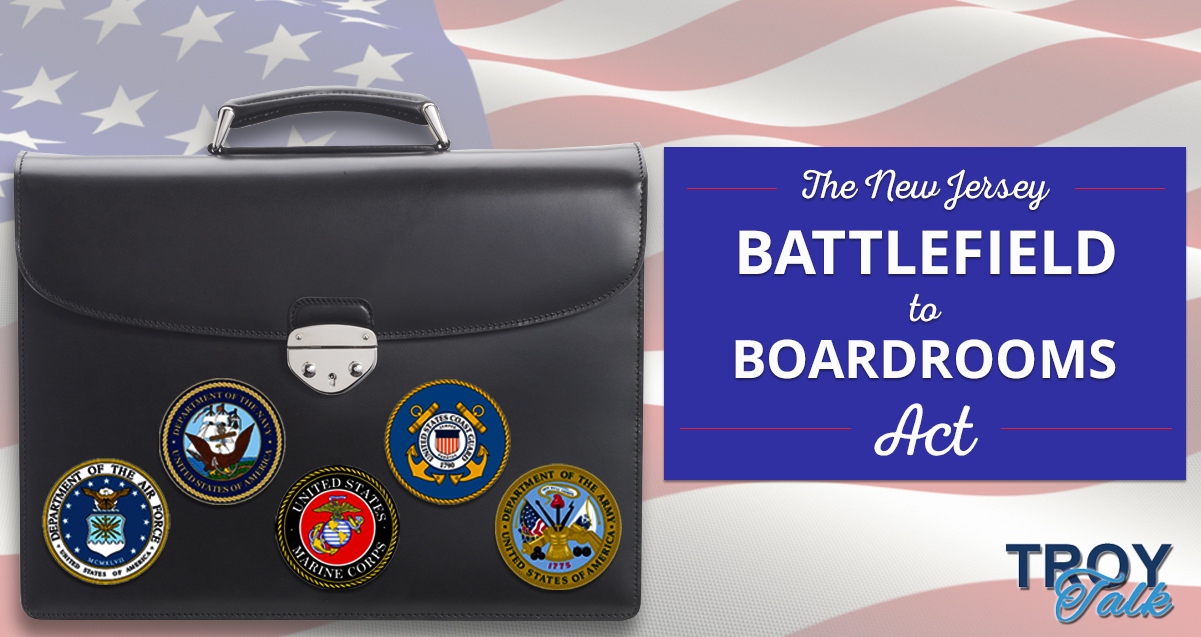 Being unemployed can be difficult for anyone, but it is particularly painful for one special group: our military veterans.

There is a saying that comes with those who have given of themselves to defend our country, “Some gave all, but all gave something.” This statement underscores the covenant that thousands of men and women have made with our country. An agreement that demands that we honor their service by treating them every day with the dignity and respect that these patriots deserve.

It’s also about providing our veterans with the care and support they need in battle as well as when they return home. Unfortunately, for those who recently fulfilled their military commitment, rather than experiencing a smooth transition to civilian life, they have returned to a difficult employment climate with limited opportunities, and if they’re New Jersey residents, it’s been especially daunting.

The New Jersey unemployment rate among veterans was 7.9 percent in 2014, the second-worst rate in the nation, according to the U.S. Bureau of Labor. The national average was 5.3 percent. If the percentage is bothersome enough, keep in mind that 16,000 unemployed veterans are in New Jersey. That’s an enormous number of personal stories and difficult circumstances. Thankfully, this number is slowly decreasing but more needs to be done.

“It is disheartening that New Jersey’s veterans bear a disproportionate share of the burden of the state’s limping economic recovery,” writes Gordon MacInnes in New Jersey Policy Perspective. “While special efforts to help veterans find jobs should be bolstered, if New Jersey’s entire economy was truly recovering, the situation would be greatly improved for the state’s veterans. But it’s not, and policymakers need to chart a new course in order to help change that.”

There is merit in this observation. I believe we should offer not just optimistic words but concerted action to help unemployed veterans and the businesses that should consider hiring them. For that reason, I’ve introduced The New Jersey Battlefield to Boardrooms Act. Its purpose is to strategically utilize our tax code to incentive businesses to hire veterans.

Everyone knows that there is a tipping point when making a business decision; sometimes, it’s one factor that pushes you toward or away from a certain action.

From a commercial perspective, the tax credit is good for businesses that need that extra motivation to hire someone with potential, especially if it’s a vet.

There might be a tendency on the part of some businesses, especially smaller ones, to believe that their size is too modest to make a difference. That’s not the case.

In a recent interview, Justin Constantine (www.justinconstantine.com), a retired Marine officer who survived after being shot in the head by a sniper in Iraq and now is an expert on veteran employment issues, said: “A lot of small businesses want to hire veterans, and maybe they feel like they can only afford to hire one or two; that’s nothing compared to Lockheed Martin, so why should I? It’s the ones and twos that make a difference… Even if you want to have the capacity to hire one veteran, it is one veteran at a time. It’s just like all politics; it’s local, and so is our transition. I encourage that, if someone’s inclined to hire a veteran, it’s not a lot of hard work to figure out the right way to do it. There are a lot of good resources out there. I strongly encourage you to take the time, because once you hire one, that veteran is going to have a network, also, and can bring other new veterans.”

I believe that Col. Constantine is correct. Don’t think you can’t help even if your hiring needs are slight. It’s the thought and the follow through that matter most. A good starting point is www.state.nj.us/nj/community/veteran/.

And don’t forget what you can expect from veterans.  In the military, they learned a great deal about teamwork, diligence, decision making, understanding the chain of command and the willingness to shift direction on short notice when needed. Sounds like a top-notch employment candidate to me! That’s my take, what’s yours?