Hunger Is Not A Game 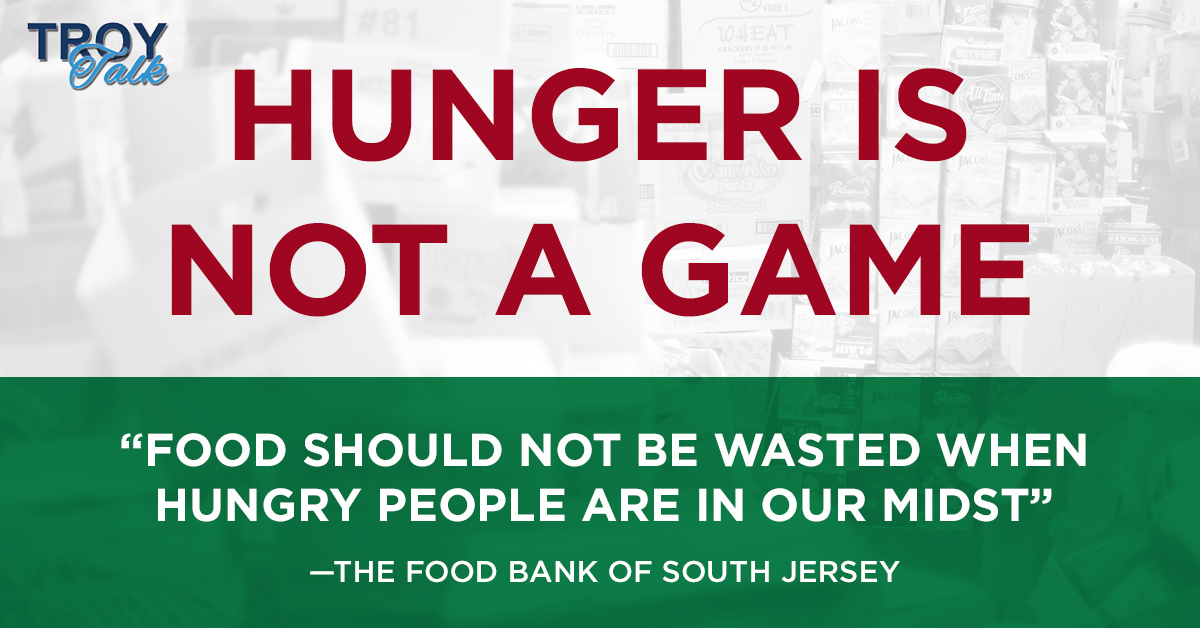 Yesterday, July 4th, was hopefully a day of fun and relaxation for most New Jersey residents. I also hope that you took a moment to reflect on the greatness of our country, even as we work through the challenges we face nationally. Many of us may have had a chance to hover over the grill, enjoy a picnic feast, nibble on cookies and lemonade and have the pleasure to reach out for that extra hot dog we didn’t need to eat.

However, we shouldn’t take for granted any of those meals. We’re the fortunate ones, but during the summer there are those among us who don’t always have the security that they’ll have a meal which is nutritious and satisfying. I’m referring too many of our children in South Jersey.

It’s been well chronicled that children who rely on school meals struggle to get enough to eat during the summer months. More than 13 million children in the United States live in "food insecure" homes. That phrase means that those families don't regularly have enough food to eat. More simply stated, five out of six kids who rely on free or reduced-price school meals aren’t getting free meals in the summer. Millions of kids rely on school for regular meals, however, in the summer, those meals are gone. As a society, we should be committed to the moral notion that all children should be able to focus on being kids, not their empty stomachs.

Hunger knows no season, and it doesn't take a summer vacation. No child in our country, the most prosperous nation in the world, should spend the summer months struggling against the pangs of hunger. Scientific evidence clearly shows us that nutrition deficiencies can have long-term and long-lasting implications that affect a child’s life and ability to succeed. And, these nutritional needs aren't governed by vacation days.

In New Jersey, the picture would even be bleaker if it wasn’t for an organization that steps up to fill this void: The Food Bank of South Jersey. It is the largest distributor of food services in South Jersey, serving four counties, Camden, Burlington, Gloucester and Salem.

The Food Bank of South Jersey (FBSJ) offers hope with this basic commitment: “Food should not be wasted when hungry people are in our midst,” according to FBSJ. “From this truth, we have built an effective food distribution program that annually links nearly 12 million pounds of food with more than 150 charitable food providers, such as food pantries, community kitchens, and shelters.” And they hit the mark during the summer with their Summer Meals program, offering children meals that include breakfast, lunch, and snacks.  A member of the Feeding America network of national food banks, the Food Bank of South Jersey works alongside four other food banks in the state to develop immediate and effective solutions to eliminate hunger and food insecurity in our designated service areas.

Many fine South Jersey businesses and individuals have stepped up to support this program. But more help and support are always needed. This is the United States of America. We just concluded one of our greatest holidays. We flew our flags high with pride. We praised our worthy veterans and those still serving for protecting our way of life and preserving our independence. We celebrated the ideals this country represents. Let’s NOT diminish our achievements by ignoring the children around us who need nutritional meals and suffer from food insecurity. No child should ever go to bed hungry.