July 4th: Independence Day for ALL 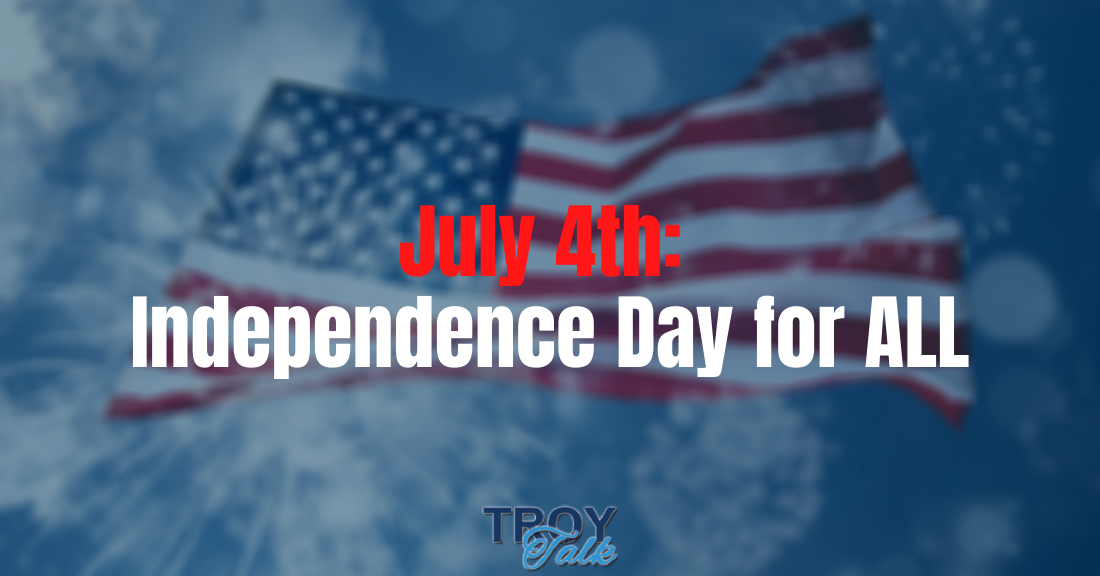 Unless you’ve been hiding under a rock, you know that the intrusion of the Coronavirus and the Black Lives Matter movement have been among the most prominent news events this year.

While the coronavirus’ impact is evident to everyone, the Black Lives Matter cause and the basis for its support might be less clear.

The Black Lives Matter movement, founded in 2013, works to raise public consciousness about the unequal treatment the African American community endures, most prominently in its relationship with the police, but also in the greater context of our society. Given the recent killings of African Americans at the hands of various police departments, attention paid to the movement has gained in intensity. It is a social, nonviolent disobedience movement that protests against police brutality.

The movement grounds their right to protest under the basic idea of freedom or independence afforded all citizens of the United States.

I believe this attention to the movement is particularly relevant because in two days, we celebrate July 4, or Independence Day. It commemorates the signing of the Declaration of Independence. And unless you’ve forgotten your history lesson, you know that it followed the United States’ public affirmation of its dissolution from Great Britain because of intolerable grievances. In its wake, that document continues to serve as the framework for freedom and independence for the U.S. and other nations, too.

The Black Lives Matters movement has gathered a groundswell of support that is unmistakable. You only need to watch the news coverage that shows people of many ages, colors and economic classes supporting the need for fair treatment, dignity and respect. Rather similar to our Declaration of Independence.

Most view the right or the independence to demonstrate as a fundamental expression for all citizens. The sticky point arises when the viewpoint or philosophy of a group or movement disagrees with our own beliefs.

During a recent coronavirus briefing, Vice President Mike Pence was asked how to reconcile the advice of medical professionals to wear safety masks, against the practice of not enforcing these suggestions at certain political rallies. (There is unanimity among the medical profession that wearing safety masks helps to stop the spread of the coronavirus.) The vice president answered by invoking the right of independence — to explain or justify — why some people disregard the advice to wear safety masks despite evidence to the contrary.

Some Americans may feel uncomfortable with the Black Lives Matters protests, wondering what gives participants the right to demonstrate. The answer is eloquently expressed in the Declaration of Independence and enshrined in our Constitution. Let me emphasize that I speak of peaceful, nonviolent protest, advocated by Black Lives Matter, invoking the historical precedence of Dr. Martin Luther King and Mahatma Gandhi.

This Independence Day is different. We have unprecedented medical challenges of the coronavirus pandemic and a disrupted workforce that is reeling. We will overcome these challenges.

And then we have the Black Lives Matters movement, a growing nonviolent crusade supported by many that is willing to embrace everyone. This movement’s demand isn’t complicated. It’s about seeking equal
treatment, under the law, for all, irrespective of who you are, where you come from, the color of your skin or the nature of your religion if you espouse one.

Black Lives Matter!!! How American of them. That’s my take, what’s yours?