Lest We Forget: Protecting the Children Left Behind 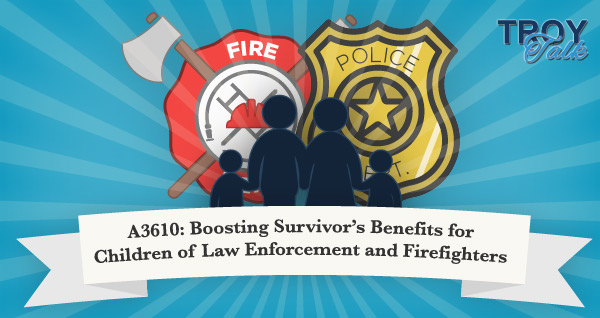 Gone but never forgotten. It’s a phrase that we hear frequently, but I wonder if it doesn’t strike a different emotional chord with children who have lost a parent, particularly if that mother or father served in the area of public safety and died in the line of duty.

For that reason, I am sponsoring a bipartisan proposal (along with my colleagues, Assemblymen Herb Conaway Jr., M.D., Adam Taliaferro, Assembly Majority Leader Lou Greenwald, Senate President Steve Sweeney and Senator Diane Allen) to boost survivor’s benefits for children of law enforcement and firefighters who die in the line of duty.

There is a practical and compassionate need for this change. Currently, if a member of the State Police Retirement System (SPRS) or the Police and Firemen’s Retirement System (PFRS) dies in the performance of duty, the surviving spouse receives a pension of 70 percent of the officer’s final compensation or adjusted final compensation for the use of the spouse and children of the deceased. However, this proposal would increase the percent of final (or adjusted) compensation from 20 percent to 70 percent for a surviving child (or children in equal shares) if there is no surviving spouse or if that spouse dies. This offers greater economic protection for a child who must face the horrific consequences of having no parents.

While the current provisions meant well regarding the definition of children, in today’s environment, I find our extended cutoff age, given its connection to education, a more realistic and practical approach.

If children should suffer a double tragedy and both parents die before they reach maturity, they should not have to carry a financial burden in addition to the heartbreak they have undergone. We cannot protect them forever, but we can offer a more genuine safeguard with compensation in the event of this type of personal disaster. It will at least ease the economic issues that invariably arise.

As I write this, we have just celebrated Memorial Day, when the entire nation offered its thoughts and prayers for all the warriors of all the wars, who gave their lives so that we could live in a free, democratic society. And, while this holiday is a solemn occasion, we also celebrate that patriots like the men and women who died in defense of our country once walked among us. It’s fitting that we, too, remember our public servants who died in the line of duty safeguarding our communities. They all aptly fit a favorite verse of mine from the Bible: “Greater love hath no man than this, that a man lay down his life for his friends.” - John 15:13

And, as we remember them we can honor their ultimate sacrifice by living as they did, with a selfless commitment to their neighbors, both known and unknown, and not forgetting those they have left behind. That’s my take, what’s yours?