Despite enjoying record sales worth over $3 billion during the state’s last fiscal year, officials from the New Jersey Lottery confirmed during a legislative hearing yesterday that the windfall didn’t translate into a boost in funding for state social programs that by law must benefit from the agency’s proceeds.

Instead, lottery officials and outside vendor Northstar New Jersey blamed a decline in the popularity of multistate jackpot games like Powerball and Mega Millions that carry a higher profit margin, forcing the state to ramp up sales of other, less-profitable games to try to keep pace.

The explanation was offered up by the officials amid growing concern about a controversial long-term sales and marketing contract with Northstar that Gov. Chris Christie’s administration approved two years ago – a deal that was supposed to enhance lottery system proceeds for the state budget.

Lawmakers stopped short yesterday of saying the contract should be halted. But they questioned whether the state will ever be able to get good value on its 15-year deal.

And they also said the lottery’s challenges renew broader concerns they have about the state’s ability to monitor big contracts with outside vendors. Comprehensive reform legislation is already in the works to beef up oversight of privatization efforts.

“No one is watching what’s going on,” said Chairman Robert Gordon (D-Bergen) while speaking to reporters after the lengthy Senate Legislative Oversight Committee hearing in Trenton.

But they also cautioned that the portion of the proceeds that by law must go to state social programs benefitting seniors, veterans, college students and others was falling behind original budget projections.

Lawmakers scheduled hearings to find the cause of the shortfall. 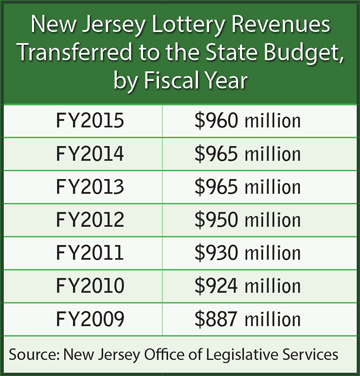 During the first hearing yesterday, Carole Hedinger, the executive director of the lottery system, cited final audited figures that indicated a total of $960 million went into the state budget for social programs during the last fiscal year. That marked a drop from the prior fiscal year, when the lottery produced $965 million for the budget.

Though not as low as the $930 million that officials once feared, the figure for the 2015 fiscal year was boosted by nearly $20 million in penalties and credits paid by Northstar New Jersey for not meeting revenue goals. The total also fell short of the more than $1 billion that was initially budgeted by the state, marking the second straight year that contractual revenue targets were missed.

But Hedinger, during her testimony, offered full-throated praise of Northstar. She said the company has invested in new technology, improved the payment system, and added more than 800 new retail locations to the lottery system’s network, helping to stanch the bleeding caused initially by Sandy and then by a significant decline in participation in the multistate jackpot games.

“There is one crucial reason for our success in combatting a debilitating nationwide trend and staving off the losses that impacted other states,” Hedinger said. “A successful partnership with Northstar.”

“I don’t mean to suggest for a moment that either the lottery or its partner, Northstar, believe flat revenues are where we want to be,” she said. “But achieving flat revenues, in the face of incredibly challenging national trends that no one foresaw when our agreement with Northstar was executed, is an accomplishment nonetheless.”

She went on to say that the Northstar’s modernization efforts and investments simply need time to “bear fruit.”

But Senate Budget Committee Chairman Paul Sarlo (D-Bergen) said he’s concerned about expenses tied to the 15-year Northstar deal. The contract allows the company to collect fees and reimbursements from the state, payments that could ultimately outstrip any of the gains the lottery system will see from the modernization of marketing and sales, he said.

He also asked Hedinger to further explain how sales could continue to rise without translating into increased funding for state social programs, which by law must equal at least 30 percent of proceeds.

“It has to do with the mix of games,” she said in response. “Some games are more profitable than others. We make the highest profit from draw games, we make a lesser profit from instant games.”

In prior years, the lottery had been able to net more revenue for the budget and beat the 30 percent floor because the more profitable games were soaring in popularity.

“It’s that mix of games that determines the bottom line,” she said. “So ticket sales can go up, while revenues will also go up, but maybe not at the same levels, depending on that mix of games.”

The committee, meanwhile, also took testimony from witnesses who oppose the Northstar contract.

Seth Hahn, legislative and political director for Communications Workers of America-New Jersey, cited political contributions and lobbying records that showed GTECH, a partner in the venture that makes up Northstar, used firms with close ties to Christie for lobbying and public affairs in the run-up to the contract award.

The deal with Northstar, which provided the Christie administration with a $120 million upfront payment, was agreed to as the Republican governor was struggling at the time to close a sizable budget shortfall without raising taxes on the eve of his 2013 bid for reelection. The Northstar deal also came as part of an aggressive privatization agenda that Christie had pursued in the wake of a 2010 report issued by his administration that said the state could save more than $200 million by privatizing services provided in-house by numerous state departments.

“This is everything that people think is wrong with the political process in New Jersey and it’s hard to fault them for thinking that,” Hahn said.

Hahn also said instead of shortfalls the lottery system would be enjoying revenue growth, based on the trends from the 2007 to 2012 fiscal years, had the 64 workers from his union who lost their jobs to the Northstar takeover been kept on.

Later on during the hearing, Rutgers University professor Janice Fine outlined a recent study highlighting problems the state has had in recent years with oversight of private vendors, including those running New Jersey’s halfway houses and administering housing programs in the wake of Superstorm Sandy.

“I’ve been working on this subject for over a year,” Gordon said. “It’s hopefully a bill that will see some action soon.”