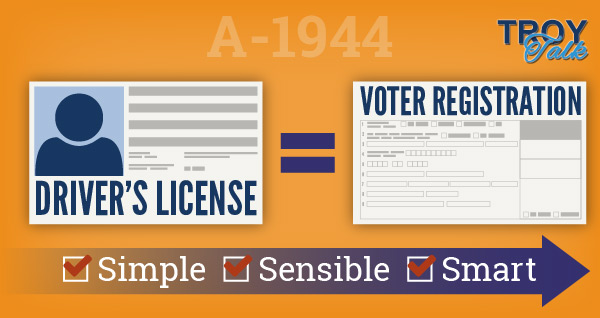 Simple, sensible and smart. Those are three words that describe a proposal introduced by my colleagues: Assemblymen Craig Coughlin, Gary Schaer, Tim Eustace and Assemblywoman Joann Downey that recently saw legislative action. And, in my opinion are the ingredients for a fair and broad-based approach to voter registration.

The legislation, A-1944, would register individuals to vote when obtaining or renewing their driver’s license. This doesn’t mean you have to vote, that’s a personal decision, but it will remove any possible question about your access to voting.

In recent years, there have been far too many political battles about the registration process for potential or past voters. Rather than promote greater access to the ballot box, some have sought to disenfranchise segments of the electorate for nothing more than political advantage. This, coupled with the unfortunate reality that far too few citizens bother to vote in an election, has led to a polarizing political system that is not functioning in a manner to move our country forward.

The legislation resembles a recently enacted Oregon law that was the first in the United States to launch an Automatic Voter Registration or AVR program. The program has been met with terrific success. Since its launch this year, “51,558 Oregonians have been added to the voter rolls through AVR,” according to the Center for American Progress. This bill broadly embraces the benefits of voter registration and dismisses the hurdles that some would raise, in an effort to tinker with the registration process.

This law is a major step to removing the question of who has the right to vote and who is eligible. We do not have an official national identity card, but we do have a de facto one: a person’s driver’s license. Now when you get or renew your license, the voting registration process occurs by default and requires no extra effort on the part of the person obtaining a driver’s license. (If the person applying for a license is under 18, he or she is added to the voting rolls when they turn 18.)

When asked why they don’t vote, the most common answer is that they’re not registered.

Several parts to this legislation should be particularly appealing to all.

First, it increases participatory democracy painlessly. Democracy works best when access to its levers is open to everybody and engagement in the process is free from arbitrary barriers. If one believes in democracy and the greater good derived from broader participation, my legislation is on target.

Second, automatic registration also addresses a major reason people do not vote. The “I’m not registered” becomes irrelevant for most people. My bill virtually removes that justification.

Third, the 1993 National Voter Registration Act (often described as the Motor Voter Act) has been a force to help people register as voters when conducting a transaction with a state motor vehicle bureau. But this approach has been “hampered by lackluster compliance and implementation.” This bill removes that inconsistency during a time where voter participation has been terrible. (Voter turnout for the 2014 midterm election was the lowest since World War II.)

Fourth, we have finally allowed technology to enter the voting registration process in a transparent and effective manner. What makes this approach particularly appealing is that it is so simple to administer and removes human error. Responsibility will fall to the local or state level, and it will not require an increase in staff. They will do what they’ve always done, registering people who are seeking a new driver’s license or renewing an old one, and the registration is done automatically, thanks to technology.

If I seem to be particularly enthused about this legislation, your inference is correct. I love the idea that a simple process, one in which a majority of adults already participate without any problems, can transform many people’s potential participation in a democracy (witness the number of new voters in the Oregon example). This legislation is truly one where democracy wins, and our government has the potential to be better for it. I applaud my colleagues for moving this proposal forward and offer my support. That’s my take, what’s yours?