National Suicide Prevention Month: A Dark Cloud for Our Police 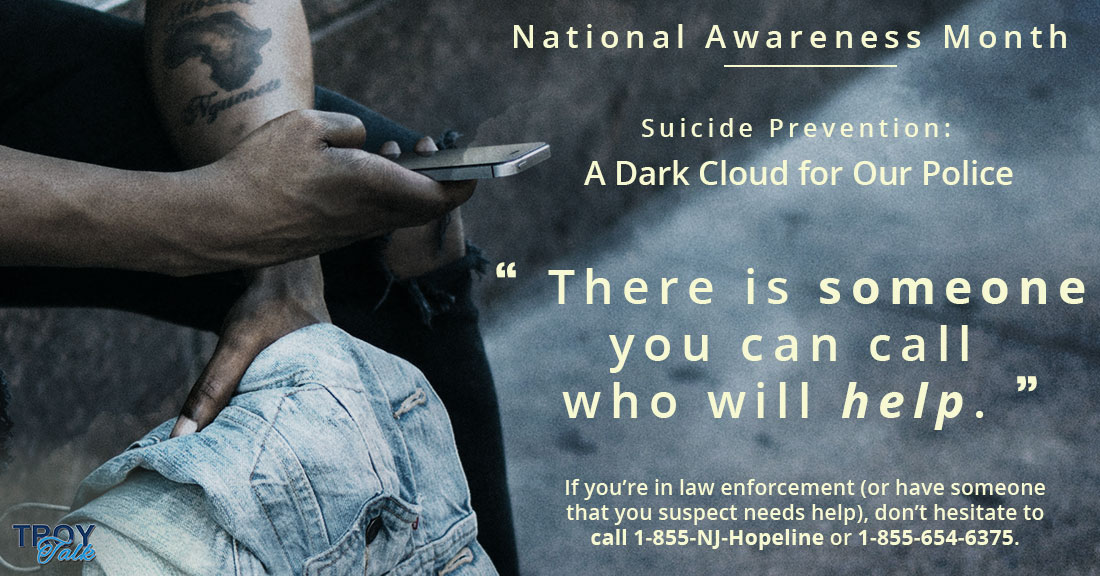 September is National Suicide Prevention Month, and the goal is to promote prevention awareness for everyone who faces difficulties and begins to have darker thoughts about how to deal with the situation. There is someone you can call who will help.

While remaining on the topic of suicide prevention, I’d like to focus on a special group in New Jersey: men and women involved in law enforcement.

New Jersey has launched the nation’s first-ever stress resiliency program for law enforcement. If you’re in law enforcement (or have someone that you suspect needs help), don’t hesitate to call 1-855-NJ-Hopeline or 1-855-654-6375.

The directive from the Attorney General’s office will require “all state, county, and municipal law enforcement agencies designate a Resiliency Program Officer (RPO) who will be specifically trained in – and ultimately train their department in – resiliency. The new RPO, Robert Czepiel, the Chief of the Prosecutors Supervision and Training Bureau in the Division of Criminal Justice, is the state’s first-ever Chief Resiliency Officer, who will be responsible for overseeing the statewide program.

“We owe it to them to not only combat the stigma associated with seeking help but also to give them the tools they need to deal with the stress and trauma they endure. We hope that this first-in-the-nation program will serve as the first line of communication, allowing officers to unburden job stresses and provide them with the support they deserve. We can no longer allow them to suffer in silence.”

In a recent white paper, the Ruderman Family Foundation, a philanthropic organization, revealed the shocking truth about law enforcement suicide. More of its members are likely to die from suicides than in the line of duty.

Below are the numbers in New Jersey, but the statistics belie an even greater tragedy. Those numbers probably do not reflect the true — and higher — number of law enforcement suicides because that type of deaths has been “historically underreported,” according to the Attorney General.

The new program will not replace existing programs that help law enforcement deal with the stress of the job. It will not, for example, “replace Employee Assistance Programs or the very successful ‘Cop2Co’” program that already provide a support and referral structure for officers in need or crisis. Instead, it is designed to work in tandem with these programs by widening the net to cover all law enforcement officers, not just those in crisis or need.”

This new directive has received the support of law enforcement. “I would like to thank Attorney General Grewal for working hard to put this residency program together with the help of our law enforcement groups,” said Robert W. Fox, president of the New Jersey State Fraternal Order of Police. “This program is long overdue to protect our officers that protect citizens every day.”

The men and women in law enforcement are in harm’s way on a daily basis. The stress and potential mental and physical problems that are associated with law enforcement are often overwhelming. All of us should support this approach to assisting our police forces, and even to those who have retired. They have earned it, and it adds a layer of protection and a solution that did not previously exist. Sometimes it’s the wounds we cannot see that hurt us the most.
That's my take, what’s yours?