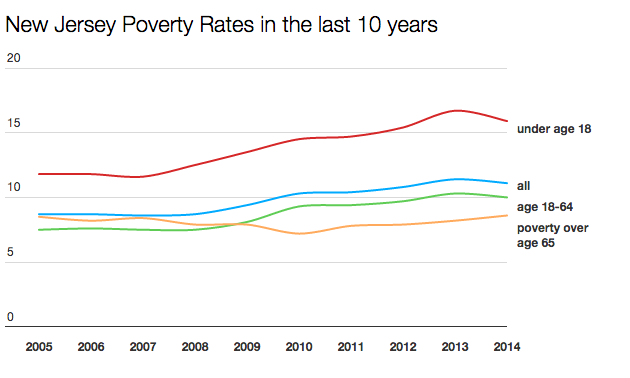 Still, experts say they are relieved that the poverty rate did not go up in 2014, as it had in previous years.

Melville D. Miller, president of Legal Services of New Jersey, called the .3 percent drop between 2013 and 2014 "not statistically significant," but said it does signal a leveling-off that is good news, despite the fact that the poverty rates in New Jersey are still at record highs.

"If the poverty rate is going up among this population, they're not getting the help and services they need," he said.

Not all counties have seen their poverty rate go up over the last 10 years, though no counties that have recovered from the recession to their 2005 poverty levels, the data shows.

"It's the latest in a long line of things that show how slow and painful the recovery has been for people living and working in New Jersey," said Jon Whiten, president of New Jersey Policy Perspective.

Whiten said that New Jersey, one of the wealthiest states in the nation, has been in a "pseudo-recovery" for years, where it just hasn't kept pace with the recovery in the rest of the country.

A decade ago, Hudson County had the highest poverty rate in the state at 16.5 percent. It now ranks third, behind Cumberland and Passaic counties. Somerset, Hunterdon and Morris had the lowest poverty rates in both 2005 and 2014. 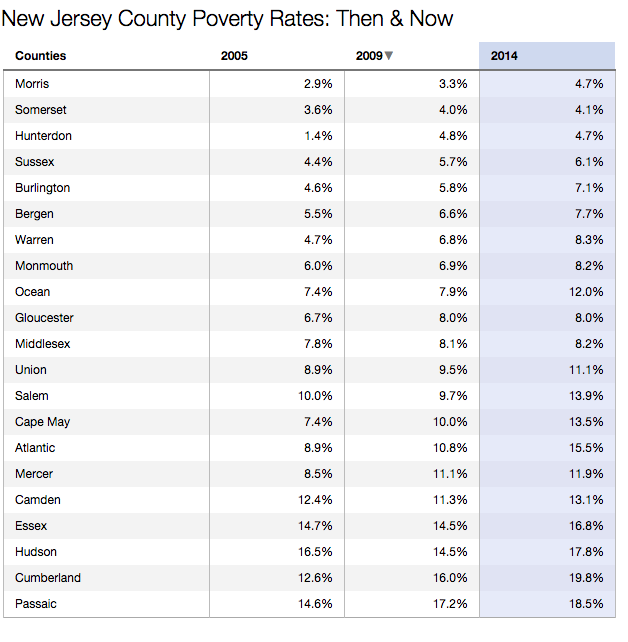