Pay-to-Play in Politics: The Power of Transparency 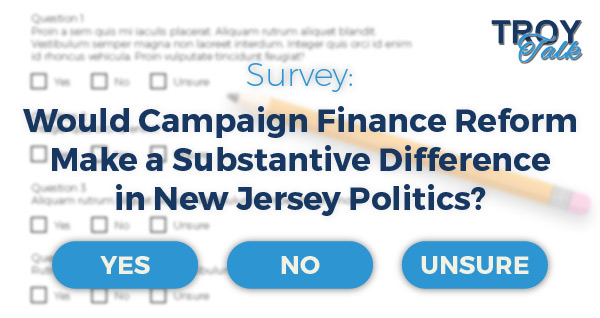 After the long presidential primary run, and those who anticipate the impending coverage of the presidential race can rest assured that the media will bring up one topic repeatedly: Campaign Finance.

The costs of campaigns and, more specifically, who is funding campaigns matter, especially when there is a veil of secrecy around donations. For that reason, I have introduced two proposals that would revamp and improve campaign finance and pay-to-play laws in New Jersey. My goal strikes at the core of what is often missing in campaign financing: greater transparency and broadening disclosure requirements.

In particular, I’m hoping to counteract the effects of the U.S. Supreme Court's Citizens United decision, which essentially allowed corporations and super PACS to pour unlimited amounts of money secretively into campaigns, essentially diminishing the voice of the average citizen. This has become an impediment to the democratic process. By requiring independent expenditure committees to report where their money is coming from and what they're spending it on, we can pull back the veil of secrecy that Citizens United effectively cloaked over the election process.

I’m not suggesting that people cannot financially support the candidate or campaign of their choice. However, I think it’s the fair, transparent and most democratic action we can take to know who is making the contribution.

My second proposal (A-3903) deals with the idea of “pay-to-play”. The concept of pay-to-play works this way. Some contributors believe that if they contributed to a politician’s campaign, especially if it is a significant contribution, it will give them an inside track — favorable treatment — when seeking a potential government contract.

New Jersey has been grappling with the effects of this for decades. Over the years, we've made some strides to remove the influence of campaign donations from the awarding of government contracts, but we need to go a step further if we want actually to root out this influence and protect taxpayer dollars. Creating uniformity across every level of government and requiring more contracts to be subject to pay-to-play prohibitions will help us achieve that goal.

My proposal would create a transparent and level playing field among all entities in the state. This includes the executive branch, state authorities, the legislative branch, counties and municipalities, as well as local elective boards of education and fire districts.

This proposal would bar businesses seeking to enter into or holding a public contract from making a contribution to various types of political action committees. And, the proposal would also eliminate provisions of existing law that exclude contracts awarded under a "fair and open process" from pay-to-play regulations and exclude only contracts of $17,500 (or less) from the pay-to-play proscriptions.

The central question is why is this so important to you, the voter. Would these changes make a substantive difference in how we conduct politics?

I believe it would. Ann M. Ravel, who served as chair of the Federal Election Commission for 2015, offers these trenchant comments, “In the first part of the 2016 election campaign cycle, just 158 families, along with companies they own or control, contributed nearly half of all the money that was raised to support the presidential candidates. Meanwhile, a huge number of people around the country are so disillusioned with government that they don’t even vote, let alone contribute to political causes.”

Can you imagine 158 families making decisions on a national level for over 322,000,000 American citizens? The average citizen might believe that no matter how they vote at the national level, the trickle-down effect is minimal or nonexistent.

I maintain that transparency matters greatly for the simple reason that it seems real. You recognize the people and players in your backyard. And if they are going to try and influence an election, you have the right to know that they contributed and how much they spent. This will allow you, the voter, to decide if there is a cause for questions when you enter the voting booth. And because I’ve always believed that when you shine the light on questionable actions, some individuals pull back, and others realize that they have to play by the rules. That’s my take, what’s yours?