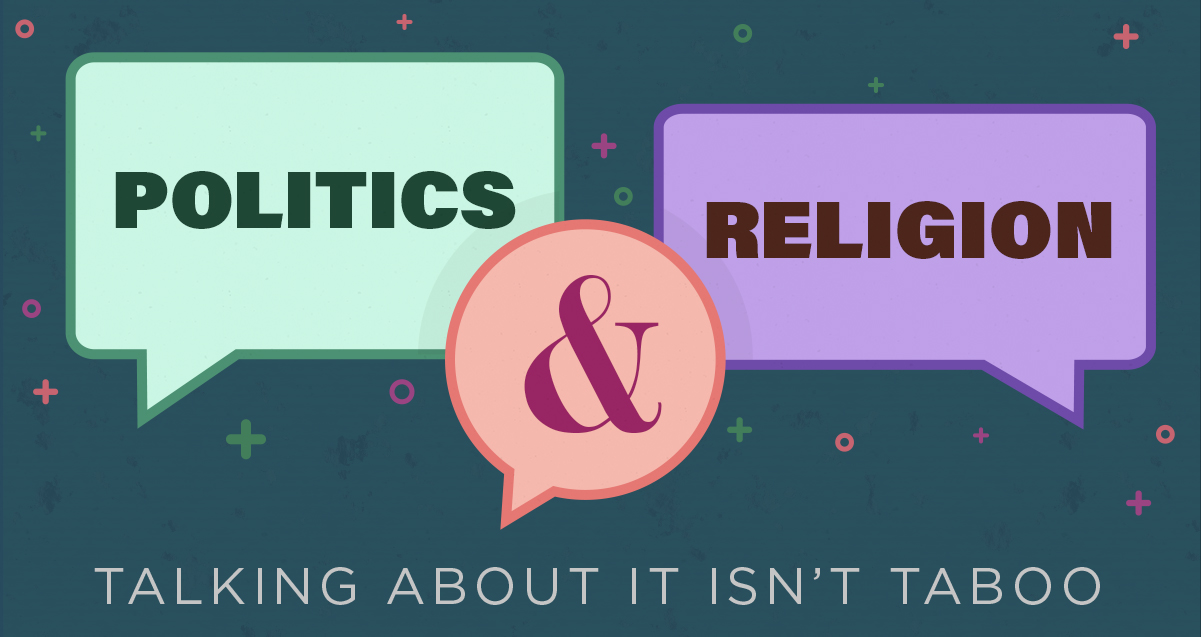 We know the popular advice. Don’t talk about politics and religion during a dinner party because to do so would only result in a social misstep or something worse. Many consider it a volatile social cocktail.

That is precisely why we shouldn’t be afraid to mix the two in any discussion. And by refraining from a discussion, in a fair-minded and reasonable manner, we only confirm a misguided taboo.

Each individual journey that results in the formation of one’s personal moral code and conduct emanates from a source, indeed, often by multiple influences. For some, it’s their parents, teachers or possibly a mentor or an influential friend. For many, the binding glue is their faith and its impact not only on who and what they are but how they conduct their lives. Politicians and other civic leaders magnify this impact because their decisions affect society and the political process.

Those who maintain that there is no place in politics for religion offer what even they must know is a specious argument by not acknowledging our country’s history and current reality.

Throughout our past, organized religion and people of faith have contributed to a betterment of society. A simple example and the one most often cited is the obvious: Most of our founding fathers were people of faith. Can anyone forget the bold and brave leadership of the African American clergy in the civil rights movement? There was the great social activist Dorothy Day, a vocal proponent of women’s right and the poor (despite facing criticism from her own Catholic church).

Then, what causes this disconnect that religion either doesn’t or shouldn’t matter in politics?

At least one researcher on this subject, Lauren Okum with the Center for American Progress, speculates that some churches have banded together in an exclusionary fashion to distance themselves from those who disagree on what she describes as cultural issues that include abortion and same sex marriage.

She maintains that the more inclusive a religious organization becomes, the more appeal it gains across the greater population, using Pope Francis as a recent example.

She writes: “Pope Francis attracted attention and admiration from Americans on both sides of the political spectrum. The pope’s transformative faith is a welcome sea change to followers from myriad religious traditions, as well as those with no religious belief. Pope Francis cherishes the role of faith in people’s lives—and also knows how it can be wielded in the public sphere. In his historical address to Congress, the pontiff said, ‘It is important that today, as in the past, the voice of faith continue to be heard, for it is a voice of fraternity and love, which tries to bring out the best in each person and in each society.’”

I am convinced that we can have a fruitful conversation about religion and politics when we do it in a civil and respectful way. Indeed, the conduct of the conversation, one that often seems to turn abrasive and exclusionary, bolsters some of the misgivings that people have about this topic.

I can’t think of a more compelling example than the recent death of U.S. Supreme Court Justice Antonin Scalia regarding the nature of how we should conduct ourselves when we are at complete opposites with a differing opinion. New reports constantly highlighted Justice Scalia’s close friendship with Justice Ginsberg. They couldn’t have been more apart on many legal and philosophical issues, Scalia the Gibraltar of conservatism and Ruth Bader Ginsberg the stalwart liberal. I suspect that their respect for each, however different philosophically, and their desire to promote the truth allowed for this unusual friendship. It also serves as a stellar example for all of us, people of faith and secularists that we have far more in common than we have differences.

I am a person of faith, even though my own path might differ in tone and interpretation from others under that broad umbrella. If those who are secularists presume, therefore that I sit in judgment of them, they would be mistaken. I weigh and consider all opinions, regardless of one’s affiliation (or lack of it).

I am not a theologian, but my faith rests, in great part, on the Golden Rule, one that should apply to all of us. When you add the underpinnings of virtues that many religions support—kindness, charity, humility, patience and diligence—I think we have a common ground upon which everyone can agree regardless of their attitude toward faith and politics. As Thomas Jefferson said, "I never considered a difference of opinion in politics, in religion, in philosophy, as cause for withdrawing from a friend". That’s my take, what’s yours?