Portable Benefits: Traveling With A Cloak Of Security 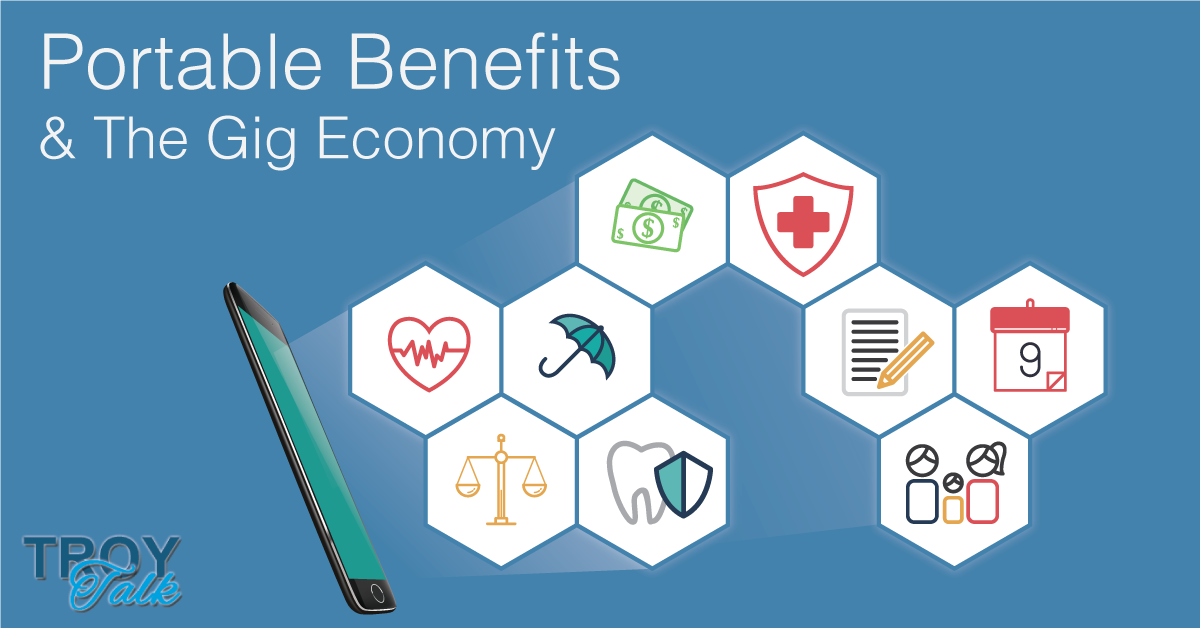 The Internet economy has given us many new words, and two recent additions are “portable benefits.” They might be new, but it is an important term because it stands to affect a huge portion of working Americans.

It refers to the benefits that follow you no matter where or how you work.

The American workplace today is vastly different from what was standard in years past. You got a job, received a paycheck, and had some benefits that provided a cloak of coverage against misfortune. That would have been the typical American employee.

A major change is under way. Today, about 16 percent of American workers are employed by temporary help agencies, hold an “on-call” position or are independent contractors and freelancers, according to a recent study by the Pew Charitable Trusts. A decade ago, it was only 10 percent. Who are these people?  They’re people we know. Think of Uber and Lyft drivers, your cleaning person, the handyman you call, freelance artists and copywriters. And if you have part-time income for independent work, you fit the bill too. This movement has gained the name the “gig economy.”

Few doubt that this trend of independent contractors will lessen, which is why some states — and even cities — are eyeballing the changing workforce dynamics by asking basic questions about the benefits — or lack thereof — granted to these workers.

“Lawmakers say the world is changing, and regulations need to keep up,” according to the Pew study. “Some 40 percent of American workers don’t have a full-time job, meaning they may not have a full set of benefits, making it harder to weather life’s shocks, from a family illness to a layoff.”

However, I don’t believe that in New Jersey we can afford to sit on the sidelines. The trend is occurring before our eyes, and working people should have access to reasonable benefits. Indeed, the failure to do so could ultimately add to our costs indirectly. (Consider the uninsured person who uses the emergency room as his or her primary doctor.)

This is why I have introduced a proposal, A-4705, which requests that the New Jersey Department of Labor establish a system for portable benefits for workers who provide services to consumers through contracting agents. My idea would require contributions to a benefits fund only if they provide services to the consumer in New Jersey.

What type of benefits are we talking about? It could include:

·      Other benefits determined by the qualified benefit providers on behalf of the workers.

There are two underlining tensions with this issue. The first is the question of misclassification. Many companies contend that those who work for them are independent contractors, thus not subject to receiving benefits. Some companies use this as a smokescreen because it is an appealing economic boost to their bottom line.  This proposal wouldn’t factor into New Jersey’s legal determination of employee status. More frequently, however, we see court challenges to settle the issue, and regardless of the outcome, every worker deserves the protections that existing labor laws afford. However, this issue provides the flexibility that both employers and employees like about this contingent work.

The other issue, noted by the Pew study, raises the possibility that in the process of developing a benefit contribution program, it could impose extra costs on businesses and customers. The debate has started. What should be clear is that we are in the beginning stages of a dramatic shift in the benefits landscape, and it might be a while before there is unanimity on portable benefits.

However, I don’t intend to allow New Jersey workers to lose out. I have an explicit goal with this bill. It is a practical tool that will give people more confidence to continue working in nontraditional occupations, and it will ultimately provide some degree of coverage if a difficulty arises. Lastly, it thrusts New Jersey into the forefront of this discussion that truly needs to be addressed from a national perspective. No one gets rich here. What workers get is the most basic trappings of the middle-class American dream: a range of benefits consistent with their efforts and contributions in the workplace.

The modern workplace is rapidly evolving, whether we acknowledge it or not. We can stand idly by and ignore it, as more and more people are taking these nontraditional employment routes, which often leaves them in some financial limbo or we can try and be creative with a solution. This idea seeks to be the latter. That’s my take, what yours?