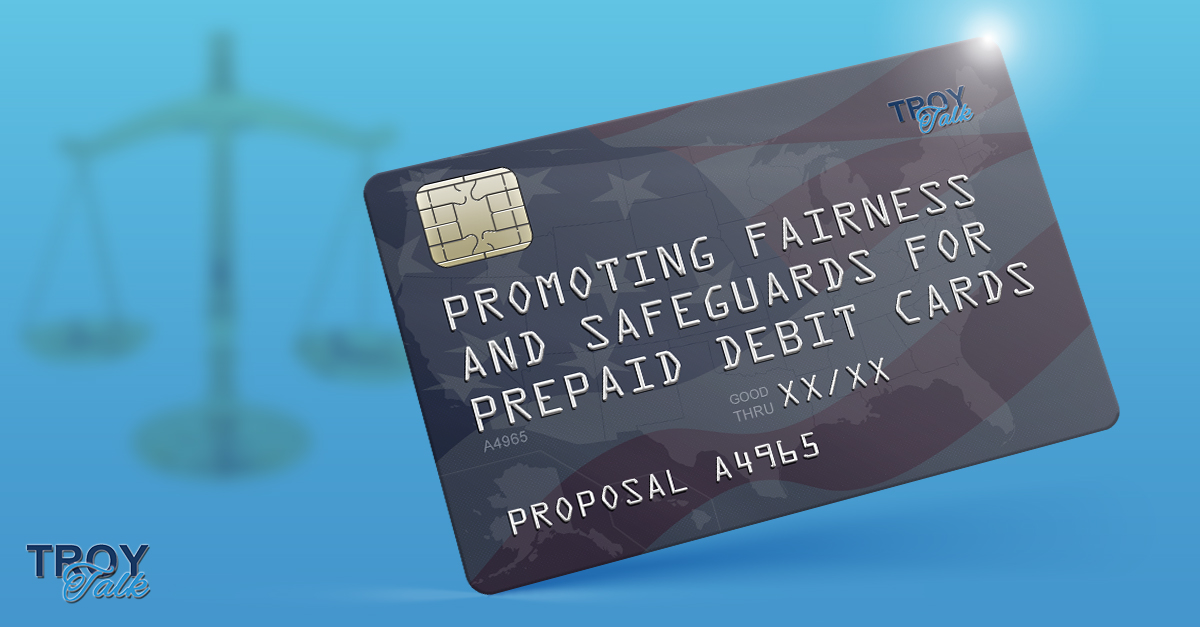 I recently drafted a proposal, A4965, which regulates prepaid accounts by limiting the fees that may be charged in connection with those accounts. The proposal would also limit a consumer’s liability for an unauthorized electronic fund transfer involving the consumer’s prepaid account, and require financial institutions holding prepaid accounts to disclose certain information to consumers. It is mirrored off of the regulations that were issued by the Consumer Financial Protections Bureau (CFPB), which have been under assault by President Trump and members of the Congressional leadership.

The idea of prepaid cards is a sensible approach for some people who work and who are unbanked or underbanked according to a Federal Deposit Insurance Corporation (FDIC). That means they either do not have access to a bank or their circumstances dictate a limited range of services and relationship with a banking institution.

A prepaid card allows someone to use a credit-like card to pay for purchases. Frequent users of prepaid cards include those with a history of financial problems or a record of bad debt. Additionally,  a small percentatge of prepaid card holders are middle- or upper middle-class people also use prepaid cards because it is less expensive than a checking account. However, according to the National Consumer Law Center unbanked prepaid cardholders are more likely to be female, disabled, young, unemployed or African American, and less likely to have a college or postgraduate degree. Furthermore, according to a report by the Pew Charitable Trust unbanked prepaid cardholders have a household income of under $25,000 a year.

Users of prepaid accounts can only spend what’s available on the card, which serves as an instructive lesson in financial discipline. The prepaid cards are a far better alternative to check cashing establishments that charge a fee — sometimes an exorbitant amount —to consumers who often have low or modest incomes. Russell Simmons, the co-founder of Rushcard, a prepaid card company, said a “2015 FDIC survey tells us that 33.5 million households – 26.9 percent of the country – are unbanked or underbanked. According to The Nilson Report, Americans charged $244 billion using prepaid cards in 2015. The usefulness and value of this tool are indisputable.”

My proposal requires financial institutions to provide a consumer whose funds rest in a prepaid account with a monthly account statement that sets forth certain details for each electronic fund transfer during that month.  It also exempts a financial institution from this requirement if it makes available to prepaid account owners the account balance through a readily available phone line, and 90 days’ worth of account transactions.

Further, the proposal permits financial institutions to charge fees in connection with a prepaid debit account with certain stipulations. I am not opposed to prepaid account holders paying fees to institutions sponsoring the cards. However, those fees must be reasonable, they must be transparent, and they must not place a user into uncomfortable or unfortunate circumstances because the institution didn’t identify its policies in clear English.

Thankfully, Congress’s recent attempt to repeal these rules on a national level was averted last month, though not from a lack of trying. And, with the President’s budget proposal taking aim at the agency, which is charged with enforcing these regulations, I cannot sit idle and allow it to negatively impact New Jersey residents. My proposal will protect against any future efforts by putting in place safeguards that will help consumers avoid getting stuck with unexpected and excessive charges and fees, while ensuring the protection of their money if they lose their card or it’s stolen.

This bill offers a touchstone of practicality and common sense. Sometimes we adorn legislative initiatives with complex language, broad implications and a time frame that works against consumers before they begin to feel its effect.

This is a very real proposal because it will have an impact for those who have a constant struggle for financial independence. The millions of consumers who increasingly use prepaid debit cards deserve the same robust protections for those cards that apply to traditional credit and debit cards. The provisions of this bill offers common sense transparency for sometimes hidden fees and fraud protection to guard against unauthorized charges.

Now some may argue that incorporating these rules is just the latest example of governmental overreach. This is a pragmatic attempt to limit the ability to incorporate a business model that profits on the backs of those struggling financially. I think that very situation demands that government step in to provide, again, common sense consumer protections.

There is no giveaway here, and it’s not charity. I’m seeking to ensure a fairer approach for our citizens who have come to rely on this go-to financial product because they have less than a robust relationship with their personal banking. My proposal might not move a mountain, but it does provide a more accessible path to those who want to ascend to the mountaintop of improved financial security.