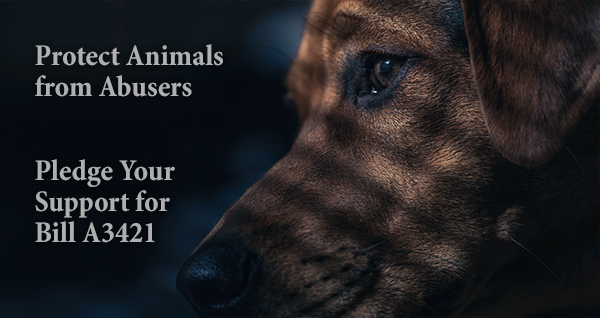 We’re not the first, but this is one time New Jersey should be an enthusiastic follower.

The idea is particularly pertinent if someone plans on working with animals. Just as we place extra trust in teachers and law enforcement, so too should we ensure that those engaged in the handling of animals have a spotless record.

A registry also helps the general public. If you have a pet that you intend to either sell or give away, what assurances to do you have that the new owner doesn’t have a record of abusing animals? The registry is not a perfect solution nor is it foolproof. However, it is a manageable, first line of defense to which even the public can avail itself.

Some localities have animal abuse registries, like New York City, but Tennessee is the first one that is statewide, which is a broader, more encompassing effort.

That’s why I’ve recently introduced a proposal, A3421, which would create such a registry for all of New Jersey. My legislation would not only list the names of offenders but would prevent anyone who is or hopes to become an animal control officer of serving in that capacity if their name appears on the registry. The registry would be available on a website and provide the name of anyone convicted of animal abuse in either a criminal or civil case.

There is a larger and unfortunate link that exists on this issue: Abusing animals is sometimes a pattern of behavior for some people who turn their viciousness toward humans as their victims. The more we expose this type of deviant behavior, the more likely we are to protect animals (and humans).

Several years ago, I introduced “Moose’s Law”. Moose was a lovely and loving Labrador retriever who died because of the neglect of a “professional” animal trainer. Moose’s Law would have banned any professional animal abuser from ever working in the field again. Unfortunately, this bill was pocket-vetoed by Governor Christie in 2014. I remain committed to protecting our pets from abuse and preserving New Jersey’s long-standing reverence towards animal rights. That is precisely why I have kept introducing this bill and will continue to fight until it is enacted.

In both instances, I have attempted to offer legislation that speaks to the very core of this issue: We must protect those, and yes, that includes animals, which do not have a voice of their own.

I know that animal and pet owners understand precisely what I mean. And, I know further that they are passionate about their pets. I feel comfortable in saying that the establishment of a registry that lists those guilty of animal abuse is legislation to which we all must say “Yes.” That’s my take, what’s yours?