Putting Tax Abatements Under The Microscope 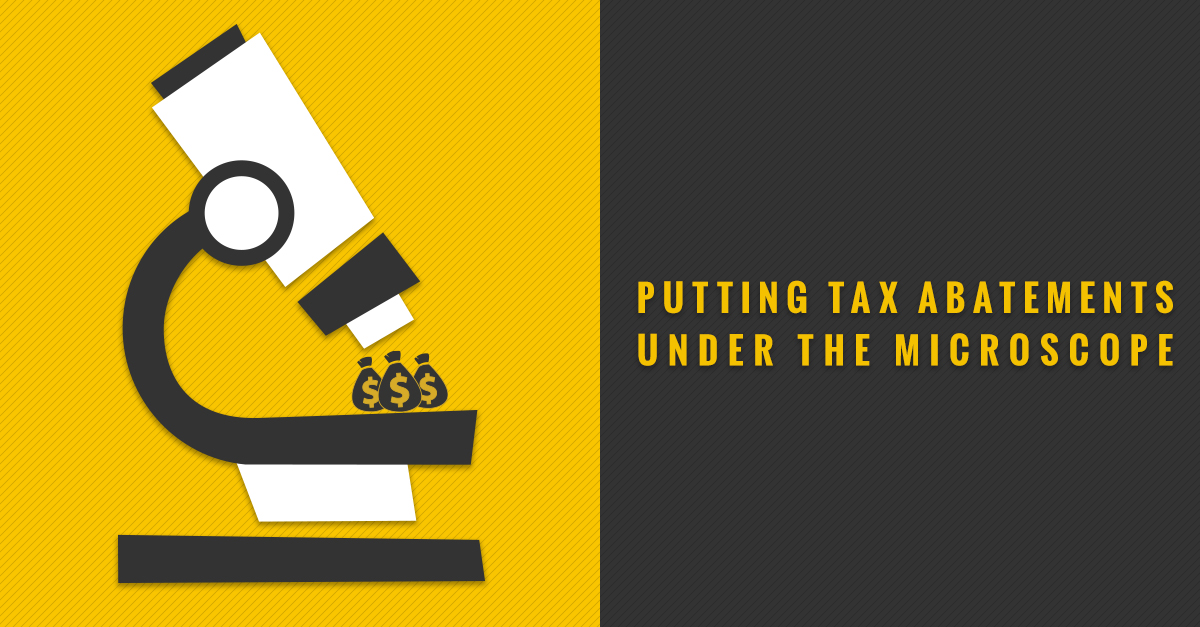 The words “tax abatement” often strikes a responsive chord depending on who reads or hears them. For some, especially those of a business mindset, there is the suggestion that some improvement or development in the area is under consideration. A good business move. For others, the gut reaction is that local or state government is participating in a “giveaway” to business interests who receive a soft landing for making an investment from which they expect to profit. An accommodation at taxpayers’ expense.

In its simplest form, this issue causes concerns to some because in many instances, the disbursement of the abatements tends to shortchange local school aid, which should rank high on our list of community priorities.

Abatements reduce or sometimes eliminate the amount of taxes a business would pay if they locate in a specific jurisdiction. Tax abatements usually have a time limit. The idea is to attract investors into a certain area that would not otherwise see such development without the use of this incentive tool.

Yet, as noted, lower or less taxes mean less money for schools. This isn’t an idle observation. The New Jersey State Comptroller’s office issued a report a few years ago that said: “New Jersey’s municipal tax abatement program is pulling critical funding away from school districts and leave taxpayers to pick up the cost.”

So how should we judge tax abatements? Simply looking at what revenue has been forgone does not tell the whole story. The added development and the economic activity it generates have to be also factored into the equation. Either way you look at it, what cannot be debated is that we need to ensure greater transparency and accountability to New Jersey’s tax payers with regards to the abatement process.

With this in mind, I have introduced two proposals that examine the issue of tax abatements more closely.

The first, Assembly No. 4439, requires municipalities to file copies of tax abatement and exemption agreements with [the] county chief financial officer and county counsel within 30 days of execution. This will provide a heightened level of public scrutiny over the awarding of these financial incentives.

The second, Assembly No. 4440, would require municipalities to share certain payments received in lieu of taxes with counties and school districts; informs counties and school district of applications for tax exemptions. As stated earlier, the issue of lost revenue for our school system is one that we have to take seriously. New Jersey continues to be nationally recognized for the high performance of our education system. Shorting the resources necessary to sustain that level is seemingly a poor calculation.

The dilemma is that in New Jersey, there are flaws in the tax abatement program, according that State Comptroller report.

The issue is that we really don’t know if awarding abatements makes sense, that is, if it has a positive effect on the economic health of a community or whether it amounts to a giveaway that helps the developer and no one else. That debate will continue as interested parties on both sides make reasonable and rational cases for their arguments for or against their use. I, for one, believe that there is enormous benefit to utilizing our tax code to stimulate economic activity.  However, tax abatements should be delivered through a transparent process that ensures that those finite resources are used judiciously and in the best interests of taxpayers.

The State Comptroller also noted that “abatement practices go largely unmonitored by the state and that municipal governments have little incentive to comprehensively assess whether an abatement is necessary to attract development, whether this type of development is needed in the first place or whether the abatement ultimately achieves its desired economic goals.”

As stated previously, this is the delicate balance that local leaders face: how to turn often blighted or abandoned parcels into taxable property. I am not saying that abatements or PILOTs (Payment In Lieu Of Taxes) should be abandoned, but clearly they require more accountability and scrutiny. Local residents and local schools in particular should have access to information about abatements so that they can hold their leadership accountable.  There should also be a clear understanding of what the impact, positive or negative, would be on the school system.

The proposals I have introduced fit under the theme I have continually tried to interject into government, which is to increase transparency and accountability into its operations.

I believe that when used wisely and on a case-by-case basis, with all the facts accessible to the public, an abatement could make solid economic sense. But, if the abatement only serves to benefit the person requesting it, then we should reject it. Let the facts, in an open and transparent process; guide us to reach a decision. That’s my take, what’s yours?