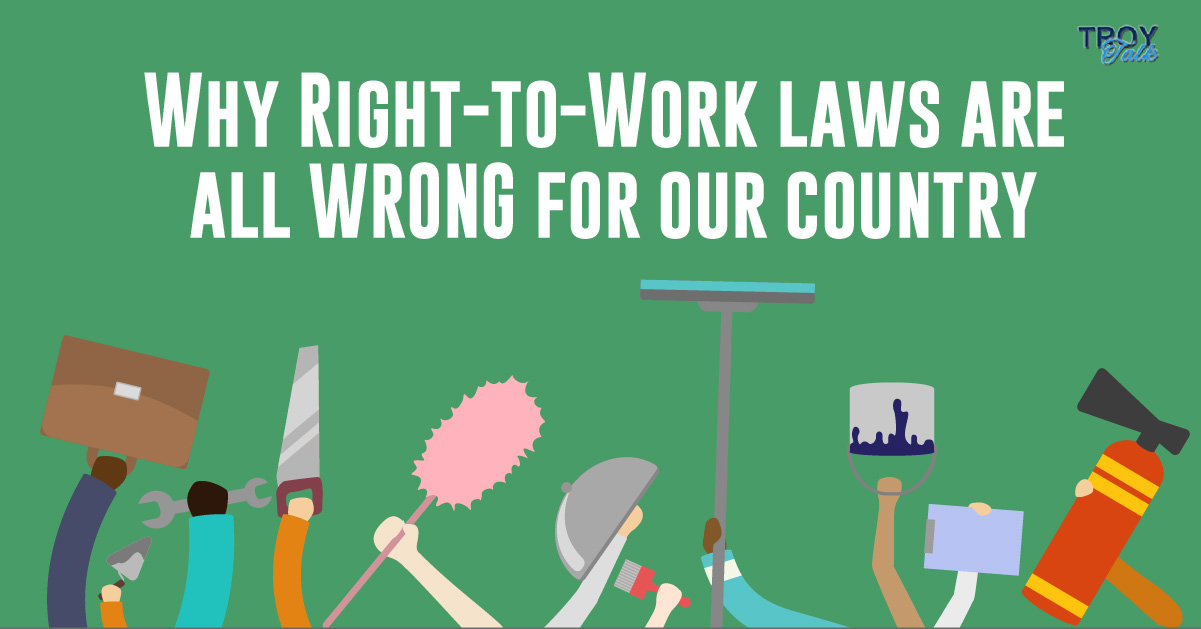 There is an old adage, "If something sounds too good to be true, it most likely is." I am reminded of this when I hear proponents of Right-to-Work laws talk about their impact on the labor market and the overall economy. Despite its seemingly well-intentioned name, this type of law does not guarantee anyone a job or provide a state with an economic boom.

So what do Right-to-Work laws mean?

To understand what these laws are all about, we must first understand their formation in a historical context. The Taft-Hartley Act of 1947 allowed individual states to pass laws prohibiting “closed shops,” businesses in which every employee was required to be part of the union and pay dues. Right-to-Work laws are state laws that stop employers and employees from negotiating an agreement that requires all workers who receive the benefits of a collective bargaining agreement to pay their share of costs for representing them. Right-to-Work laws dictate that unions must represent every eligible employee, whether he or she pays dues or not. Stated simply, these laws, enacted in 24 states, allow workers to get all the benefits of union membership without having to pay for them.

While these laws are against everything that I, as the son of and current member of a trade union, believe in they are also bad for state’s economic fortunes and quality of life. The recent result in Missouri earlier this week, as residents overwhelmingly rejected its state Right-to-Work statute and according to data from the U.S. Department of Labor and the U.S. Census Bureau bears this point out.

Here are statistics to illustrate that point:

Sometimes blunt language is the only way to convey the truth. “The name ‘right to work’ is a lie,” according to the Center for American Progress. “Workers can decide to opt out of membership at a unionized workplace and pay a reduced fee that covers the costs the union pays to negotiate for wages and benefits and represent an employee if they have a problem at work. Opponents of unions frequently claim that workers who decline to join a union are still legally required to support that union’s political activities. In reality, however, these fees exclude the costs of political activities.”

This raises a basic question that places the discussion in context. Why would some legislators favor Right-to-Work laws under their jurisdiction? Corporate interests have been relentless in their assault on unions and at the forefront of promoting Right-to-Work laws. There are several reasons that some states favor Right-to-Work laws, but two are worth highlighting. If corporations can reduce union influence via membership, they can reduce workers’ wages and benefits. In short, they won’t have to share the profits that workers help create. Second, if union membership declines, it weakens organized labor as a voice in the battle to promote fair, equitable and reasonable economic policies.

And just what are those policies? They’re the same ones that many of us benefit from, including the Social Security Act, the Voting Rights Act, and the Affordable Care Act. Has anyone asked themselves why is it that in authoritarian countries unions are virtually nonexistent? It is because unions protect the interests of the worker and provides a pathway to the middle class.

A strong labor movement was once the bedrock of our nation’s middle class. Policies like Right-to-Work laws undermine that foundation and foster income inequality that allows the “Haves” and “Have Mores” to distance themselves from the rest of our nation further. These laws heighten that disparity. There is another saying from long ago that underscores the value of the labor movement to our society and why our organization cannot allow these laws to take hold. The saying goes, “We …Us… Our … Every Minute, Every Hour.” It simply means - WE fight every day to ensure a quality way of life for all of US to enjoy, so that OUR next generation will be able to live and prosper. That is why Right-to-Work laws are all WRONG for our country.