Shattering A Tradition Of Transparency 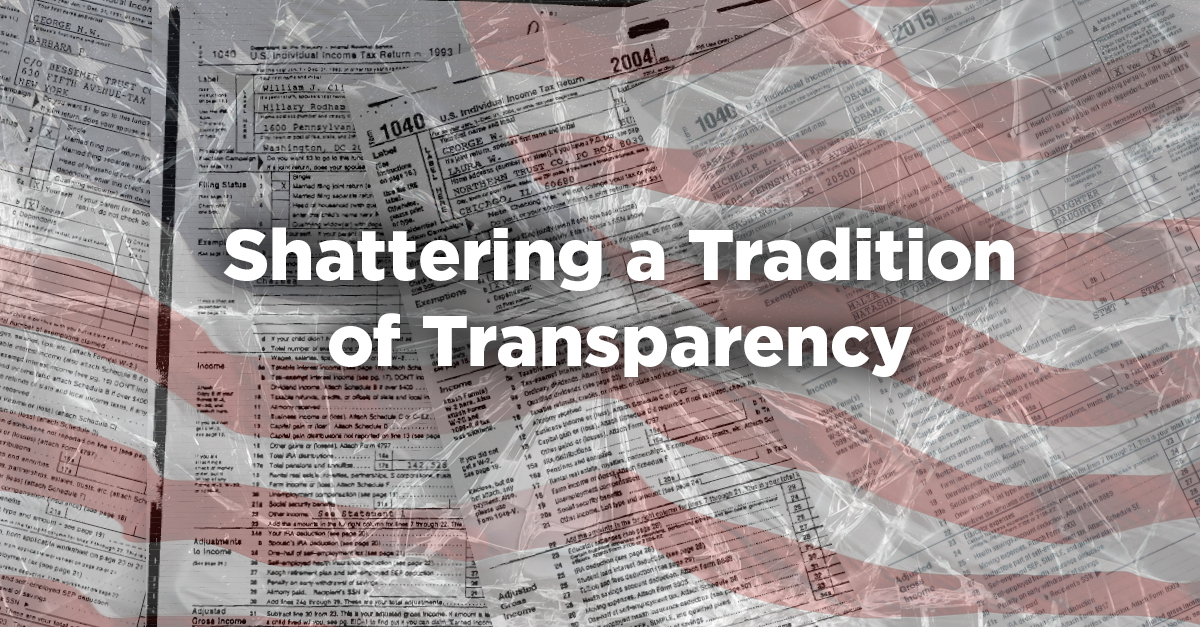 For decades, a fundamental expectation in politics has been that candidates who run for the presidency and vice presidency of the United States disclose their tax returns. That is until the unprecedented campaign of 2016, of course. President Donald Trump has adamantly refused to release his taxes to the public, which while is his prerogative, is a dangerous sign with regards to the transparency of the most powerful position in the world.

While it isn’t a law, it’s been a tradition, and since the 1970s, most presidents and vice presidents have released their tax returns, according to the Tax History Project (if you want to examine tax returns from past presidents (and candidates) going back to Franklin D. Roosevelt, visit  http://bit.ly/1qo4dz8.

Releasing one’s taxes has become an essential transparency test for every presidential and vice presidential candidate. Former Republican nominee Mitt Romney, acknowledged that our two top elected officials should continue this tradition. “The potential for hidden, inappropriate associations with foreign entities, criminal organizations, or other unsavory groups is simply too great a risk to ignore for someone who is seeking to become the commander in chief,” Romney said, according to one news report.

What is President Trump's answer to not disclosing his taxes? “We won,” a retort implying he didn’t have to follow this important tradition, appears to be his response. I believe, as do many in both political parties that he should disclose his tax returns. And, it’s not just the political establishment who feel this way. According to a January ABC News/Washington Post poll, 74% of Americans believe that the President should release his tax returns. I can’t emphasize too strongly how important transparency is so that citizens maintain faith in the political process and it doesn’t cave into a view of politics that smacks of nothing more than backroom dealing.

Beyond simply the issue of transparency, there are many reasons why a presidential or vice presidential candidate should release their tax returns, reasons that can hold grave consequences for our nation. Voters deserve to be armed with the whole truth before they make such a weighty decision. Since there seems to be an unwillingness to do anything about it in D.C., My colleague, Assemblyman John McKeon, and myself have looked to address this issue in New Jersey.

We have sponsored a proposal, A-4520, that requires any U.S. presidential and vice presidential candidate to disclose his or her federal tax returns taxes (for the most recent five-year period) if they wish to appear on the New Jersey ballot during the next national election. The bill would require candidates to file their tax returns with the Division of Elections. The division would then post the tax return on its website with 10 days.

The power of this legislation is that it is not simply a request for discourse but rather a demand on the part of New Jersey citizens. If you want New Jersyans to vote for you, there must be complete transparency on the part of candidates seeking the highest offices in the land.

New Jersey is not alone in this fight. There is a coalition of like-minded states and individuals that see this issue as a movement that will “get the attention” of our president and vice president. It is the ballot access project, and its goal to force a candidate to disclose taxes if they wish to appear to appear on a state ballot.

According to the project, “State Assembly leaders in New York, California, Massachusetts and Rhode Island have introduced legislation that can…force future presidential and vice presidential candidates to disclose tax returns fully.” The project lists where many other states are in this process and offer a toolkit for guidance on what citizens can do to become involved.

Occasionally, our citizens lament that government doesn’t listen to them or that they cannot have a direct impact. I truly believe this issue and the direction of this proposal is a perfect example of participatory democracy that demands nothing less from our candidates than they confirm that they have no financial entanglements marring their run for the two highest offices in the land. Moving forward, I will be looking to amend this proposal to also include the office of Governor and the State Legislature under these requirements. On this issue, I associate myself the remarks of former President Ronald Reagan: “Trust but verify.” That’s my take, what’s yours?