So You Want To Run For Office? 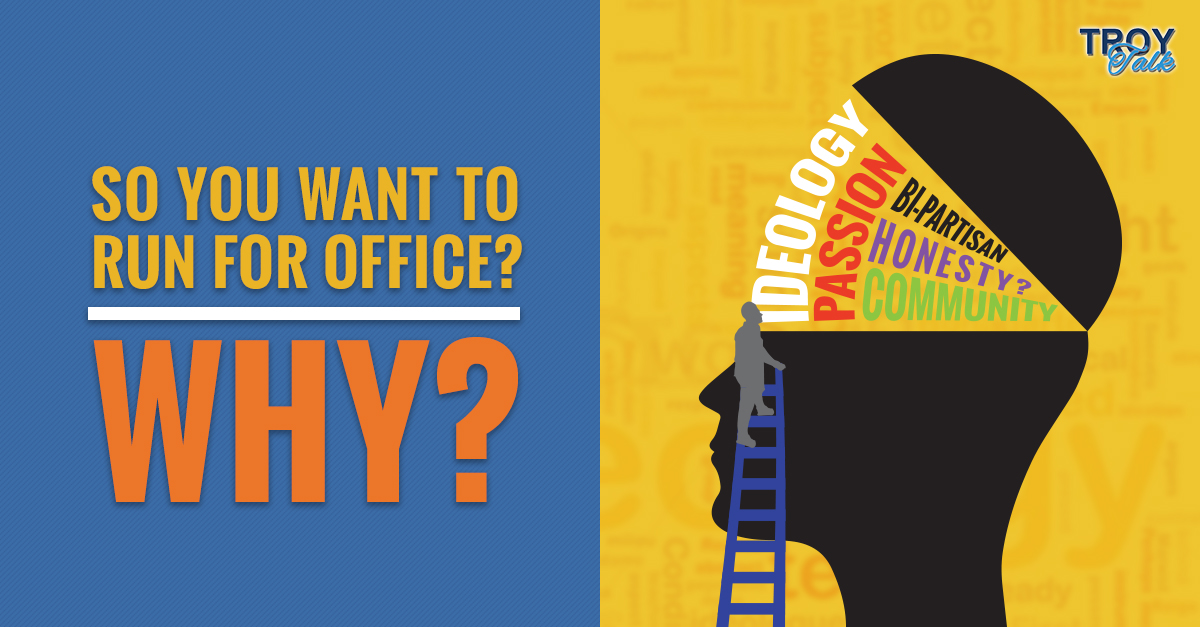 “Why are you running for election?” This is a fundamental question that every person running for elective office will be asked on the campaign trail at some point. It is also a question that you better have a darn good answer for, not just for the questioner but for yourself as well. A strong democracy is built upon an engaged citizenry as well as committed and competent, individuals willing to present themselves for service in public office. By stepping up to run for office, the basic tenets of our democracy as designed by our nation’s founders and eloquently presented by President Abraham Lincoln at Gettysburg are fulfilled: “…government of the people, by the people, for the people.” However, running for office and serving as an elected official will also test your own personal constitution in ways you may not have imagined. So, you want to run for office, huh?

Putting yourself and your ideas up for inspection before your friends and strangers alike can be a daunting and often humbling experience. It takes a particular type of disposition that requires the individual to be strong in their convictions, while recognizing that compromise and consensus are the hallmarks of effective governance. It requires a deep understanding of your own personal strengths and weaknesses and whether you have the ability and determination to succeed. It also requires a commitment of time and sacrifice that will often seem like it’s never enough. You may even feel, on more than one occasion, like you’re giving too much.

Sometimes people run for election because they’re deeply passionate about a single issue or problem. This could be the need for a traffic light on your street or the desire for a particular segment of the population to receive representation. Others run for office because they have a deep commitment to their community and want to make it a better place for themselves and their neighbors. These kinds of issues have been the spark of motivation for many people to enter politics. The most important thing, in my opinion, is to keep the passion that made you run in the first place—for however long you are granted the responsibility to serve. Holding onto what motivated you to run is one of the biggest challenges you will face after the ballots have been counted.

Often, “public servants” who become “politicians” while in office end up turning off the electorate. After I won my first campaign in 2011, I visited a senior citizens’ club to say thank you for their support and was greeted by the refrain: “Now that we elected you, don’t become a politician on us.” This has always stayed with me because of the very simple sentiment of the statement. Don’t ever forget that the relationship with the electorate is essentially one of “boss” and “employee.” Those who elect you to office are your bosses. Your responsibility in a representative democracy is to always work to ensure that the interests of your bosses are protected—to the best of your ability. That can be hard sometimes when you have a divergent group of bosses, but it’s what you signed up for when you took the oath of office. It’s what you must do.

That being said, serving in government as an elected official is a noble profession. Serving in this capacity affords you the opportunity to use your skills, talents and life experiences to be a positive force for change in your community. As I said previously, our democracy and all of its instruments (school boards, local, county, state and federal offices) become stronger and better when interested candidates provide voters with choices as to who will represent them. My final thought is to always remember that titles do not make the person. It is the person that makes the title. That’s my take. What’s yours?