Singleton & Addiego Join In Public Forum on ‘Path To Progress’

Joined by Senator Troy Singleton and Senator Dawn Addiego, Senator Sweeney laid out a series of solutions developed by the bipartisan Economic and Fiscal Policy Workgroup of economists, academics and fiscal policy experts to address the problem. The forum was hosted by Dr. Michael A. Cioce, President of Rowan College at Burlington.

“We need to fix New Jersey over the next four years as we try to grapple with the deep fiscal crisis we are facing,” said Senator Sweeney (D-Gloucester/Salem/Cumberland). “We have to continue to make the reforms that will allow for investments that will help move the state forward, making it a more affordable place to live and making sure that government operates efficiently and effectively.”

“It is clear that we can no longer ignore the systemic problems that are crippling New Jersey’s ability to invest in our priorities in the future,” said Senator Singleton (D-Burlington).  “While the Path to Progress recommendations may not be the entire answer to the problem, it has at least raised awareness about the severity of the problems facing our State, and created a conversation around how to best address them.”

“The bipartisan Economic and Fiscal Policy Workgroup of fiscal policy experts found that we are facing a $4 billion budget gap for the Fiscal Year 2023 budget just to meet our pension and healthcare costs and allow for normal 3% annual revenue growth and a normal 3% increase in the cost of services,” said Senator Addiego (D-Burlington).  “We have to recognize the hard truth that we can’t get to the cost of full pension funding four years from now without making fundamental, structural changes in our pension and benefits system.”

Senator Sweeney said many of the recommendations in the Economic and Fiscal Policy Workgroup’s Path to Progress report could make New Jersey both more competitive and more affordable. He applauded Governor Murphy for incorporating some of the reforms into his budget proposal, but said that more can be done.

The report found that significant cost savings and educational and service improvements can be achieved through initiatives such as K-12 regionalization, increased use of shared services at both the county and municipal level, and shifting the cost of Extraordinary Special Education from the local to the state level.

Senator Sweeney said the new hybrid pension system recommended by the Workgroup is not a new idea; 12 states, including Pennsylvania, Rhode Island and Ohio, have already adopted hybrid systems. The plan would fully preserve the existing pension system for teachers and state, county and municipal employees with five years of service.

“We welcome this public forum and discussion on issues or real and lasting significance,” said Dr. Michael A. Cioce, President of Rowan College at Burlington. “I give Senators Sweeney, Singleton and Addiego credit for their willingness and ability to listen to the public and engage in a sincere conversation.” 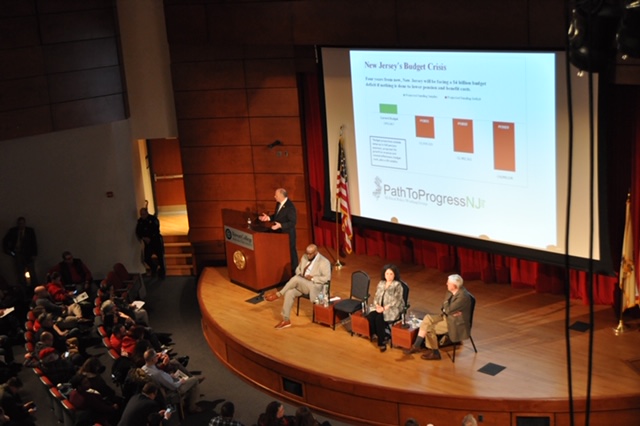