Take Your Child To Work Day

Today is Take Your Child To Work Day. The roots of this observance go back to the early 90s when it was exclusively for young girls to address self-esteem issues. In 2003, it was expanded to include boys in recognition that exposure to the workforce was good for kids regardless of gender. Additionally, it also serves as a vehicle to provide an opportunity for mentorship for young boys and girls who aren't linked by family ties to be exposed to adults in skilled professions. 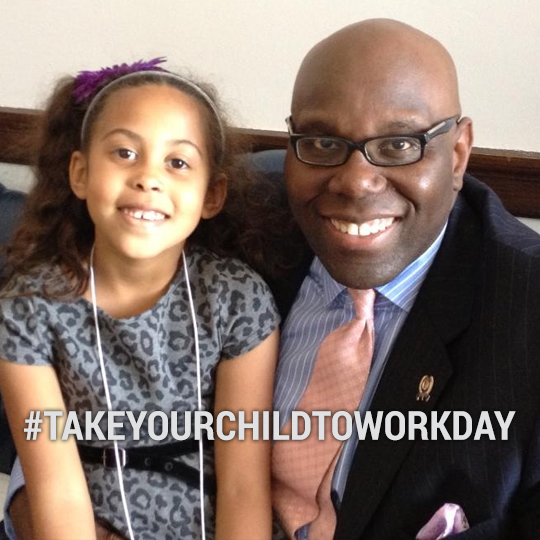 Last year I brought my youngest kids to work so that they can get an appreciation of what Dad's day entails. While I know, that my kids understand that I am an elected official, I don't think they get the full picture of what that means. I am especially committed to exposing my 7 year old daughter to this, as the number of female elected officials around the country continues to grow, I wanted her to see female public servants and the roles that they play in our democracy up close and personal.

This leads me to my thought for this week...the debate going on in our nation's capital and statehouses across the country concerning equality in the workplace. As that debate goes forward, we must continue to encourage our young girls to break the glass ceiling in the business, political, educational or any world for that matter. Unfortunately, these glass ceilings still remain a great challenge for our country to overcome.

They permeate our society regardless of ethnicity as evidenced by the need to develop a multi-cultural campaign to ban the negative stereotype of women who assert themselves in the workplace and in life. The "Ban Bossy" movement shouldn't be necessary in today's day and age. We have numerous examples, though not nearly enough, of strong woman leaders who are changing the face of government, business and all aspects of our society. These women are bosses and not bossy by any stretch.

However, even in a country that has elected an African-American president and has begun to remove the discriminatory barriers to same-sex marriage across several states, having women assume the leadership mantle in the corporate or in some pockets the political world has still lagged. As discussions about gender roles and compensation in the workplace continue to be a point of emphasis in our political and water cooler discourse, it further demonstrates that we still have a long way to go in meeting this challenge.

For instance, it is a fact that women earn less than their male counterparts in the same field doing the same job. Some reports (The White House) peg the difference as 77% while other reports say it's closer to 84% (Pew Center) and as high as 93% (Pew Center) for millenials. Regardless of the percentage, the fact that it isn't 100% should alarm EVERY American, male or female.

While some may try to make this a political football to score an electoral advantage, I look at it simply as a father of a daughter and two sons. This should not be about a poll-tested message point or squeezing another vote out of the electorate, but rather a father's wish that his little girl has the same ability to earn a living at the same rate as her brothers. Our country works best when we live up to its credence embodied in the Declaration of Independence that all men (and women) are created equal. Let's drive to make those words a reality.