The “Dirty” Water Dilemma is Upon Us 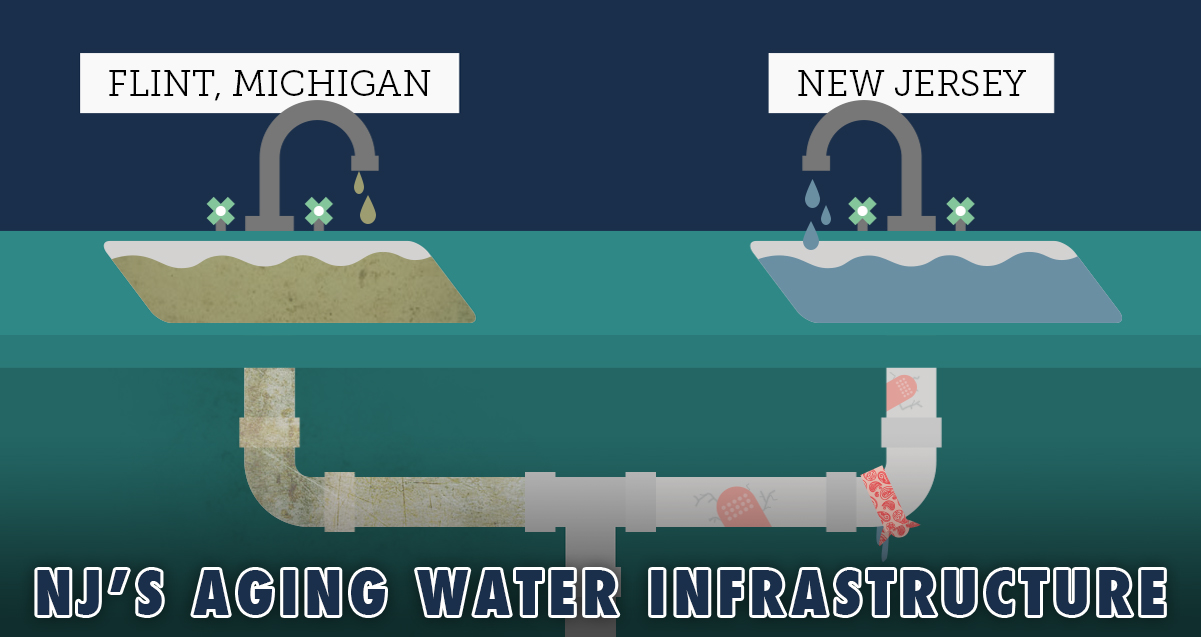 The next time you fill a glass of water from your faucet, it might not be surprising if you think of Flint, Michigan.

Given Flint’s recent media coverage and the unconscionable conduct of leaders responsible for that fiasco, is anyone unaware of how important, indeed, precarious our access is to clean, safe and plentiful water? And, water problems aren’t confined only to Flint, where residents unknowingly drank water contaminated with lead for months. Before Flint, there was the issue of lead-leached water in Washington D.C., Baltimore, Maryland and in 2008 when gallons of toxic coal ash containing lead flowed into the Tennessee River causing enormous hardships to the people of that area. Clean, safe water and the infrastructure that delivers and protects it are a major problem throughout the United States.

What we face today are a myriad of circumstances and a culture of modest indifference that have pooled together and gurgled upward to give New Jersey residents and the rest of the United States a clean water crisis.

Let me explain. We often times take our water for granted. Show of hands…when was the last time that you turned the tap and wondered where it came from or asked if it was safe to drink? Janet Kavinoky, Executive Director of Transportation and Infrastructure at the U.S. Chamber of Commerce, said it bluntly in a recent report: “People think that water should be free. My response is that if you’re in Washington, D. C., you can go down to the Potomac with your bucket, carry the water home, treat it, and when you’re done, figure out a way to dispose of it. It’s hard to convince people that these things cost money, which is why it’s hard to get investment in infrastructure.”

The backdrop to our water system, both in New Jersey and throughout the country, is a highly success initial installation of a water system infrastructure. Municipalities spent time, effort and money that were the envy of most countries. Solid political leadership understood the benefits of the system. But that was a long time ago.

A recent summary, “Ripple Effects” (based on a Rutgers study, “Water Infrastructure in New Jersey’s CSO Cities”), provided four case studies of cities with combined water and sewer systems that had major water-related problems. They are emblematic of the entire state. One of the more startling findings is that much of the piping system of these cities —Hoboken, Jersey City, Paterson and Camden—dates back a hundred years. In Hoboken, some pipes date back to the Civil War.

What has happened since then is that we’ve gone on using the system without spending the requisite amount of money for repair, improvements and updating.

Municipalities have spent money on operations and maintenance, but it’s the repair and replacement—an expensive process— that we’ve ignored.

And the fix for the problem, regardless of how we approach it, will be expensive. It will run into the billions of dollars and could take decades to complete, but failure to take proactive steps could lead to a disastrous, Flint-like scenario in New Jersey.

And unsurprisingly, if we don’t deal with the issue now, there are potentially severe economic consequences. “Upgrading our water infrastructure is not just a federal and state mandate,” said Peter Kasabach, New Jersey Future Executive Director. “It’s an economic imperative for cities that want to continue to attract businesses and for residents who seek an urban environment where they can enjoy clean, dependable drinking water and avoid encounters with raw sewage and storm water.”

There is an answer, and it is unfolding before us. This past December, regulatory officials, scientists, governmental advocates and representatives of New Jersey municipalities and corporations gathered at the New Jersey Institute of Technology to address current and future water-related issues. This coalition, dubbed Jersey Water Works, intends to “focus on transforming New Jersey’s inadequate urban water infrastructure by investing in sustainable, cost-effective solutions that provide communities with clean water and waterways, healthier, safer neighborhoods, local jobs, flood and climate resilience and economic growth.”

Just in time. Because I’m an optimist, I believe we have the leadership, political will and scientific expertise to address this problem, to fix a combined sewer system problem that allows for the dumping of more than seven billion gallons of raw sewage into our waterways annually.

I would suggest that we are just beginning to turn the corner on this issue as municipalities and citizens become acutely aware of the dire consequences of any further delay. Flint is not an anomaly but a dangerous harbinger of what can come if we don seize this moment and make the proper investments in our water infrastructure. But, to accomplish this it will take more than just government alone. It will require a populist groundswell from each and every one of us to make this happen. Let’s join together to support efforts that make continued accessibility to clean, safe water a priority. That’s my take, what’s yours?