The “First” Among the Amendments 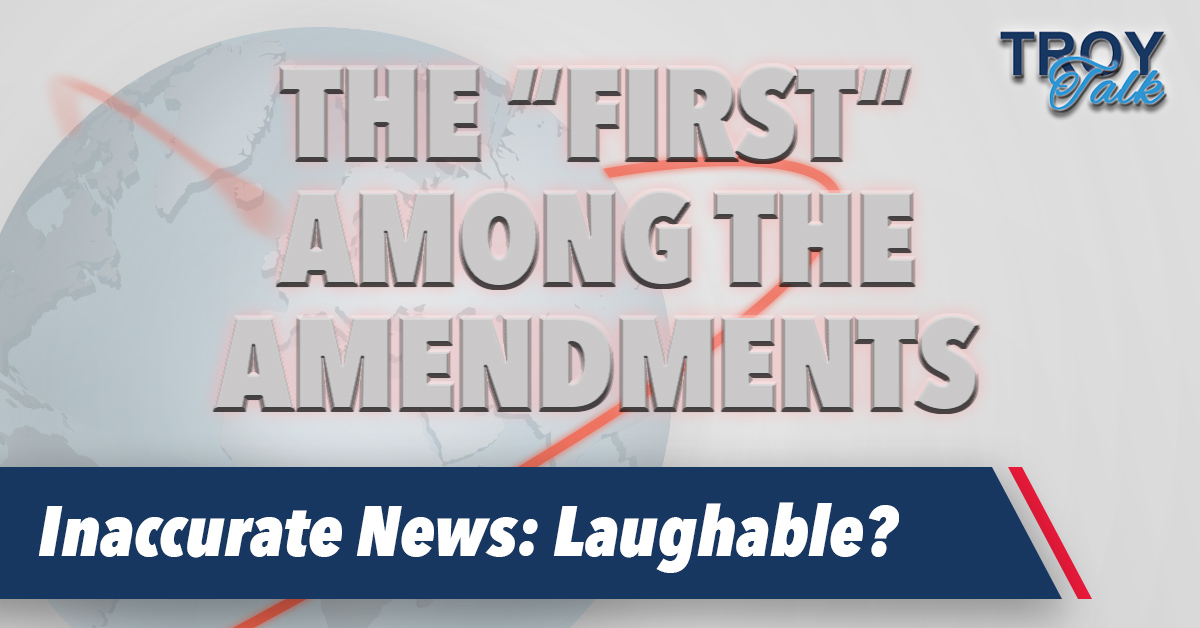 Have you ever read a news story so laughably inaccurate that you said to yourself, “no one would ever believe this stuff?”  Well, guess what these stories aren’t that laughable anymore. In fact, it’s pretty scary how these stories are becoming more common these days. What’s worse is that they are being intentionally promoted to the public.

I am personally concerned with the proliferation of these fake news stories and their ability to shape the views of many. This coupled with the constraints that some are imposing on the press, heralds the movement into a very dangerous period in our country's continued evolution. Dismantling the free press through both covert and overt means has been a central component of the blueprint that dictators have used to sow the seeds of tyranny throughout history. Safeguarding this most American of rights from this threat is essential to our country's ability to govern transparently and effectively. It also fortifies the trust that the public requires to have faith in the very institutions that make up our democracy.

Freedom of the press in our country is in a far more parlous state than you might imagine. It is now under assault by interests both foreign and, unfortunately, domestic.

Many around the world have long viewed our country as a beacon of hope for those who have sought freedom. The First Amendment, and the free expression that it embodies, are one of the fundamental reasons why. Further, this right allows anyone to examine and challenge our elected officials and our political culture without fear of government retribution.

This envokes the envy of millions across the globe and the scorn from our country's enemies. The fact that we can freely allow such a wide berth for the hearing of divergent viewpoints in the public space, without concern that it will tear down our democracy, terrifies our enemies. Our country’s potent exercise of free speech and the free expression of different ideas would expose their misdeeds and ultimately lead to their downfall if such a thing existed in their countries.

Occasionally, when we invoke highbrow terms like liberty and freedom, it becomes almost too easy to overlook how deeply these principles permeate our society. In the United States, we can virtually say, print or broadcast, what you think no matter how much an individual or group might disagree with you. But more than just saying it, you have no fear of reprisal. And that is the key. Yes, you might irritate your neighbors if they disagree, maybe you’ll see a counterargument to the one you made in the media, you might even face a touch of verbal hectoring, but whatever the upshot, the First Amendment guarantees that no thought police will knock at your door and take you (or family members) to prison. And much of this press freedom we enjoy today and must safeguard for the future arises from a 1964 Supreme Court decision, Times v. Sullivan.

In 2014, we celebrated the 50th anniversary of this most important First Amendment ruling ever made by the Supreme Court. That case arose when a government official sued The New York Times for libel after being mentioned indirectly in an advertisement that was critical of the police in Montgomery, Alabama. During the civil rights movement, some local governments would sue the press to hinder media coverage. The official initially won the case under Alabama law, but the case ultimately went to the Supreme Court on appeal. The court ruled for The New York Times.

Justice Brennan wrote the majority opinion, noting, “I strongly believe that the Constitution accords citizens and press an unconditional freedom to criticize official conduct.” He would add: “[W]e consider this case against the background of a profound national commitment to the principle that debate on public issues should be uninhibited, robust, and wide open, and that it may well include vehement, caustic, and sometimes unpleasantly sharp attacks on government and public officials.”

Therefore, we cannot allow this most fundamental of American rights to be undermined. We cannot allow our country to have the institutions that have allowed our nation to be the leader of the free world to be compromised by a reckless disregard for the truth and a dismantling of the press. So, we must remain collectively vigilant in our efforts to preserve this right. Its stewardship and protection does not fall solely to professional journalists and those in the media, but the fight to protect it falls to each and every one of us. That’s my take. What’s yours?