The Imperfect Greatness of America 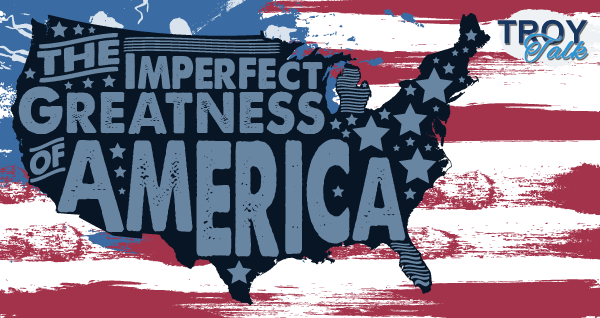 Whether you like him, hate him or are indifferent, Donald’s Trump’s slogan, “Make America Great Again,” is one of those catchy phrases that seems to grow in power if you keep repeating it. Certainly for the Trump campaign, that sound bite has become a successful mantra.

The Trump slogan and the Democratic response to it got me thinking a great deal about the war of words to which we’ve been exposed and, more importantly, what it says about each political party and those who support them.

The “Make America Great Again” slogan denotes the thought that our country is not living up to its full potential for its citizens and suggests a yearning for the "good old days." It speaks to a segment of our population with the insinuation that America has stopped being “great” for them. This group has seen their jobs outsourced and their economic opportunity and wages stagnate while corporate profits rise to historic levels. It also masks a not-so-veiled dog whistle or siren call to those who believe in derision and divisiveness based on race, gender or sexual orientation. It might not be blatant, but the implication is there, without saying it aloud (in public).

The unsurprising Democratic retort to the Trump motto is that “America is Already Great." This retaliatory response ignores an uncomfortable reality that no one can ignore: income inequality, violence in our streets that grips our neighborhoods, educational segregation that destines some to a narrow and hopeless future, and a system that makes the next Horatio Alger "rags to riches" hero or heroine an anomaly rather than an actuality. We cannot continue to ignore that the system that so many, both Democrat and Republican, have railed against isn't broken. It was purposely made this way.

In the wake of slogans, here is the reality. For many of us, the good old days weren't that good, and the "greatness" that Donald Trump talks about was delivered at the expense of many of those same individuals who now form his most loyal followers. It's a long-discussed conundrum in politics where so many of us vote for leaders whose policies work against our very self-interest. One that has kept the majority of us, regardless of political leanings fighting over smaller slices of the opportunity pie rather than working together to grow the number of slices.

Much in the same manner that other institutions have faced this crossroads, so too do our major political parties face some pretty stark and clear choices. They can re-create themselves, reform themselves or watch the parties perish under the will of the people who loathe what both have come to stand for. The data doesn’t lie. Both brands carry high unfavorable ratings, but we as Democrats have this false sense of empowerment because the Republicans have garnered most of the messy headlines during this primary election news cycle. Rest assured my fellow democrats, we need to do better ourselves or face our own internal revolution.

Early on in the campaign, many smugly predicted that Donald Trump was a high-powered flame that in time would extinguish itself once he faced the withering circuit of primaries. I myself was guilty of thinking that. He not only didn’t wither, he has become the presumptive Republican nominee.

On the Democratic side, we almost had to yawn as Hillary Clinton, with an impeccable resume depicting duty and experience (Secretary of State, U.S. Senator and first lady), seemed as the unquestioned heir apparent to continue the Democratic occupancy of the White House. It appeared as though we only had to wait for the anointment.

We’ve had a tsunami of opinion about what has occurred, but sometimes you have to adopt a pared down version of Occam’s Razor to get to the heart of the matter. That famous philosopher and theologian postulated that when you have various choices, choose the simplest one.

And that “simple” answer, I suspect rests in the anger or certainly the disappointment of a huge section of voters in both parties. The palpable sense of that is felt at rallies on both the left and the right. A sense that the public is no longer satisfied with traditional politics, and is demanding almost revolutionary change.

Why? Voters lack faith in the party to which they belong and seemingly have even less confidence in the current leadership. They are disappointed across the wide spectrum of what matters in our country: economic stability, leadership, security from threats foreign and homegrown, educational reform and, most important, a sense that the future augurs well for their children. They are tired of hearing that this generation will not advance as successfully as their parents.

I can’t offer a solution in a few paragraphs. No one can. But I would proffer the beginning of a solution.

The leadership of both parties will have to dig deep; that is, to re-create or reform our political party system. Only then will we be able to understand what our constituencies want and not what we think they want. Then we have to present a framework for change that will align those goals with a reality that results in achievement. Finally, we must restore the faith and belief that America IS great for ALL people.

I got into public service because I believed, as I still do today, that it is a noble vocation. And, removing the cynicism that many feel about government is one of our most important jobs as elected officials. We are faced with a trust deficit in the eyes of the public that has shaped a government split into partisan camps that has made it increasingly difficult for the government to meet the demands of our constituent bosses. This has made it difficult to implement initiatives that matter to most Americans. The time is now to correct this. And, the cores of both parties are tired of time-worn rhetoric that just pays lip service to this charge. The failure to offer viable change will leave the Republican and Democratic parties with an identity crisis, and what will emerge might be a party that the current leadership no longer recognizes. The clock is ticking. That’s my take, what’s yours?