The Jan. 6 Insurrection: Accountability and a Reassessment 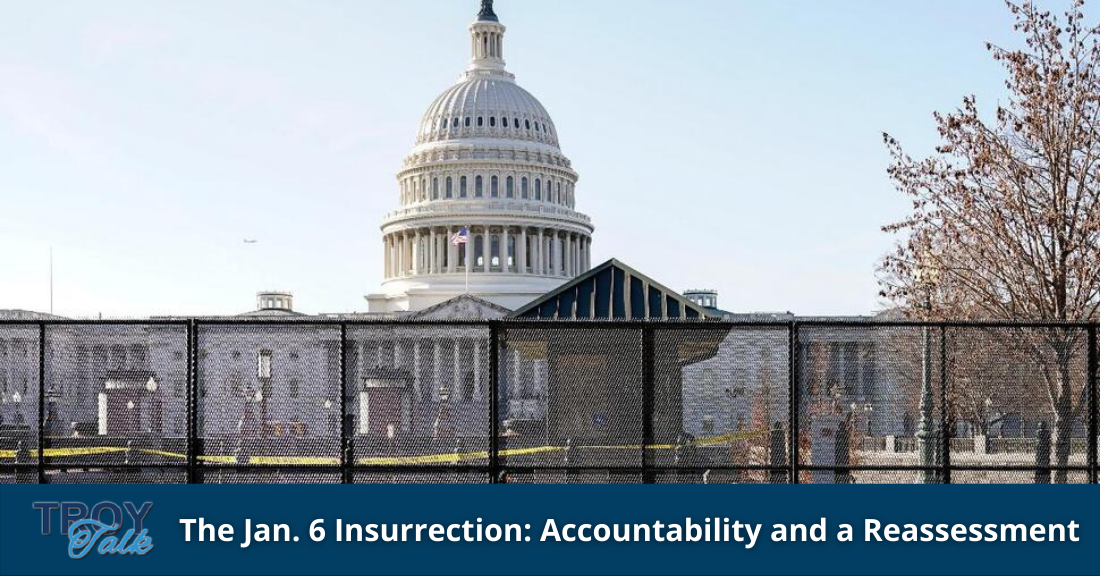 One year ago today, Americans throughout the country witnessed in real time a violent attack on our nation’s Capitol by a mob of our fellow Americans bent on disrupting the certification process of a duly elected democratic government. It was startling and then shocking to see this unfold as the violent mob, directed explicitly or implicitly by forces who had and continue to stoke a larger anti-democracy movement, ransacked the halls of Congress.

In its vicious, uncompromising narrow-mindedness, this mob ignored the decisions by every court in the land that upheld the results of the presidential election. The actions harken to only images and practices that we have seen in other countries and throughout history where authoritarianism based on demagoguery and lies have unraveled democratic institutions. The images were unforgiving, indeed downright frightening.

We need unity in our country, but we also must demand accountability. This is why I called for a condemnation of these acts when I took to the New Jersey Senate floor in the days following January 6, 2021 during a debate on a resolution calling for such accountability. I felt then as I feel now that calls for unity without accountability…without a reckoning of the actions and actors who brought about that infamous day will always ring hollow and prevent us as a nation from healing and moving forward.

The very fabric of our country was attempted to be torn apart that day. Many people were maimed and seven people, including three law enforcement officers, died as a result of that attack. People were literally beaten with the United States flag in our nation’s Capitol. When you sit back and reexamine the magnitude of that, when you look at the resolution that was before us that day, some may have quibbled with the words, some may have quibbled about the tone and tenor of that resolution, and reasonable people can disagree on that, but what we cannot and what we should not disagree upon is that ALL of us were attacked on January 6, 2021.

Our democracy, just like our patriotism as Americans, is not the dominion of one particular political party or philosophy. It does not run deeper in any American simply because the nomenclature after their name is marked with a “D”, “R” or “I”. The thread that binds as our motto says, E Pluribus Unum, is the idea that out of many, we are one. One nation under God, indivisible.

Therefore, calling for unity after attempts to overturn a duly certified election, upheld by every court in this land, with no reckoning or accountability for those who created this toxic environment serves only to amplify the very lies that led a mob of insurrectionists to sack our nation’s Capitol. And, it would only harden the resolve of those who fanned those fires and embolden them to try again.

Now, the critical question then arises: What’s next? Certainly, there is a need for accountability, and an ongoing legal and Congressional process addresses that issue as I write this blog. This legal process adds some semblance of order and balance to the need to hold those accountable who perpetuated this stain on our democracy. The numbers speak powerfully. Police arrested more than 700 demonstrators, and more than 150 have pleaded guilty. But, whether those who plead guilty committed felonies or misdemeanor acts, make no mistake about the seriousness of the charges.

“The rioters attacking the Capitol on Jan. 6 were not mere trespassers engaging in protected First Amendment conduct or protests,” according to Beryl Howell, the chief judge with the U.S. District Court, District of Columbia. “They were not merely disorderly, as countless videos show the mob that attacked the Capitol was violent. Everyone participating in the mob contributed to that violence.”

Beyond the issue of accountability, a broader picture here calls for a reassessment of ourselves and our nation. It is as though we are staring in a mirror, examining and judging ourselves as a nation and what we have become. I believe in the goodness and the spirit of the American people. I believe that most Americans are decent, caring and fair-minded. Yet, we should never forget the assault on our institutions and the U.S. Capitol that represents these ideals.

I would offer a suggestion. Let the legal process hold accountable those who would tear down our noble institutions. And let us, on this anniversary of the January 6th attack on our nation’s Capitol, remember to celebrate the finer characteristics of a country that we know and love and look inward to our neighbors, regardless of political differences, in a spirit of unity and compromise.