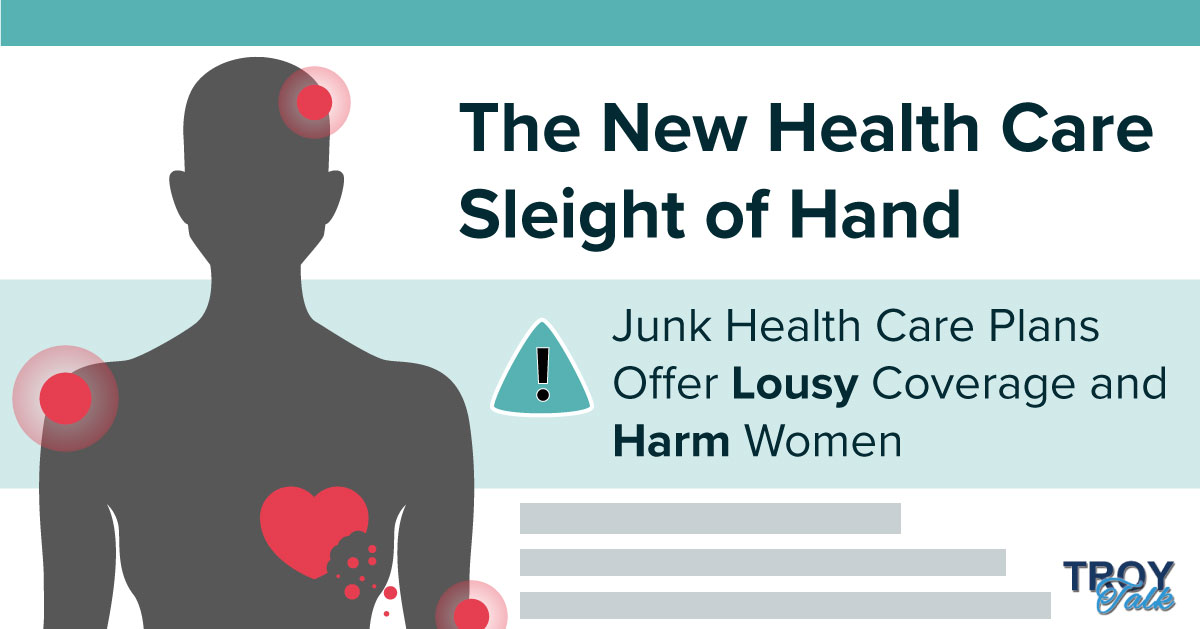 The administrative rule finalized in August by the Trump administration allows states to opt-out of some of the Affordable Care Act’s (ACA) most important consumer protections. These include the requirement that Medicaid and health plans in the marketplaces cover all 10 essential health benefits (EHBs), such as coverage for maternity care, mental health services and prescription drugs.

Their suggested replacement would be “junk plans” that would provide an opening for insurers to offer bare-bones coverage that excludes important categories of basic health care.

The Trump administration and some insurance companies are employing a sleight of hand that fits their heartless approach to medical coverage for Americans, especially women. The administration trumpets the fact that by going through a voluntary marketplace, consumers would have more choices and equal coverage, without necessarily paying more. The “market forces will solve the health care problem” argument is precisely what drove our country to move in a different direction to increase both access and affordability.

The current administration’s prescription for more affordable health care is the wrong medicine to fix the problem. These junk health care plans exist, but they’re essentially worthless for many and potentially too expensive for a great number of Americans. These junk plans simply don’t provide the range of coverage that’s vital to providing comprehensive health insurance. They allow some insurers to say they are offering plans, yet in reality, they are saying “no” to these vital EHBs by simply not offering them. This is where the sleight of hand comes in. They don’t have to say no — and receive public condemnation for it — because it’s not even in the offered package or on the table for discussion.

And how does this translate to the real world, where people are already ill (a precondition) or get ill unexpectedly? The nonpartisan Congressional Budget Office has explained that giving states the option to waive the EHB requirements would put coverage for certain services “at risk” of being dropped, including maternity care, mental health care and certain very expensive drugs. People who continue to need these services “would experience substantial increases in supplemental premiums or out-of-pocket spending on health care or would choose to forgo the services.”

Here’s an example: before the ACA, 62 percent of private insurance plans sold directly to women did not include coverage of maternity services. If insurers drop this coverage, women could pay $17,320 more for a rider that includes these benefits. Eliminating maternity coverage could also exacerbate maternal health disparities, with poor maternal health outcomes already affecting women of color the most. Thirteen million women gained coverage of maternity services under the ACA. If insurers were no longer constrained by EHB requirements, they could pick and choose what benefits to cover, leaving coverage gaps for treatment of pre-existing conditions.

Odd and shameful, isn’t it? Often, because of no fault on your part, a sudden illness strikes, imposing a sudden personal burden. Then, while you carry this new weight, you’re transferred into a wilderness of no coverage and suddenly face the possible specter of huge or insurmountable debt from which you might never recover. It is both unfair and un-American.

Let’s pause here for a moment: Should an ill person in the United States — the richest country on the planet — forgo medical attention and coverage because they can’t pay the premium or have access to all the elements of EHB?

I’m not going to allow that to happen to a New Jersey resident, because we can take further steps towards preventing this administration’s efforts of gutting the ACA.

I have introduced legislation that supplements the “Health Care Quality Act,” which would prohibit the New Jersey Commissioner of Banking & Insurance from approving health benefit plans in New Jersey that do not meet certain standards, including the necessary elements of EHBs. My proposal goes further. It provides for enforcement power. It requires the commissioner to take whatever steps are necessary, under his or her jurisdiction, to prevent anyone from offering or issuing health care plans in our state that don’t comply with New Jersey laws.

This proposal in its simplest terms means that there is no place for your junk (health care plans) in New Jersey. That’s my take, what’s yours?