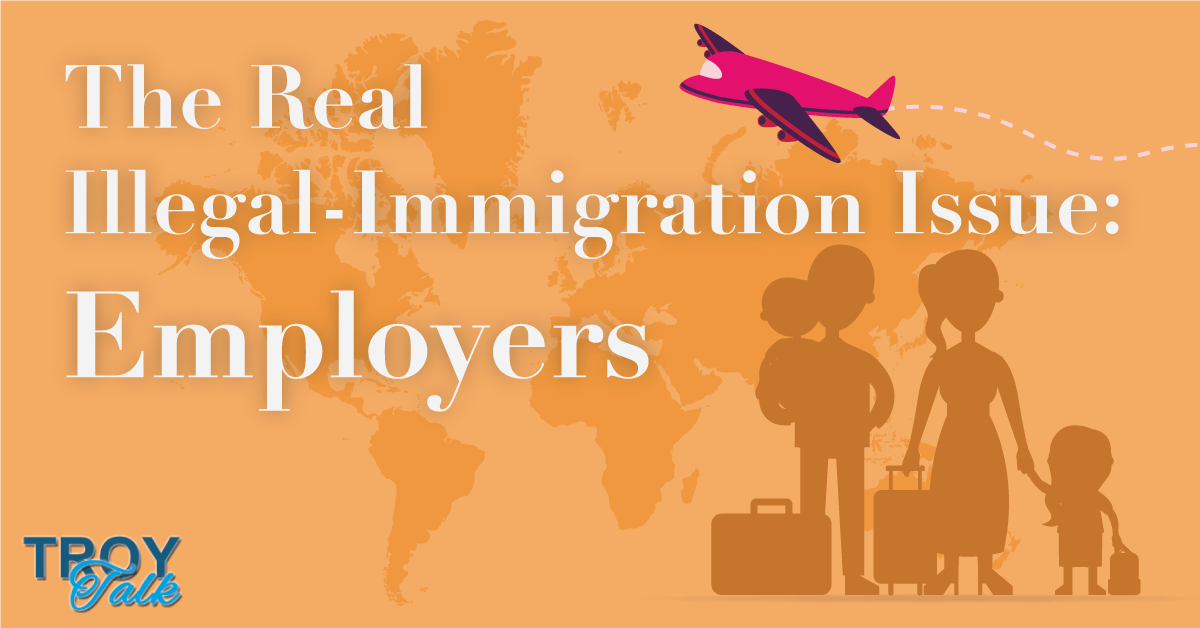 I recently came across the following article looking at the ongoing immigration question in our country from an often times ignored perspective: Should we hold employers more accountable? Now, this issue is one that generates intense feelings on both sides of the debate and the author weaves a fine line in his argument. In my opinion, his perspective on how we should look at this issue stirred some deep and candid conversations with some of my peers.

I firmly believe that employer accountability as a component of the immigration debate should be addressed. It has been historically ignored under both Democratic and Republican administrations. Some create this somewhat ridiculous paradox of encouraging a greater influx of immigrant workers by soliciting those workers with the prospects of jobs, while simultaneously stigmatizing those workers for coming to our country for those opportunities. By ignoring this important piece of the puzzle, we are allowing the exploitation of these workers to continue and creating a "faux" villain to perpetuate class and racial divides.

I hope you will take a moment to read this article with an open mind and then ask yourself if the "solution" that the author proposes can become a piece of the puzzle to address this vexing issue. That's my take, what's yours?

"Our cities and states have the most to lose and gain from how we deal with it. What we really need to do is to enforce the laws we already have.

As he reiterated so clearly in last week's address to a joint session of Congress, our new president wants to spend billions on guards, guns and gates to keep illegal immigrants out of the country and throw out the ones who are already here. If President Trump gets his way, these are changes that would have a profound effect on our states and cities, given the huge numbers of undocumented immigrants who are here and how embedded they are in the workforce and in our communities. That's one reason for the intense "sanctuary cities" pushback we're seeing.

But if illegal immigration and illegal residency are to be reduced, there is an easier, less violent and almost certainly cheaper way to secure our borders: Simply enforce the laws already on the books that prohibit employers from hiring people who are not here legally.

After all, the estimated 11 million undocumented immigrants have not come for the waters, to take a phrase from the film Casablanca. They came to work. Stop their employment and they will not come, and those here already will go home.

Immigration Reform and Control Act, it amazingly was legal to hire someone here illegally to pick fruit, sew clothes or cook meals. If caught, the penalty was all on the worker. Changing this was a huge reform, which organized labor had pushed for for decades.

But after ups and downs in enforcement, and switches in presidents, parties and priorities, what has emerged is close to a dead letter. Businesses now hire illegal immigrants with near impunity. Employers are supposed to collect a federal I-9 form attesting to employment eligibility from every worker, and there is a program called E-Verify which allows employers to quickly check the legal status of a worker. But E-Verify is voluntary, and for the most part the I-9 forms, I am told, simply sit in stacks, unchecked. Fraud, in the form of fake Social Security numbers and similar dodges, is rampant.

But it doesn't have to be this way. What if the Trump administration spent billions on more clerks rather than on more guards? What if E-Verify was mandatory? What if the feds had more bureaucrats checking paperwork instead of agents swooping in to arrest and jail workers? There would be less pain and drama, but in the end the result would be the same. This kind of policy change would be less traumatic for states and local governments to handle. Things would happen, but gradually and inexorably as existing laws were enforced.

Although an array of agencies at the federal, state and local level deal with both immigration and labor law, the scarily acronymed ICE -- Immigration and Customs Enforcement, under the Department of Homeland Security -- is primarily responsible for catching both illegal immigrants and illegal employers. How about less of the former and more of the latter?

Our policies are currently at war with each other. With one hand we build Soviet-style walls across the southern border to keep people out. With the other hand, we happily employ those who make it across.

At the upper levels of employment, there is at least a functioning system. Tech workers from, say, India or Taiwan can get an H-1B visa for workers in "specialty occupations." But for lower-level, and increasingly even mid-level, jobs, that's not the case. There are laws and even programs, but they aren't enforced or well funded.

The reason such a change hasn't taken place already is probably because to do so would threaten what is at the heart of the immigration debate: what you pay someone to do a job. "There is a huge interest in cheap labor," says Josh Bardavid, a New York City lawyer specializing in immigration. "Both sides don't want to get rid of this. That is what no one is saying or admitting."

Both liberals and conservatives, it seems, like getting things cheap. Illegal immigrants make our meals, tend our children, build our homes and so much more. Reducing that will hit middle- and upper-class Americans in the pocketbook.

While any change would be painful, in my view it is unfair both to the illegal immigrant and to the legal American worker to employ someone with few if any rights, including even simply being paid, much less complaining about unsafe work practices or lack of bathroom breaks.

But if illegal employment is not right, it's also true that people who have worked, paid taxes and raised families here, in many cases for decades, are Americans, legal or not. It's not their fault that we chose to hire them illegally while simultaneously encouraging them to school their children here and sink down other roots. So if we start enforcing labor laws, we also need to create a path to citizenship for those illegal immigrants who have been here for a while.

Although it sounds big, our nation and population can absorb 10 to 12 million people pretty easily. The problem is that these people are not citizens. This is a cancer on our employment practices and on our democracy, since non-citizens can't vote. The whole practice of guest workers should be examined in this light. A good start would be a law that requires any foreigner working here for more than, say, five years, to either become a citizen or stop working.

Both liberals and conservatives should be able to agree that illegal employment is the real problem. Democrat Bernie Sanders and Republican Donald Trump had remarkably similar positions on this during last year's presidential race. We won't ever completely stamp out illegal employment, particularly of the cash-based, under-the-table variety. But we can drastically reduce it. And we can do so in a fair way, one that puts responsibilities and costs on everyone involved."