The U.S. Census: Count Yourself In 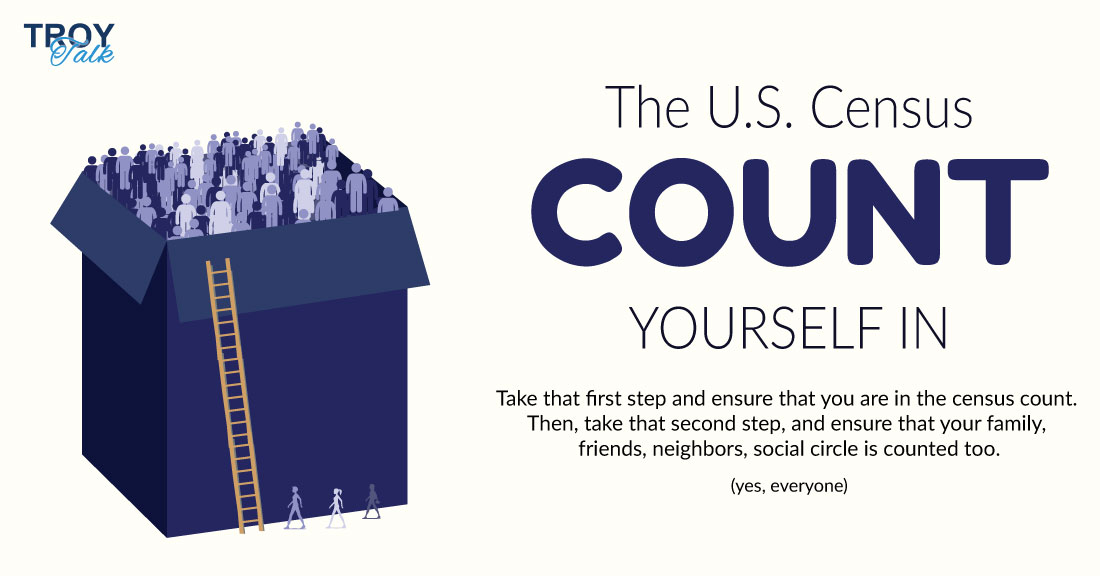 Sometimes critical moments in life come down to a simple decision: Are you in or are you out? That moment of decision is occurring this year.

I’m referring to the U.S. Census, a once-a-decade event, enshrined in the U.S. Constitution, whose aim it is to count every person in America. Yes, it is a legal requirement that mandates the counting of everyone in the United States regardless of race, color, creed or status.

The census count and your presence in it are vital to our political influence and economic health in Burlington County and the entire state of New Jersey.

If  New Jerseyans fail to register, we limit our influence in Washington, D.C., and we fall prey to a dwindling yet important source of federal funding.

My concern is very real, because we don’t need a repeat of what occurred in the previous census, conducted in 2010. New Jersey lost a congressional seat, and some of the blame rests on the estimated 31,000 to 180,000 people not counted, according to the U.S. Census Bureau. They link the undercount to hard-to-reach areas in our urban cities. These are huge numbers and we must ensure that there is no repetition of that counting failure.

First, let’s start with the basics. Visit www.census.gov. It provides a sample of the census form that you must fill out. The form is bilingual (English and Spanish),  and of course, it’s free. You can also respond to the census online, over the phone or with a paper questionnaire. (A full example of the form will be available in March 2020, with a URL for online responses and a number for telephone responses.) The form might appear to be intimidating, but it isn’t. If you need help with the form, you can contact a regional Census Center at https://2020census.gov/en/contact-us/rcc.html to speak with a Census Bureau staffer to identify a local census taker or connect with a partnership specialist.

Second, let’s understand that precisely what you and many other citizens in Burlington County and the rest of New Jersey have to loose. The first is a loss of your legislative voice. Because the census determines how many congressional seats New Jersey has, a loss would mean that you could lose a New Jersey representative.  Though we might disagree at times, all of New Jersey’s legislators in Washington work on your behalf.

Third, the number of residents in a community and the state determines in large part how much federal funding we receive. New Jersey receives $22 billion in federal funding and more than $3.86 billion for Burlington County alone. The loss of this funding is a critical threat to our well-being. When discussing this fiscal picture with constituents,  I point out that New Jersey historically is one of the most underfunded states in the U.S. when it comes to receiving federal funds. We send more money to Washington than we receive. We can’t afford to keep losing this money because it’s an unfair trade-off.

Fourth, if we dispense with the economic statistics, let’s discuss what occurs at the local level, one that many of us might recognize.  We risk losing funding dollars for Medicaid, Medicare, SNAP food assistance and SCHIP, the federal children’s healthcare program. College students are at risk with a loss of Pell grants and college loans. Our infrastructure, already under dire stress, could lose much-needed funding. And students at public schools would lose valuable career and technical training. The list goes on, but what I wish to stress, and which is the most disturbing aspect of this lost revenue, is that the burden would fall upon our most vulnerable population.

Fifth, be counted. In previous blogs, I have referred to voting in elections as one of the most cherished and sacred practices in a democratic society. I still feel that way. But a census is the system we have, for counting who is part of this great country.

Start with yourself. Take that first step and ensure that you are in the census count. Then, take that second step, and ensure that your family, friends, neighbors, social circle — yes, everyone — is counted too. It will make for a better Burlington County, a stronger and more prosperous New Jersey and a better reflection of democracy operating through its census system.