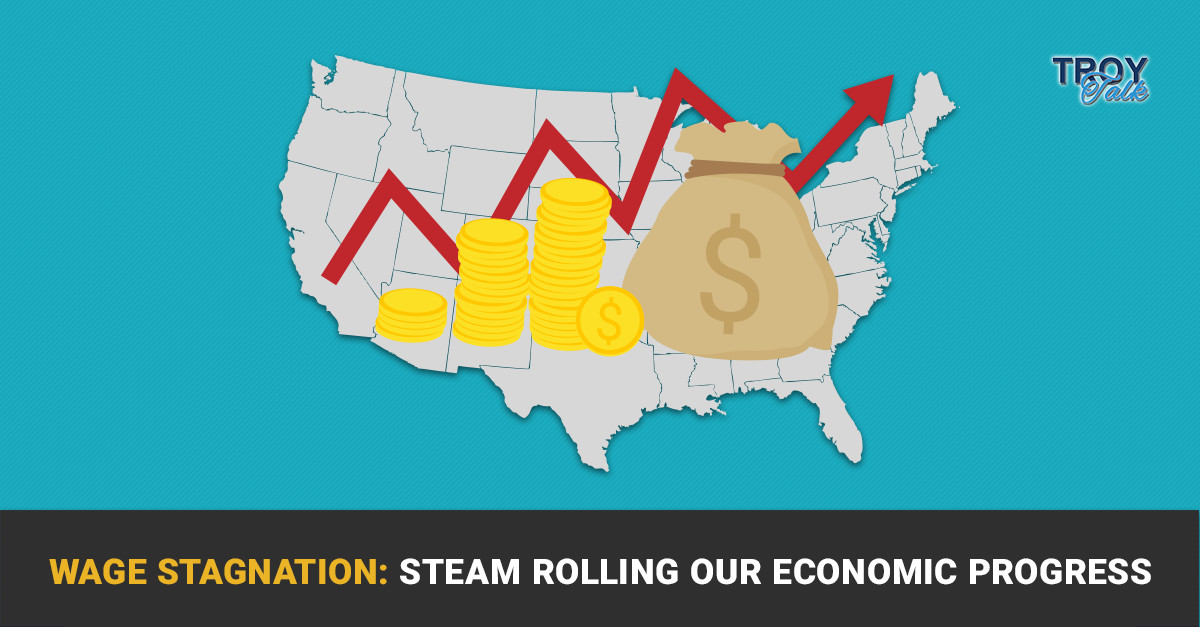 It’s the condition where we are trying to move forward a bit economically yet never seem to quite cross that modest threshold we’ve set for ourselves. Worse is the situation where we are working as hard as we ever have, are being cautious with our spending, yet we’re still falling short. It’s like the proverbial hamster wheel. You keep running and you even pick up speed when necessary, but in the end, you never go anywhere.

Wage stagnation amongst our workforce has most recently become a central talking point from policy leaders of all political stripes.  This underscores and illustrates the importance of this component in the ongoing debate about combating poverty and kicking into high gear our fledgling economy. What should be most alarming to anyone who cares about this issue is that as productivity in our economy has increased, wages have not kept pace. This imbalance exacerbates the problem and damages the lifetime earning potential of our workforce. It also has real financial costs to all taxpayers, as the social safety net has been expanded in an attempt to weather the effects of this imbalance.

The Economic Policy Institute put it plainly. “Between 1979 and 2013, hourly wage growth stagnated for the vast majority—even while those at the bottom relied increasingly heavily on their wages to make ends meet. At the same time, the vast majority of annual earnings increases for the bottom fifth were due to increasing work hours, not rising wages.” The Institute says that this period of stagnant wages for low- and middle-income households greatly contributed to wage inequality and increased poverty.

There is an element that might suggest if people just worked harder they could, in fact, earn more money.  I listen to this politely, but it doesn’t marry up with what I see and hear from my bosses, the residents of the 7th Legislative District. The news is that they are working harder than ever before, and if the inflation rate had not been kept in check, we would have even more people in poverty. This is particularly emotional to me when I meet people who are holding down an extra part-time job to make ends meet. They’re not laggards by any means or simply sustaining themselves on the public assistance rolls. Rather, some are simply our friends and neighbors who want a comfortable, middle-class life for themselves and their families just like you and I.

Some, not all, in the business world might prefer to keep wages in check because it leads to an increased bottom line. This thinking is shortsighted because many of the customers that they are hoping to be able to purchase their goods and services do not have the disposable income to make those purchasing decisions. Therefore, working collaboratively to increase wages is exactly what our economy requires to effectively work for everyone by striking the proper balance. The overwhelming research and statistical evidence supports this notion as the data shows that we are falling behind in this regard.

So how do we begin to fix this? It begins with pragmatic solutions that do not demonize businesses or undercut their workers ability to earn the necessary income to keep our economy moving. It requires diligence from government to eliminate wage theft (illegally withholding wages or not paying benefits), strengthen workers’ collective bargaining rights, and reduce regulations that stifle growth without compromising environmental and labor standards.

It also requires investing in education from our early learners to those looking to re-tool their career later in life. Our greatest asset is our human capital and investing in that capital will lead to hire earning potential over the lifespan of a worker. These, amongst many other ideas, are what make our ability to ensure that everyone benefits from a shared prosperity and not just a chosen few.  All of these solutions begin with elected leaders everywhere placing a premium on the economic welfare of those who sent them to be their representative.

We need to ensure that everyone has a fair chance at entering or remaining in the middle class. Our country’s great compact to its citizens has always been the opportunity for a better life through hard work. Currently, we are seeing this promise being eroded as higher levels of productivity have not translated into higher wages and earning potential for too many Americans. And, New Jersey is not immune to that dilemma. Our state’s middle class is more than just some amorphous data point on an economist’s chart. It is the backbone of who we are. It is what drove our nation’s prosperity in the past and can do so again. Developing a policy to achieve that goal will take the cooperation and the political will of individuals of all leanings to set aside ideological barriers, in order to benefit the people of our great state. Are you ready?  That’s my take, what’s yours?