Who Are These Special Interests Fighting NJ's Dark Money Law? 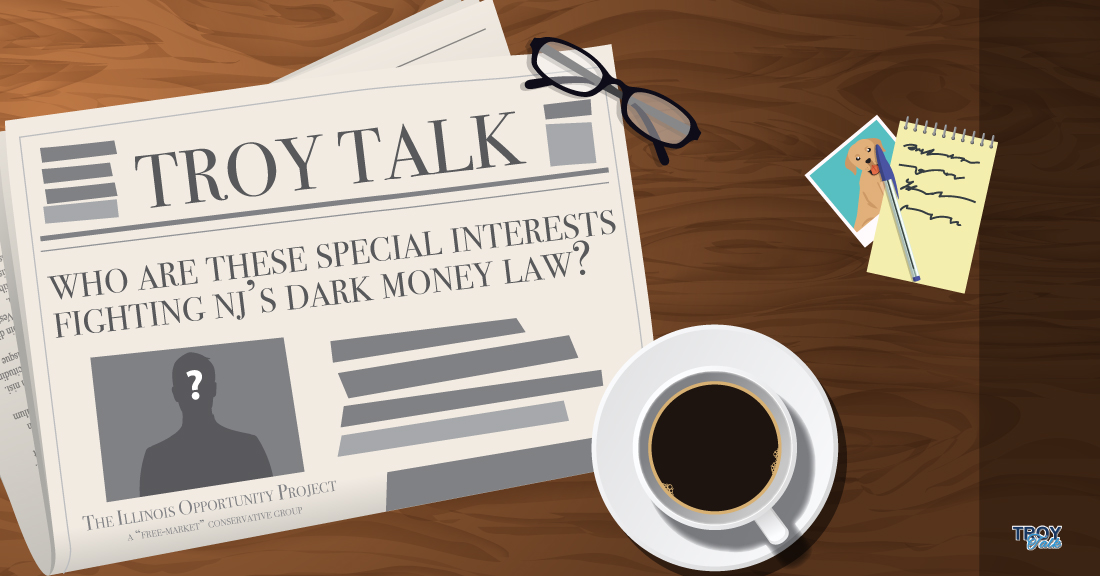 Several months ago, I wrote about the urgency needed to pass my "dark money" reform legislation. In spite of bitter opposition, our effort to shed light on dark money in New Jersey made great progress when Governor Phil Murphy signed the reform bill in June.

In essence, this new law was designed to bring transparency to the activities of independent expenditure committees, and the role their campaign contributions play in controlling our elections, the formation of our public policy, and ultimately our democracy. It is called "dark money" because it does just that - it keeps the public in the dark about who is truly behind the ads they see, hear, and read. The source of the money behind it all is a mystery.

None of us expected the opponents of this legislation –some well-intentioned, some not –to just go away quietly. However, I was disappointed and dismayed this week when I read about the groups bringing legal challenges against the law.  One group involved in the litigation, the Illinois Opportunity Project, is particularly concerning.

The Illinois Opportunity Project is a “free-market” conservative group out of Chicago, Illinois, who has announced their intent to try to influence public policy here in New Jersey. In Illinois, this group is actively trying to silence the voice of voters through its efforts to have the legislative maps redrawn. It also hasn’t gone unnoticed that they are represented by the Liberty Justice Center, which led the charge in the Janus v. AFSCME decision. This group worked diligently to silence the voice of workers through its legal actions. The Janus decision effectively undermined the organizing rights of workers to create better conditions in their workplace.

Now, the Illinois Opportunity Project wants to undermine New Jersey’s voters. It has turned its focus on our effort to achieve a more open and transparent political process. It is complaining that under New Jersey’s new dark money law they “would be required to register and disclose its donors to the Commissioners and its sponsorship of certain messages.” Well, that’s exactly the point.

But, New Jersey’s dark money law is not this group’s only target. The Illinois Opportunity Project is trying to undo campaign finance laws in Montana that require greater disclosure for businesses seeking state contracts. It is ironic isn't it? Out-of-state conservative groups are working to block laws here and elsewhere that seek to expose influence. Something is very wrong with this picture.

Besides The Illinois Opportunity Project, another conservative group put a bullseye on our dark money law. Charles Koch and his late brother David used Americans for Prosperity as a tool to deny our attempts to bring transparency to the political process. Their lawsuit triggered a temporary injunction last week delaying implementation of this law.

Make no mistake about the motives of Koch and AFP – they will go to any length so that big money interests can continue to operate in the dark. The Koch brothers gained an infamous reputation for using their wealth and influence as arch-conservatives to support policies that favor the most privileged at the expense of environmental action on climate change, reducing income inequality, and protecting workers’ rights. This is the antitheses to the principles of accountability that I believe in. Like The Illinois Opportunity Project, the Koch organization is attempting to impose its will on New Jersey.

Every dollar spent fighting against our “dark money” law is a dollar spent against transparency and good government. Every minute spent delaying the implementation of this law is one minute more that anonymous and potentially dangerous groups have to sway the public's opinion and distort our democracy.

Yet, in the face of these recent legal challenges, and in the face of the temporary delay in the law’s implementation, I remain hopeful that the court will allow the law to go into effect when it rules on its merits. This is too important to allow Koch or any other group to stymie our attempts.

I firmly believe that the statute that we passed puts New Jersey at the vanguard of public policy with respect to greater transparency and accountability for these "dark money" groups who seek to control our electoral process. I am confident New Jersey’s law stands on strong legal grounds and will be proven so in the court of law. If there is any fight worth fighting, this is it.