Why the Dream Continues 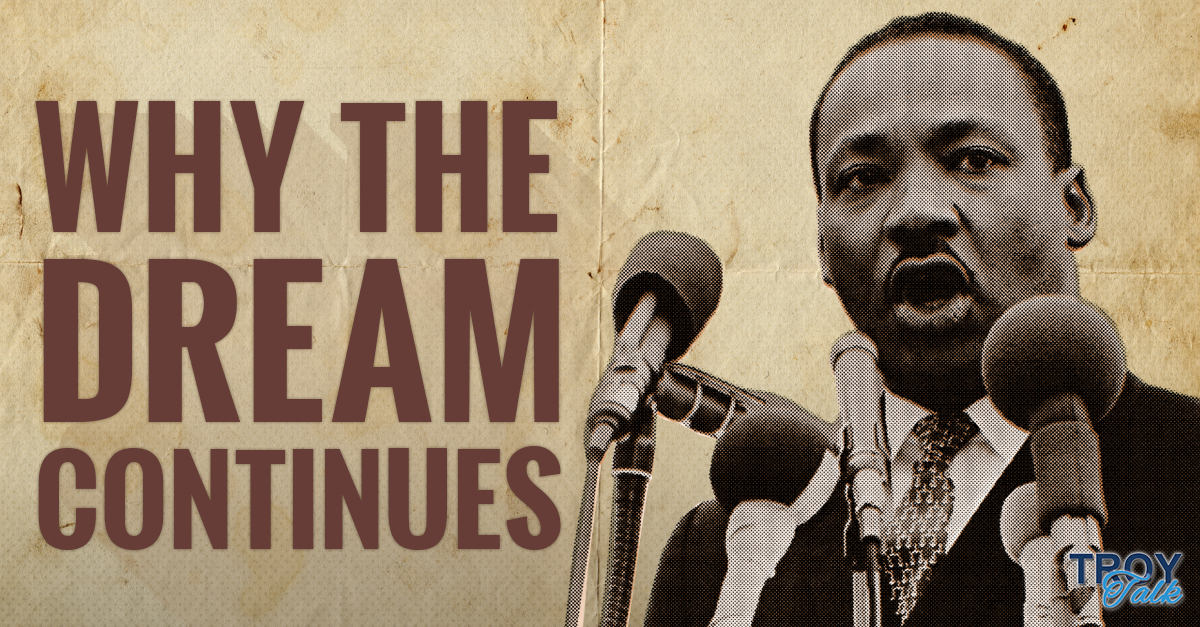 Next Monday is Dr. Martin Luther King Jr. Day. Like many holidays, we might revere the person or the event, but eventually its full meaning slides from our grasp. We oftentimes tend to allow it to enter into the category of a “day off” from work or school. While for some this may be the case, I hope this never happens to one of the greatest champions of human rights in the past century.

We celebrate Dr. Martin Luther King Jr.’s birthday on the third Monday of January. (His actual birthday is Jan. 15.) Dr. King, who was assassinated in 1968 at the age of 39, led a lifelong crusade for civil rights based on nonviolence and his Christian faith. It was a tumultuous time, when African Americans remained second-class citizens in their own country. His words, actions and his ability to inspire sparked one of the most successful nonviolent social change movements in history. All Americans owe him a debt of gratitude for leading this country, albeit still imperfect, on a truer road to equality.

And then, of course, there is today. While Dr. King was passionate about the movement, he stands in stark contrast to the lack of restraint that many of today’s politicians display. His “Letter from Birmingham Jail” is a remarkable example of his lack of personal animus  toward the racist Bull Connor (Birmingham’s Commissioner of Safety), whom he referred to in the letter as “Mr.”  Dr. King demonstrated restraint because, I suspect, he decided to  take the high moral road when confronting those with whom he disagreed.

Dr. King was a man of ideals who espoused the greater good with an eye on the larger message of equality, fairness and dignity. His calm in the face of vicious personal hatred and physical danger and his restraint in responding to these threats remain a valuable lesson for all elected officials today, who sometimes prefer a personal verbal slugfest over thoughtful debate based on ideas and goals. The personal and vocal derision that many in our body politic today level at each other not only muddies the issues; it often speaks volumes of their character.

Our challenge today is to not let the politics of personal destruction and government by soundbite to distract us from striving to achieve that more perfect union. Our country’s history is replete with examples of leaders like Dr. Martin Luther King Jr., who at great personal peril, worked to accomplish this goal. All of us in public service have a responsibility to the men and women whom we represent, to elevate our discourse and our ideas to a level worth of the greatest country in the world. Forgoing that responsibility amounts to a dereliction of duty, and should deem those who do, unworthy of this high honor of representing our fellow Americans in public service.

Dr. King’s legacy is firmly entrenched in history and, for many of those who remember him when he was alive, in their collective memory.  But, I believe that occasionally some truly great men leave a message behind that will resonate for centuries afterwards. Like Lincoln and the Gettysburg Address, like Winston Churchill and the “We shall never surrender” challenge, Dr. King left us with his, “I have a dream speech.”  (http://1.usa.gov/1SgZNFq).

On the anniversary of his birthday, it’s worth a read again….and again. That’s my take, what’s yours?