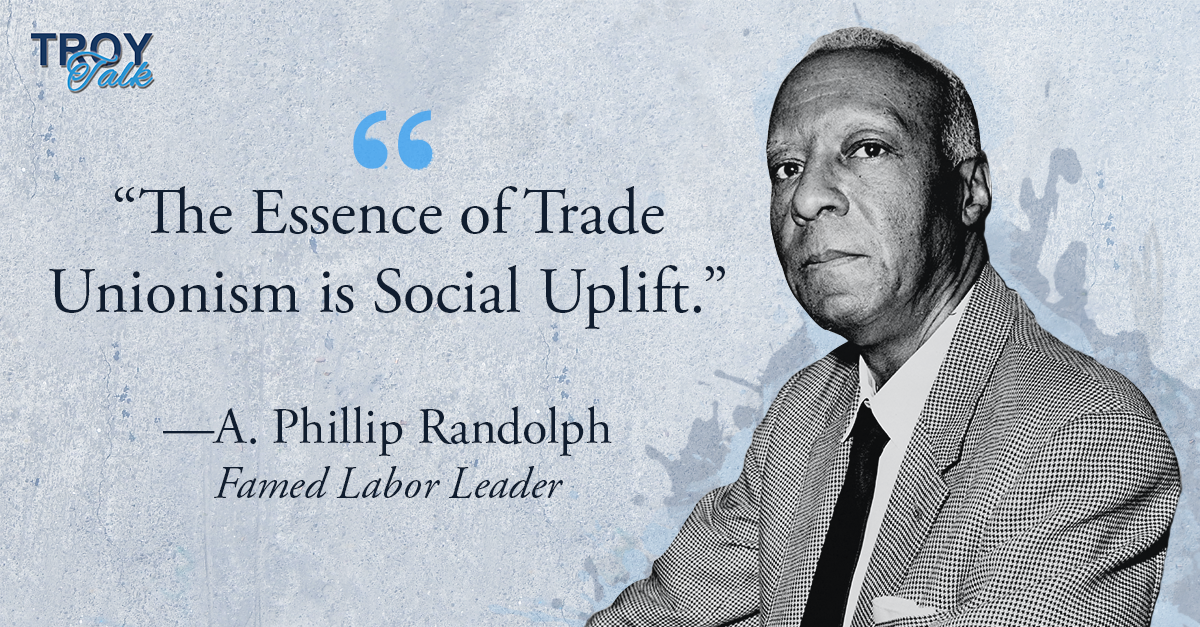 Famed labor leader A. Phillip Randolph once opined that “the essence of trade unionism is social uplift.” That sentiment embodies what the mission of trade unionism was at its inception. A foundation built upon protecting workers from an abusive system and ensuring that those individuals received a livable wage and reasonable benefits. As a member of the Carpenters Union and raised in a union household, I readily admit that I am biased towards seeing the benefits of unions and recognizing their important role in our economic and political structures. However, the question that we should more broadly ask ourselves today, coming out of the shadow of another Labor Day holiday, is whether or not unions still matter in our country.

Oftentimes our vision can be clouded when it comes to addressing this question, because we seldom consider what life would be like without the advances made by organized labor. For example, suppose the boss told you that next week you had to work 12 to 16 hours, every day. No holidays. Suppose you never got a raise, but saw prices for food and necessities creep up. If your spouse has a baby, how would you feel if the employer said, “You have to pay for the delivery and hospital care.”

And taking time off after delivery? What’s your reaction if the employer denied such an “outrageous demand”?

Unions gave us an eight-hour workday and the 40-hour workweek, collective bargaining and many other benefits we take for granted. Frankly, benefits that are enjoyed whether or not you are a member of a union or not. Now, some may argue that those accomplishments were fine in their day, but in today’s marketplace unions are an anachronism.

Sadly, they are mistaken.

Unions play an important role in reducing wage inequality, especially for low- and middle-income workers and minorities. Additionally, unions have been instrumental in raising wages for female, black and Hispanic workers, whose wages have historically trailed white males, through “wage transparency,” allowing workers to know what others earn. No one wins, either individually or as a society, if you’re stuck at the bottom of the heap. When you earn more, you will spend more and you begin adding to the overall health of the economy.

On average, union workers earn about 13 percent more than their nonunion counterparts, and unions’ success has led to positive unintended consequences, creating a spillover effect for nonunion workers. Often, nonunion workers gain in wages and benefits that a union negotiates because it becomes the standard for everyone in the industry. In research conducted by Harvard University’s Bruce Western and Jake Rosenfield, it showed that after adjusting for core determinants of wages, such as education levels, nonunion workers in strongly unionized industries and areas received substantially higher pay. Thus, the economic benefits of a powerful labor movement rebounded to unorganized workers as well as union members.

It’s true that the golden age of unions (post-World War II through the 1960s) has passed. But what we’ve lost in the manufacturing sector is slowly returning by way of a new generation of workers — with a need for different expectations and demands – that includes office workers and medical personnel.

Leslie Tolf, writing in the Huffington Post has an especially interesting take on unions and millennials.

“It should come as no surprise then that the equal sense of self-worth and community they’re [millennials] known for cultivating directly parallels the ideas that unions have always stood for: an equal voice for everyone; shifts in power from technocratic to democratic; new ways to solve problems, both in and out of the organized structures that contributed to them.

“The beauty of the labor movement, and the beauty of the generation now at its fore, is that it’s not a fight against business or corporations. The beauty is that a decent standard of living, with the right mix of tenacity and challenge to the status quo that characterizes millennials, can benefit their families, communities and employers as well — and at a time when the labor movement needs it most.”

This leads to the question, “who are union members”? They are more than the ubiquitous hard hats you see walking on steel beams at a commercial construction site.

46 percent of union members are women.

36 percent are people of color.

42 percent have a bachelor’s degree or higher.

That said, today’s labor movement is in a precarious position. As ongoing attacks, both in courthouses and statehouses, by anti-union groups continue to severely undermine organizational models within trade unionism, organized labor has not effectively pushed back with a concerted message of the ongoing benefits of the labor movement. Unions also have to look internally to ensure that the mission remains pure and focused on advancing the causes of the working men and woman of our nation and not on personal agendas.

We need to recalibrate our focus as union members so that we are seen as value-added partners to the employer, while continuing to safeguard the rights of the employees. Further, unions need to reinforce the message that as productivity continues to grow, the engine that fuels that productivity (the worker) is able to also enjoy the fruits of their labor through better wages and benefits.

Unions mattered at their inception and I firmly believe that they still matter today. If workers want to have a state in our country’s future prosperity, organized labor is the best means to advance their cause. Absent that, the voices of the American worker will be drowned out by the well-connected and well-heeled.