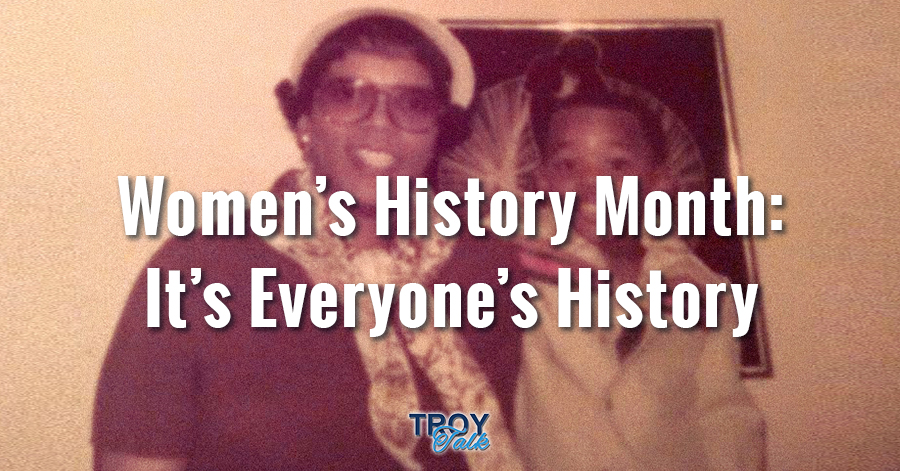 The names of famous women spill from our lips in unending admiration. From Abigail Adams, a great influence on two future presidents, to Clara Barton, founder of the Red Cross. From Rosa Parks, who refused to take a backseat to anyone to Shirley Chisholm, the first African American women elected to Congress. From Dolores Huerta who as a labor and civil rights leader championed the rights of farm workers to Esther Ross, a champion for Native American rights, and Sandra Day O’Connor, the first female Supreme Court justice, we can’t help but feel a certain degree of awe in the wake of their accomplishments and the trials they had to overcome, when women were still usually regarded as less than equal to men. Some would argue that this climate has not improved enough.

There is an often-repeated quote, “behind every strong man,there is a great woman,” that we probably treat as a cliché. We shouldn’t. We only need to see strong men whom we admire,and if we probe just a little more, we will often see how that man’s strength exists because he had the support of a woman who allowed and helped him to be strong.

I think though that quote should be refined to state that "behind every strong man, there is a great woman standing by his side." In my opinion, this better exemplifies how this relationship really is. Standing strong together facing whatever comes is a more accurate depiction of the role that history's heroines played.

While the women I mentioned have created a public legacy of accomplishments, so many more are unknown, and yet their effect on daughters, sons, husbands and their communities have also left a permanent and personal influence. Our grandmothers, aunts, sisters, cousins, nieces, friends and neighbors who all taught us something that remains with us to this day. This day is a tribute to them, too.

Because this is a month of historical perspective, our expectation is to take a long look back. However, we shouldn’t allow ourselves to become complacent about the future. Yes, women have won many battles for equal rights, but other struggles remain. We must continue to build a future generation of activists and believers who would work for equal pay for women, protect women’s reproductive rights and ensure that our democracy, in practice as well as in law, reflects our society as a whole.

As the father of a daughter, I want her to have the same opportunity to succeed as her two brothers. In that perfect world we yearn for, it would be comforting to believe in a society that tracks the record of individual accomplishment without the slightest consideration given to gender. We still await that day.

When I mentioned the influence of women who might have entered the public historical record of known accomplishments, I am reminded that many of us have a woman (or women) in our lives whom we loved and who had a major influence on us. My mother was one of those.

Those who know me, know of the great influence that my parents have had on me. My mother's love, inspiration, advice and guidance remain a part of me even though she is no longer here. It's the values that she and my father instilled in me that continue to help shape my steps. I salute her not just in March, but by every day trying to live up to the high bar she set for me.

So, this month take a moment to salute the great heroines of your life. The women who's indelible impression on your world, has made it brighter because they were placed along your life's journey. I have too many to name but, I am grateful to all of my female role models and mentors for making my journey more complete. That's my take. What's yours?