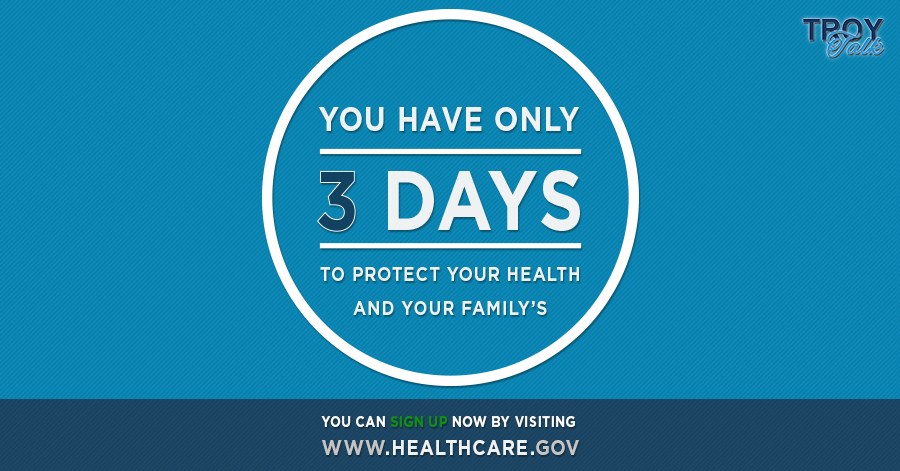 The deadline for 2015 enrollment is Feb. 15, a short three days before the deadline. You can sign up NOW by visiting www.HealthCare.gov.

Please enroll. It is your right under the law. If there has ever been a reason for participatory democracy, I can hardly think of a better one than participating in the Affordable Care Act.

This actually is a simple, three-step process. The first is to be aware of the impending deadline, which is the thrust of this blog. The second is to take action —NOW — and begin the enrollment process immediately after reading this blog. You can enroll here: www.HealthCare.gov. The third step is to take a breath and think of who else you might know that is eligible but unaware of the deadline, or consider contacting someone who might falsely believe they are not eligible.

Despite the positive benefits for eligible people to enroll, there is another reason you should register. As you know, I believe that a positive approach is usually preferable to the stick. However, if you do NOT enroll and do NOT have health insurance there is a penalty that might shock you during tax time. Failure to obtain coverage will result in a $325 fine or 2 percent of yearly income (whichever is higher). That’s a stiff penalty if you are watching your pennies. And you might see a much smaller tax return check if you get one.

Despite the naysayers of the Affordable Care Act, which critics have dubbed Obamacare, this legislation strikes at one of the very essential core values that we should have as a nation: No person should be prevented from obtaining medical coverage because they don’t have the financial resources.

The simple fact is that we pay for the uninsured currently now, through our state's charity care system. It would be more prudent financially to make sure that these individuals are insured, so that we can limit the higher price tag of emergency room visits through a coordinated system of preventative medical care.

Media reports note that some have taken to the courts to try to overturn this law. Next month the United States Supreme Court will again visit the legality of the Affordable Care Act through the King v. Burwell case. The philosophical thread they espouse is an attempt to raise the issue of whether citizens have a right to health care. In my opinion, it is hard to fathom that a country as great as ours would allow its citizens to not have access to health care. I have said it before, and allow me to repeat myself: “Some may argue whether access to health care is a right, but it is the law of the land.”

In issues of this magnitude, represented by the Affordable Care Act, there are always contrasting stories, from the personal to the ones on a larger canvas. On the larger backdrop, the President's health-care law is a win for everyone, NOT just those who are insured. “The law will cost about 20% less over the next decade than originally projected, the Congressional Budget Office reported … in part because lower-than-expected healthcare inflation has led to small premiums,” writes David Lauter of the Los Angeles Times. “So far, the number of uninsured Americans has dropped by about 12 million. By the end of 2016, 24 million fewer Americans will lack insurance, the nonpartisan budget office forecast.”

This is a win for all Americans.

On the personal side, we can’t repeat it enough. Everyone gets sick at some point, and some people get really sick. The question is are you prepared to face your own illness or that of your family? Are you willing to shortchange your ability to protect yourself and your family? I’m sure you want what is best for all, and a few minutes are all it takes to gain that protection and peace of mind.

This is a win for you and your family.

Protect yourself and the ones you love. Register now at www.HeathCare.gov.

And don’t forget to urge everyone who is eligible to register too. That's my take. What's yours?